Metcalf looks to continue his summer success in Tashkent.

WHAT: 2014 FILA World Championships (freestyle and Greco Roman wrestling)WHERE: Tashkent, UzbekistanWHEN: first round competition begins at 11 PM (CT); subsequent rounds continue later in the evening/morningHOW TO WATCH: WATCH IT LIVE AT 11PM (CT) or on Flowrestling

Brent Metcalf was part of the foundation of the Hawkeye wrestling reemergence. After Iowa had experienced a drought in team national championships, the University decided to switch directions and brought back Tom Brands, a former assistant coach under Dan Gable and Jim Zalesky, to head the program.  Brands was also a decorated competitor, winning three national championships and an Olympic gold medal.  One of the wrestlers Brands brought with him to Iowa was Brent Metcalf, who had been one of the most sought-after recruits in the nation when Brands lured him to Virginia Tech. After sitting out a year due to transfer restrictions, Metcalf entered the lineup in 2008 -- and immediately took the Big Ten and NCAA by storm.  He made three NCAA finals appearances and won two titles. During that stretch the Hawkeyes also won three straight team championships able to three-peat in the team title race, which was certainly no coincidence -- Metcalf was undeniably the engine of those Iowa teams.

When Metcalf's college career ended and he began making preparations for his international career, it was no surprise that he chose to stay in Iowa City and train with the men that had made him one of the best college wrestlers of his time. In Tom and Terry Brands, Metcalf had two of the best and most celebrated lightweight wrestlers of the last 30 years in his corner, two men who had also experienced freestyle success on the international scene.  (Iowa also had Mike Zadick as a coach in those days, which didn't hurt, either.)  Metcalf seemed prime to continue the success he had experienced as a collegiate wrestler when he hit the next level.

Unfortunately, it didn't quite work out that way.  Freestyle wrestling had evolved quite a bit by that time -- and not necessarily for the better.  While Metcalf never had "bad" technique (his high-crotch has always been very good) or was a poor tactician (his final collegiate match, against Ohio State's Lance Palmer in the NCAA finals, was an expertly-wrestled match against an opponent who had beat him a few weeks earlier in the Big Ten Tournament finals), they weren't necessarily the first things that came to mind when you thought about Metcalf's strengths.

In college, Metcalf used his superior stamina, conditioning, and aggressive approach to wear down opponents; by the third period, most opponents facing Metcalf were completely spent, making them easy prey for a bonus point loss.  Sadly for Metcalf, those strengths were de-emphasized considerably on the international scene at that time -- matches were best of three periods, scoring wasn't cumulative, and there were ample breaks.  Stalling was popular -- and rarely punished.  None of that worked in Metcalf's favor.  In college, Metcalf would occasionally concede an early takedown to an opponent, knowing that he would have ample opportunity to score points himself later in the match.  In freestyle, against opponents with considerable skill and powerful defense (as well as rules that were more forgiving for defensive wrestlers) conceding an early takedown could be catastrophic.

So Metcalf endured a rough start to his international career.  He was able to make a few World Teams (although he heartbreakingly came up short in his bid to make the U.S. Olympic team in 2012 at the Olympic Team Trials in Iowa City), but he was never able to do any real damage on the international scene, with most of his success coming within the United States. It wasn't until 2013 that Metcalf started to begin enjoying success in freestyle akin to his collegiate glory days, winning the Sargsyan International and the U.S. World Team Trials and making the World Championships Team for the first time since 2010.  Unfortunately, success at the World Championships eluded him yet again and he suffered a first-round loss to end his tournament before it even had a chance to begin.

But the rule changes instituted by FILA last year in the wake of wrestling's exit from (and then return to) the Olympics have benefited Metcalf tremendously.  Those rule changes include two three-minute periods, cumulative scoring over the entire match, and improved anti-stalling rules. This year Metcalf has been a man possessed.  He went undefeated at the World Cup in March and cruised through the U.S. Open (where he blanked opponents, 39-0). He then went on to win a big match against the current top-ranked wrestler in the world at 65 kg, Russian Magomed Kubanaliev, at the Beat the Streets event in New York, and later won two matches against Jordan Oliver to claim his third World Team spot at the World Team Trials. After winning three matches at the Golden Grand Prix in Azerbaijan, Metcalf broke through into the FILA rankings, and now finds himself in the middle of the pack at #11. (Again, a reminder about the rankings: they only factor in results at official FILA competitions, which doesn't include the Beat the Streets event.  There probably aren't actually 10 guys wrestling better than Metcalf at 65 kg right now, but so it goes.)  It appears that Metcalf is wrestling in his prime -- just one of those accomplishments would qualify as having a pretty successful year.

Metcalf is currently riding a tremendous hot streak in freestyle, with his recent win over Haislan Garcia of Canada at the Golden Grand Prix being one of his strongest wins yet (technically the win over Kurbanaliev came in an exhibition event) as Garcia was the 7th place finisher at the 2012 Olympics, and the 8th place finisher at the 2013 World Championships.  Major international success is the one thing that has eluded Metcalf so far in his career, but if Metcalf wrestles like he did at the Grand Prix, or at the U.S. Open, there may be nothing that anyone on Earth will be able to do to stop him from reaching the peak and bringing home gold for Team USA.

Metcalf's draw looks pretty favorable one from our perspective.  Unranked Seongun Park (South Korea) will be Metcalf's first opponent; he should be a very beatable opponent.  That would set up a potential second round match with #19 ranked Mustafa Kaya (Turkey). Kaya is ranked for a reason, but with the way Metcalf is wrestling he should prevail, which would set up a potential rematch with #12 Magomed Muslimov (Azebaijan) in the quarter-finals.  Metcalf beat him 6-6 (via tiebreakers) with a late throw at the Golden Grand Prix, so expect a very good battle between these two if they square off.  Moving down the bracket, Sayed Ahmad Mohammadi (Iran) could be Metcalf's semifinal opponent. Mohammadi won the Asian Championships this year and is currently ranked #9.

On the top half of the bracket is David Safaryan (Armenia), the defending world champion -- sort of. He won the 2013 World title at the old weight class of 66 kg/145.5 lbs. He's currently ranked #4 in the world.  The top half of the draw also features defending bronze medalist Mandakhnaran Ganzorig (Mongolia), who's definitely a threat to make the finals this year (and who happens to be Friend of the Pants Mike Riordan's pick to win gold at this weight). Safaryan and Ganzorig could square off in the second round, which would be quite a showdown.  The top half of the draw also features a few names that might be familiar to college wrestling fans -- Boris Novachkov and Franklin Gomez.  Novachkov, a career 141er at Cal Poly who earned All-America honors there, is representing Bulgaria, while Gomez, a career 133er at Michigan State who won a national championship there, is representing Puerto Rico.

Here is a link to ALL of the brackets.  In addition to Metcalf, the U.S. also has Jimmy Kennedy (61 kg), Jordan Burroughs (74 kg), and Jake Varner (97 kg) in freestyle action today.  The U.S. won just one medal in Monday's action (Tervel Dlagnev brought home a bronze medal at 125 kg), but their medal odds look better on Tuesday.  Burroughs has been nearly unstoppable at the international level and Varner won a gold medal at the 2012 Olympics, while Metcalf has been wrestling at an extremely high level in 2014.  Best of luck to all the U.S. wrestlers.

We'll update the comments of this post with results.

BONUS! You know why we have a good feeling about the U.S. performance at this year's World Championships?  Because the coaching staff includes both Tom Brands AND Cael Sanderson!  The rest of the world is gonna tremble in the face of that Mega-Powers alliance! 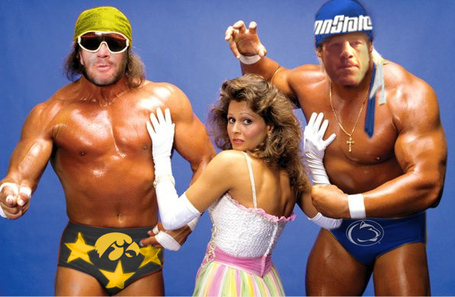 (H/T to Tony for his killer work on this 'shop)