No Penn State and no Ohio State makes me a sad blogger. 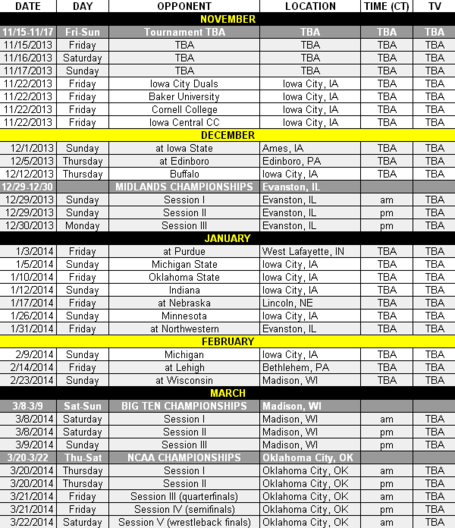 Regrettably, the schedule is most notable for who isn't on it, rather than who is on it. Topping the list of absentee opponents is, of course, Penn State, winners of the last three NCAA (and Big Ten) championships and a big part of one of the most electrifying events at Carver-Hawkeye Arena last season. Joining Penn State on the absentee list are Ohio State (4th in the Big Ten a season ago and tabbed to be a sleeper team this season) and Illinois (5th in the Big Ten a season ago and another dark horse contender in 2013-14). In all, Iowa will play just one team from the top five in last year's Big Ten Tournament: 2nd-place finisher Minnesota. In place of Penn State, Ohio State, and Illinois, Iowa instead will face Wisconsin, Indiana, and Michigan State... the bottom three teams at last season's Big Ten Tournament.

The non-conference slate isn't much more inspiring, frankly. The annual rivalries with Iowa State and Oklahoma State continue and Iowa also repays visits from Edinboro and Lehigh last year with trips to those respective schools this year. There's also a visit from Buffalo and the usual Iowa City Duals, which features the usual uninspiring line-up we've come to expect from that event. So much for the rumors of UNI being one of the teams in that event. UNI, in fact, is absent entirely from Iowa's schedule for the second-straight year, which is unfortunate. Last year we were told that the culprit in the loss of an Iowa-UNI dual was Iowa's trip to New York City for the Grapple at the Garden event; Iowa has no such trip this year, but the Iowa-UNI dual is still MIA. That's unfortunate because under former Iowa assistant Doug Schwab, UNI is a team on the rise and they would have provided a fun challenge for Iowa.

While it's bitterly disappointing that a dual that's become arguably the signature dual of the college wrestling season over the last few years won't take place again this season, it's also not a surprise. We already knew that Iowa and Penn State weren't on each other's conference slate. (In that article, I mooted the possibility of Iowa and Penn State scheduling each other in a non-conference dual meet, and per Ye Olde Trusty Interwebs Message Board sources* the schools did indeed pursue that possibility, but weren't able to make it work. Damn.)

* Also: imagining Cael on a Vespa is delightful.

This absence -- as well as the absence of Minnesota on Penn State's dual meet schedule a year ago and Ohio State's absence on Iowa's dual meet schedule this year -- is further evidence that the Big Ten needs to strongly consider increasing the number of conference dual meets from eight. I'm not sure what that number should be -- 9? 10? Even more than that? -- but eight league dual meets just isn't cutting it because the schedule rotation is eliminating some of the biggest dual meets of the season. Without adding more dual meets to the schedule, the problem is only going to get worse when Maryland and Rutgers join the league next year, too.

Given the attendance issues the sport faces, this issue seems far more onerous (and important) for wrestling than it does for, say, football, another sport with rotating (and imbalanced) schedules. Wrestling depends on marquee dual meets to drive attendance during the season. A visit from Iowa or Penn State means a lot more to a program than, say, a visit from Indiana or Purdue. Even at Iowa, attendance is noticeably impacted by marquee opponents -- Iowa-Penn State last year was a sellout (or near enough), but Iowa-Michigan State, uh, won't be. (It will be lucky to draw more than half that number, probably.)

But let's take a look at the schedule in slightly greater detail:

There's still an air of mystery to Iowa's 2013-14 schedule, thanks to the unannounced tournament they're participating in to get the season underway. Depending on the other teams involved, that could be a very nice challenge for Iowa, which is sorely needed, given the state of the rest of the schedule. We'll just have to wait and see how who Iowa will be facing at that mystery event.

As noted before, the Iowa City Duals return, the same day as Iowa's Black Friday football game against Nebraska and the Iowa basketball team's second game in the Battle 4 Atlantis tournament. That's going to be a very busy day around BHGP. As noted before, a few fun interwebs rumors had UNI and Wartburg (a perennial wrestling power at the DIII level) being a part of this year's Iowa City Duals, but it seems that those rumors were false. Instead, Iowa will face Baker University, Cornell College, and Iowa Central Community College, which means several lopsided team scores for Iowa and not much in the way of high-quality competition.

Iowa gets December underway with a visit to Ames for the annual clash with Iowa State, then has a pair of dual meets against Edinboro and Buffalo. Last year, Iowa won both duals handily, beating Edinboro 31-6 and Buffalo 39-3. Buffalo returns no wrestlers of note, while Edinboro has some very solid wrestlers in the 133-141-149 range. AJ Schopp and Mitchell Port were All-Americans last year at 133 and 141, respectively, while Habat should be a fringe top-10 opponent at 149. Iowa also beat Iowa State a year ago, 32-3. Iowa State returns All-Americans at 165 (Mike Moreno) and 197 (Kyven Gadson), but for the most part appears to again be rather overmatched by Iowa.

The best news out of December is that Iowa will be returning to the Midlands Championships in Evanston, IL. Iowa skipped last year's event, in part to train for the Ohio State dual meet in early January, but they're returning to a tournament that's been a frequent stop for them over the past few decades. Their return to Midlands is especially great news considering the weakness of their dual meet schedule. The full field for Midlands hasn't been released yet, but teams like Missouri, Oklahoma, Central Michigan, Iowa State, UNI, Michigan, and Illinois have been frequent participants in recent years, so it's safe to assume some (and hopefully all) of them will be at this year's event. With no Iowa presence at events like Grapple at the Garden or the NWCA National Duals this year, Midlands may be the only event where Iowa sees many of these teams until the NCAA Tournament (or the Big Ten Tournament, in the case of Illinois).

January contains the bulk of Iowa's dual meet schedule, as well as the two best meets on the schedule (home or away): Oklahoma State and Minnesota. Iowa lost to Oklahoma State a year ago, 18-12, and split with Minnesota (a 16-15 win in the regular season and a 22-15 loss at National Duals) and both teams should again be very good in 2013-14. Oklahoma State loses two-time national champion Jordan Oliver and all-American Alan Gelogaev, but they return national champion Chris Perry and all-Americans Jon Morrison, Alex Dieringer, and Tyler Caldwell. Minnesota returns even more talent, including two-time national champion Tony Nelson and all-Americans Chris and Nick Dardanes, Dylan Ness, David Thorn, Scott Schiller, Logan Storley, and Kevin Steinhaus. Both of those duals should be very closely contested and very tense affairs.

The rest of the January slate is much less exciting. Last year Iowa beat Purdue 29-9 and handled Nebraska, 31-7. Purdue returns no one of note this year and Iowa could very easily improve on that margin of victory this year. Nebraska is a bit more intriguing, since they return all-Americans James Green and Robert Kokesh and add a very highly touted newcomer in Destin McCauley (likely at 149). They probably still don't have the team-wide depth to beat Iowa in a dual, but they might be able to make things interesting and a few matches should definitely be very competitive. Iowa beat Michigan State, 27-12, a year ago in a meet that was only that "close" because Iowa forfeited at 285 (Telford was ill); their only notable returning wrestler is Mike McClure at heavyweight.

Iowa didn't face the other two opponents on their January slate (Indiana, Northwestern) last season. Neither Indiana nor Michigan State return a great deal in 2013-14 (although both do have solid heavyweights), so Iowa should handle them easily. Northwestern is slightly more intriguing; they return national runner-up Mike McMullan and bring in highly regarded redshirt freshman Jason Tsirtsis (brother of former Iowa wrestler, Alex Tsirtsis).

Iowa closes out the Big Ten season with duals against Michigan and Wisconsin sandwiched around a trip to Lehigh. Lehigh returns a handful of solid wrestlers likely to be ranked in top 20 at their respective weights, but no real studs other than perhaps Joey Napoli. Michigan is a team on the rise, but they may still be a year or two away from being a legitimate threat in the Big Ten. Iowa beat Michigan last year, 33-10. Other than Taylor Massa at 165, it's not clear that they'll have any other wrestlers in the top 10 of their respective weights. Wisconsin brings back Tyler Graff, an all-American who figures to be Tony Ramos' toughest competition at 133 this year (Ohio State's Logan Stieber, a two-time national champion at 133, is moving up to 141 this year) and Connor Medberry, a fringe top-10 heavyweight, and welcomes a pair of touted redshirt freshmen to their lineup in Jesse Thielke and Isaac Jordan. Iowa did not face Wisconsin a year ago.

As always, the season concludes with the Big Ten Tournament (which is in Madison, WI this year) and, nearly two weeks later, the NCAA Tournament (in Oklahoma City, OK this year). One possible silver lining of Iowa's fairly unimpressive schedule this year is the potential for Iowa wrestlers to rack up some gaudy records prior to the Big Ten and NCAA Tournaments. Those records won't mean much if they aren't able to back them up with strong performances at those tournaments, of course, but it's conceivable that the records could tip things in their favor a few times during the seeding process for those events, perhaps giving Iowa wrestlers slightly easier paths in their respective brackets. But that's putting the cart pretty far in front of the horse at this point; the schedule may not appear to offer a lot of great competition on paper, but Iowa will still need to go out and wrestle (and win) the matches in reality.