We Must Break You: 2013 NCAA Tournament Qualifier Allocations Announced

Allocations, at-larges, and RPIs, oh my!

Share All sharing options for: We Must Break You: 2013 NCAA Tournament Qualifier Allocations Announced

The NCAA announced the qualifier allocations for each conference for the NCAA Tournament later this month today. What's that mean? Well, I'll let them explain:

Each qualifying tournament was awarded spots per weight class based on current year data. Each wrestler was measured on the following: Division I winning percentage at the weight class; rating percentage index (RPI); and coaches’ ranking.

After all of the qualifying events have concluded, the NCAA Division I Wrestling Committee will meet in person to select the remaining 40 at-large qualifiers, which will be announced on March 13. All weight classes will consist of 33 wrestlers. The at-large selections will be made based on the following criteria: head-to-head competition; qualifying event placement; quality wins; results against common opponents; winning percentage; RPI; coaches’ ranking and the number of matches contested at that weight class.

And here's the actual breakdown of the qualifiers at each weight by conference:

Let's take a quick look at how things look for Iowa, weight-by-weight:

125: 7 automatic qualifying slots -- McDonough should have no trouble claiming one of these.

133: 7 automatic qualifying slots -- again, Ramos should also have no trouble claiming one of these.

141: 6 automatic qualifying slots -- Ballweg needs to snap out of his recent funk, but it would still be a surprise to see him finish lower than 6th at the Big Ten Tournament. He would certainly get an at-large bid anyway, though.

149: 8 automatic qualifying slots -- this would be a no-brainer qualification for Iowa if we had even an average option at this weight; alas, our struggles at 149 are well-documented at this point. The Big Ten got a whopping 10 (!) automatic qualifying slots last year and Mike Kelly still wasn't able to secure one of them. To even finish 8th, Kelly (or Grothus) will need to win at least one match at the BTT, perhaps two. Considering that neither Kelly nor Grothus won a single match against a B1G opponent in a dual meet this year, well... I don't have a lot of faith in that. Interestingly, there's been some scuttlebutt of Josh Dziewa bumping up from 141 to take a crack at this weight. That would be a little crazy, but hell -- it's not as though the more "conventional" options at this weight have done anything to lock down a starting job.

157: 7 automatic qualifying slots -- St. John should have no trouble claiming one of them.

165: 8 automatic qualifying slots -- Nick Moore has had his ups and downs as a starter this year, but he should still finish comfortably within the top-8 at the BTT.

174: 8 automatic qualifying slots -- again, The 'Stache should have no trouble getting one of these spots.

Could Lofthouse finish in the top-6 of the Big Ten Tournament? It seems likely on paper -- he's the 4th highest ranked B1G wrestler at 184 and he did go 4-2 in B1G dual meets this year. There's a popular line of thought that Lofthouse would be the safer pick at the weight (and more likely to qualify the weight for the NCAA Tournament for Iowa), but that Gambrall would offer more potential upside. That seems to be based fairly heavily on the fact that Gambrall had a torrid run at the NCAA Tournament two years ago, finishing 3rd; unfortunately, based on his results since that feat, it seems much harder to believe that he would be that much better (if at all) than Lofthouse at this weight.

197: 8 automatic qualifying slots -- Going into the season, this is probably the weight that I felt the least confident about qualifying for the NCAA Tournament, given the struggles at 197 a year ago and the fact that there was a decent chance that Iowa would be starting a true freshman at this weight (albeit a "true" freshman a year removed from high school and with a year at the Olympic Training Center under his belt). (Mind you, this was also when we thought that we had hit rock bottom at 149 and that it couldn't help but be better in 2012-13... oops.) But Burak has quietly had a pretty solid season -- did you know he went 4-4 in Big Ten duals this season? Granted, he's also lost to some less-than-impressive opponents, so I wouldn't write his name into the NCAA Tournament field in ink or anything... but I do think a top-8 finish at the BTT is within his means.

285: 9 automatic qualifying slots -- Bobby should have no trouble getting one of these spots.

* Meanwhile, the Big XII is down to a measly 19 automatic qualifying slots. Of course, that's what happens when your entire conference consists of one very good team (Oklahoma State), one solid team (Oklahoma), and two bad teams (Iowa State, West Virginia). Still, the Big XII has the same number of automatic qualifying slots as the Colonial Athletic Association -- that's just sad.

* In case you were wondering: Missouri and UNI will be competing in the MAC Tournament and trying to claim some of that league's 30 automatic qualifying slots. 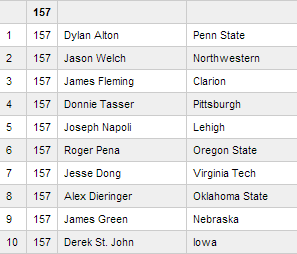 So yeah: the wrestling RPI is just a little bit flawed.