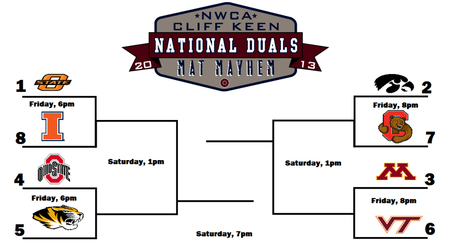 Hooray for brackets! The National Wrestling Coaches Association (NWCA) finalized the bracket for the 2013 National Duals Tournament (aka, "Mat Mayhem") on Tuesday, with Iowa being seeded 2nd (behind top-seeded Oklahoma State) and paired against 7th-seeded Cornell in the quarterfinal round, set for Friday evening. The final pairings on the bracket were a slight surprise, since they didn't precisely match the most recent rankings from the NWCA/USA Today Coaches Poll. The latest rankings from that poll (released today) have the following teams in the top-ten:

Mind you, I'm glad that they did -- on paper, it looked like Iowa was in line for three regular-season rematches if they make it to the finals of the event (Illinois in the quarters, Minnesota in the semis, and Okie State in the finals). We just saw Iowa wrestle Illinois less than three weeks ago, so I'm perfectly happy to see Iowa instead face a fresh opponent.

Iowa has a 2-1 all-time record against Cornell and last faced them in 2008-09 in, coincidentally enough, the National Duals. It was the finals rather than the quarterfinals that year, though, and Iowa won 23-13 to secure one of their six all-time National Duals titles. This year's Cornell team has some very good talent (most notably, #1 Kyle Dake at 165, a 3x NCAA Champion, and #4 Steve Bosak at 184, the defending NCAA Champion), but they're not quite as good as the Cornell teams of the past few seasons and they don't appear to have enough quite enough horses to beat this Iowa team, unless they can get a few upsets. I'll preview more thoroughly later in the week, though.

On the whole, there will be an impressive collection of talent on display at the National Duals this weekend. The quarterfinalists comprise eight of the top ten teams in the NWCA's most recent rankings; the only absentees are #9 Oregon State (who fell to Virginia Tech in a regional last weekend) and #3 Penn State, who can't be bothered to participate in this event because Cael and his charges are off spreading the gospel of college wrestling to the poor, huddled masses at... Rutgers. So it goes.

But even without Penn State in attendance, there are a lot of very good wrestlers converging on the Twin Cities this weekend. Per the release from the UI:

DUALS TOURNAMENT IS A STACKED DECKSixty-two wrestlers from the eight participating schools are rated in this week's Intermat rankings, including seven of the nation's top-rated wrestlers. Of the 10 weight classes, 125, 133, 165 and 184 feature seven ranked competitors. Matt McDonough's 125-pound weight class features five of the nation's top six wrestlers. Tony Ramos' 133 pound weight class features six wrestlers ranked in the top 10, while the 165 and 285 pound weight classes feature the top three wrestlers in the country at their respective weights. Mike Evans is ranked No. 3 at 165 pounds. Should Iowa meet Oklahoma State or Minnesota this weekend, Evans will have an opportunity to avenge his only two losses of the season. Bobby Telford is 15-3 this season, with each loss coming to a wrester in the tournament field (No. 2 Tony Nelson, No. 3 Alan Gelogaev, No. 13 Peter Capone).

If Iowa gets past Cornell on Friday night, their most likely opponents on Saturday are Minnesota (in the semifinals) and Oklahoma State (in the finals). Between those duals, there are several potentially intriguing matches for Iowa wrestlers.

149: Whoever goes for Iowa at this weight could see three ranked opponents this weekend: #14 Chris Villalonga on Saturday and #6 Dylan Ness (Minnesota) and #1 Jordan Oliver (Oklahoma State) on Saturday.

165: It could be a very un-fun weekend for Nick Moore; he'll face #1 Kyle Dake on Friday and could see #14 Cody Yohn (Minnesota) and #3 Tyler Caldwell (Oklahoma State) on Saturday.

174: Mike Evans could avenge his only two losses this season on Saturday, against #1 Logan Storley (Minnesota) and #2 Chris Perry (Oklahoma State).

184: Whoever wrestles for Iowa at this weight is likely to see three wrestlers in the top-11 at this weight: #4 Steve Bosak on Friday and #5 Kevin Steinhaus (Minnesota) and #11 Chris Chionuma (Oklahoma State). Iowa could really use some surprise results out of this weight this weekend.

285: Bobby Telford could have an opportunity to finally beat two his longtime nemeses this weekend, too: #2 Tony Nelson (Minnesota) and #3 Alan Gelogaev (Oklahoma State).

If either Minnesota or Oklahoma State were to get upset, Iowa could see a variety of other opponents, including Missouri, Ohio State, or Virginia Tech, all of whom would provide some intriguing match-ups for Iowa. I'll take a look at the other quarterfinal match-ups -- and the likely semifinal match-ups -- later this week.