We Must Break You: Edinboro

Breaking down Iowa vs. Edinboro.

Share All sharing options for: We Must Break You: Edinboro

A week after clinching the Big Ten dual meet championship, Iowa gets back to action this weekend against... Edinboro? Yes, Edinboro. While it seems odd to be playing a team like Edinboro at this time of the season, it makes more sense when you look at the schedule. Big Ten action finished last week and the NWCA National Duals are kicking off this weekend. Iowa is one of four teams with a bye into the quarterfinals (the other three are Minnesota, Ohio State, and Illinois) next weekend in Minneapolis.

Rather than just train for two weeks straight, Brands & Co. opted to break up the monotony of training by scheduling a dual with a decent team to (hopefully) help keep Iowa sharp as the really big events of the season get nearer and nearer. It's a home-and-home series, so next year Iowa will head out to Edinboro, PA to return the favor. The timing here isn't totally ideal, at least if you're an in-state wrestling fan -- the finals of the Iowa State Wrestling Tournament are on Saturday night. So it goes, I guess.

So who is Edinboro? It's a small liberal public arts college in Pennsylvania. All of their sports but wrestling compete at the Division II level; wrestling competes at the Division I level and is a joint member of the Pennsylvania State Athletic Conference and the Eastern Wrestling League (EWL). The EWL is also home to Bloomsburg, Clarion, Cleveland State, Lock Haven, and Pitt. (FUN FACT: Penn State wrestling was in the EWL until they joined the Big Ten in 1993.) Edinboro has been the big kahuna in the EWL of late, though -- they've won (or shared) 12 of the last 15 conference tournament championships, as well as 9 of the last 15 conference dual meet championships. This year they're 3-1 in the league, lagging behind mighty Bloomsburg.

More importantly, Edinboro are the Fighting Scots! As you might expect, they have a pretty bitchin' logo:

In fact, Edinbro likes that logo so much they plaster it across their wrestlers' singlets:

Iowa is 5-0 against Edinboro in wrestling. They last met in 2001, when Iowa beat them 35-14. As best I can tell, wrestling is also the only sport where Iowa has ever faced Edinboro (this is not a huge shock, given that Edinboro is DII in everything else, but still -- Iowa played some weird teams back in the day in football and basketball, but never Edinboro, it would seem).

It's also worth noting that Saturday's dual is Senior Day for four Iowa wrestlers: Matt McDonough (125), Mark Ballweg (141), Jeret Chiri (149(, and Grant Gambrall (184). They've all started for Iowa at one time or another (Chiri had a brief run as Iowa's starter at 149 back in 2010-11), and while they've experienced wildly different levels of success at Iowa, all four have been dedicated teammates and excellent representatives of the program, the university, and the state of Iowa. A sincere thanks to all of them for their contributions to Iowa wrestling over the last 4-5 years.

As far as the dual itself, it looks a bit reminiscent of the Nebraska dual: a few weights where Edinboro has a very good wrestler, but otherwise quite a few guys who figure to be in over their heads against their Iowa counterparts. This is another dual where Iowa could get quite a few bonus points. But there are also a few very good tests for Iowa wrestlers and matches that may prove crucial to seeding come NCAA Tournament time.

125: McDonough might not be quite right, but he should be more than right enough to dispatch Mines. Most of Mines' losses have been via decision, but he also hasn't faced many wrestlers as good as McD this season. I think McDonough will be motivated to end his CHA career with a bang on Saturday night, too.
McD via FALL (IOWA 6-0)

133: And here we have the main event of the evening, with the #2-ranked wrestler at 133 taking on the #3-ranked wrestler at that weight. Ramos has put together an outstanding season: 19-0, leading the team in falls (9), leading the team in dual points scored (94). The one knock on his resume has been a lack of competition against the top-end guys at his weight, though. Ramos has faced only three ranked opponents this year (by comparison, McDonough has faced nine ranked opponents at 125). He's 3-0 against them (including a pin over #10 Daryl Thomas last week), but still: there haven't been many opportunities this season to see how Tony stacks up against the best of the best at this weight. That isn't Tony's fault, of course -- he can't control Logan Stieber or Cashe Quiroga getting injured shortly before they were scheduled to face Ramos, nor can he control the fact that 133 just isn't one of the Big Ten's best weights this year -- but it is a reality.

Fortunately, Tony gets a chance to showcase his abilities against a very good opponent in this dual, #3 A.J. Schopp. Schopp has a 25-2 record, which includes 16 falls. Then again, Schopp hasn't faced the toughest schedule, either -- he's only faced three wrestlers currently ranked in InterMat's top 20 -- the aforementioned Thomas (he pinned him, too) and Virginia Tech's Erik Spjut (twice). So this match figures to be a great test for both guys. While Schopp is good, it's impossible to pick against Tony right now (at least against anyone not named Logan Stieber), especially at home. I think Ramos rides the CHA energy to a solid win.
Ramos via DEC (IOWA 9-0)

141: This is the second-best match of the night, with #5 Mitchell Port taking on #8 Mark Ballweg. Port is 25-3, with 10 of his wins coming via bonus points. He has no bad losses, either: he's lost to #2 Hunter Stieber (12-7), #1 Kendric Maple (14-11), and #4 Michael Mangrum (7-5). A win would be huge for Ballweg, since it might push him up the rankings (and, more importantly, the seedings) and away from potential quarterfinal match-ups with the likes of Maple or Stieber. It hasn't always been pretty with Ballweg this year (although 12 of his 18 wins have included bonus points, so he's done a nice job), but he's usually gotten the job done and he's had some solid wins along the way. This smells like a coin-flip match to me... but I'll go Ballweg.
Ballweg via DEC (IOWA 12-0)

149: I don't care who goes for Iowa here, I wouldn't pick the Hawkeyes to win a match at 149 if they were going against a practice dummy at this point.
Habat via DEC (IOWA 12-3)

157: DSJ doesn't always get bonus points (10 of 19 wins this year), but a match against a wrestler with a losing record seems like a good chance for him to do so.
DSJ via MAJ DEC (IOWA 16-3)

165: Greisheimer has a great name, but an unimpressive record. Moore still has issues against top guys at this weight, but he's been increasingly good at hammering the lesser lights here.
Moore via MAJ DEC (IOWA 20-3)

174: Meanwhile, after weeks and weeks of facing ranked opponent after ranked opponent (Evans has faced seven ranked opponents this year, going 5-2), The 'Stache gets a respite with his match against Jennings. Evans has been cranking guys on the mat lately and looking hard for a pin... I think he finds that pin in this match.
Evans via FALL (IOWA 26-3)

184: Lofthouse or Gambrall? Braces or dental plan? Tastes great or less filling? Truly, these are some of the iconic debates of our time. Will Gambrall is 0-2 over the last few weeks, but he's also drawn tougher opponents than Lofthouse (#1 Ed Ruth, #8 Josh Ihnen) and it is Senior Day, his last chance to wrestle in CHA. Lofthouse looked like he had taken Brands' message to heart a bit in his win over #20 Tony Dallago last week, pushing the pace and looking for his offense more than he had in weeks. Pickett has had an up and down season as a true freshman starter: he's 19-12 with 10 wins via bonus point, but he's had several losses via bonus, too. I think this match will be closer than we'd like, but Ethen (or Grant) will get the win.
Lofthouse via DEC (IOWA 29-3)

197: Bosch has struggled as a RS freshman starter; this could be an opportunity for Burak to get a little confidence and work on improving his offense.
Burak via DEC (IOWA 32-3)

285: James is no scrub, so it's unlikely that Telford will just have his way with him. Still, Telford is wrestling very well lately and it's hard to pick against him here.
Telford via DEC (IOWA 35-3)

This looks like an Iowa rout on paper and it should end up being a solid victory in reality as well, but Edinboro has good chances to get victories at 133, 141, and 149 and they could pull upsets if we're napping at 184, 197, and 285. Iowa will need to be sharp to dominate this dual.

Meanwhile, can we talk about what's going on in Edinboro next weekend? 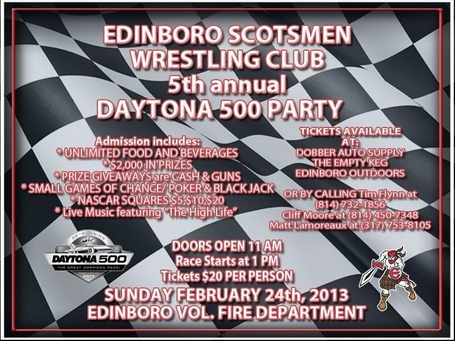 There's so much to digest here.

* "Unlimited food and beverages"? I hope they're prepared for some hearty appetites...
* "$2000 in prizes"? That's quite generous.
* "Prize giveaways are CASH & GUNS"? Wait, what? They're giving away guns?! This, um, seems like a poor idea.
* "Small games of chance" (i.e., pull-tabs and raffles OK, Night at the Races and sports betting NOT OK)
* "Live music featuring 'The High Life,'" which might be these guys; on the other hand, this group seems a little livelier, but they might not fit the NASCAR mood as well)
* Finally, who names their bar "The Empty Keg"? What kind of message is that sending? A bad one, if you ask me.