We Must Break You: Iowa vs. Nebraska Preview and Game Thread

Share All sharing options for: We Must Break You: Iowa vs. Nebraska Preview and Game Thread 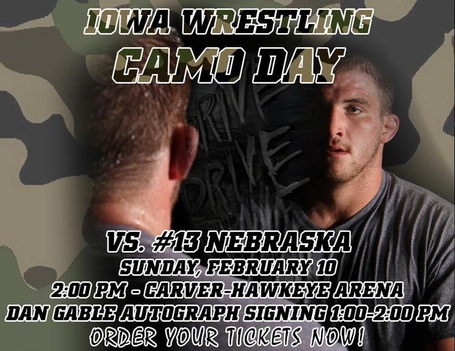 Time for another quick preview

125: Yes, McDonough hasn't looked like himself this year -- not even close. But he's facing a guy who's way out of his depth at the moment. He's a true freshman who's gone 2-12 this year. I think McD gets a pin here.
IOWA 6-0

141: Ballweg struggled against a freshman on Friday night, but I think he bounce back at home.
IOWA 16-0

149: Will Grothus get the nod here again? Will Kelly be called back from limbo? Will it matter? I don't think so.
IOWA 16-3

157: This is one of the two centerpiece matches of the dual, with DSJ taking on a top-ten opponent in James Green. This match worries me a little because Green is the sort of wrestler that gives DSJ trouble: he's powerful, explosive, and very quick. But he also doesn't have a great gas tank, so I think DSJ will manage to wear him down.
IOWA 19-3

165: Wilson is a redshirt freshman having a pretty solid season, but this should be a good match for Moore to bounce back from his recent losses.
IOWA 22-3

174: And this would be the other centerpiece match of the dual. Another dual, another match against a top-10 opponent for Mike Evans. His schedule has been absolutely ridiculous this year. Evans knocked off #8 Jordan Blanton on Friday night in a gritty 2-0 performance and now he gets an old foe, Nebraska's Robert Kokesh. This is an intriguing match because Kokesh has looked excellent since bumping up to 174 from 165. Of course, Evans hasn't looked too bad himself since making that move and he beat Kokesh handily last year (7-3, 17-2). Will that superiority carry over to the new weight? I don't think he'll dominate Kokesh, but I still like him to get the win.
IOWA 25-3

184: This is the other notable match of the dual, with Ethen Lofthouse or Grant Gambrall taking on #8 Josh Ihnen. Lofthouse got the nod on Friday night and put forth a nice effort -- will he get another crack today? Will Gambrall get another chance? I have a hunch Lofthouse will get the nod after looking pretty good on Friday, but I don't have a lot of confidence in him getting the win over Ihnen.
IOWA 25-6

197: Burak has been close to several wins late, but he's come up short in those matches; I think he gets back on the winning side of things against a wrestler with a losing record.
IOWA 28-6

285: Can Bobby make it two pins in a row? That would be impressive and a comfortable, but I'll just settle for a comfortable win.
IOWA 31-6

Nebraska has a decent chance to get wins at four weights (149, 157, 174, 184), but a win in the dual will be very difficult. One, they'll have a hard time getting wins in the other matches. Two, Iowa has a very good chance to get bonus points in those other matches. So this should be a pretty comfortable Iowa win.