How are things going at Midlands?

How's Iowa doing in the 2013 Midlands Championships?  Oh, just nine semifinalists, a 29-1 record among designated point scorers, and a commanding lead in the team title race.  Not too shabby.  Read on for more details. 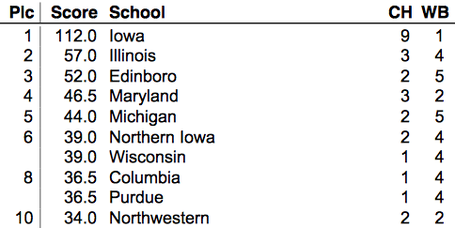 Iowas has 9 of their 10 point-scorers alive in the championship bracket; Brooks' loss in the quarterfinals (to 2-seed Sheptock) is the only loss by an Iowa point-scorer so far.  Iowa's point scorers here are Clark and Gilman at 125, Ramos at 133, Dziewa at 141, St. John at 157, Moore at 165, Evans at 174, Lofthouse and Brooks at 184, and Telford at 285.  (Remember that Burak is technically wrestling unattached here and not as an official Iowa wrestler in order to preserve the possibility of him taking a redshirt this year.)

So far, Iowa wrestlers have mainly just wrestled to seed here, beating wrestlers that they would be expected to beat.  Of course, there's one very notable exception to that statement: Josh Dziewa's impressive 6-1 win over Franklin & Marshall's Richard Durso, the 2-seed here.  Durso was the 5th-ranked wrestler in the country at 141 (per InterMat) and a near-All American last year (he lost in the round of 12 at the NCAA Tournament) and he's easily the best win Dziewa has been able to notch in an Iowa singlet.  Nicely done, Dziewa.

Also of note?  Tony Ramos' quarterfinal win was the 100th of his Iowa career, which is a great feather in his cap.  He's the 34th Iowa wrestler to accomplish that feat.  We'll try to discuss it in greater detail after Midlands.

Grothus and Sorensen keep chugging along as Iowa's representatives at 149 in the consolation bracket.  It's a little awkward that they're still alive while the presumptive starter at that weight (Kelly) is done wrestling here.  If Grothus or Sorensen can record a few more good wins and finish near the top of the heap in the consolation bracket, Brands' decision at 149 may get a bit thornier...

After wrestling mostly to seed so far, the semifinal round is when the going figures to get a bit tougher for Iowa guys, particularly at 125, where Clark and Gilman have daunting challenges in the form of Garnett (an All-America last year) and Delgado (the defending NCAA champion at 125).  Ramos has an interesting challenge in Waters, an All-America at 125 a year ago who's tough to score on and is very strong on top.  St. John gets promising Wisconsin freshman Isaac Jordan in his semi, while Nick Moore has a very tough match with Taylor Massa (a potential stud at 165).  Burak has a tricky semifinal against Boley as well, while Telford gets a chance to avenge his "loss" to Felix in last year's NCAA Tournament (he injury defaulted to Felix after sustaining a knee injury in his previous match).  I don't expect Iowa to put all 10 wrestlers in the finals (although that would be fantastic), but I'll be disappointed if they don't at least place 6 or 7 in the finals.

As you can see, things get much tougher for our surviving 149ers today; if they can beat Habat or Neibert, that would be very impressive.

This post will also serve as your open thread for Session III.