Iowa Dominates the Competition at the Iowa City Duals

Share All sharing options for: Iowa Dominates the Competition at the Iowa City Duals

A week after crushing the field at the Luther Open, Iowa returned home to Iowa City to kick off the dual meet portion of their schedule with the Iowa City Duals, welcoming Baker College (from Kansas), Iowa Central Community College, and Cornell College (from Iowa) for a series of rapid-fire back-to-back-to-back dual meets.  The outcome was never in doubt; Iowa hasn't lost a dual meet at the Iowa City Duals since the event began several years ago and if they continue scheduling teams like this, that undefeated record is unlikely to change.  In the college football world, Alabama and Florida State are taking on the likes of Chattanooga and Idaho tomorrow in two preposterously lopsided games; the wrestling equivalent of those games took place in Carver-Hawkeye Arena on Friday morning and afternoon.

Iowa won 29 of 30 matches, with the lone loss by an Iowa wrestler coming against the toughest opponent that suited up on any of the non-Iowa teams, Cornell's Alex Coolidge, the #1 ranked wrestler at 197 lbs. in Division III.  Of course, it didn't hurt that he also got to face Kris Klapprodt, typically a 174 or 184 lb. guy,  who was filling in for projected starter Nathan Burak at 197.  Klapprodt held his own in the match, but he didn't go to his own offense enough (a fact also lamented by Iowa broadcaster Mark Ironside during the match) and ultimately his failure to secure a takedown when he was achingly close to doing so at the end of the second period proved costly.

Again, Iowa winning 29 of 30 matches yesterday wasn't much of a surprise -- it was the expectation, given the competition.  There are good wrestlers on Cornell, Baker, and Iowa Central, but ultimately there's still a pretty significant difference between being a Division III wrestler and being a Division I wrestler, especially a very good Division I wrestler -- and Iowa just so happens to have quite a few very good DI wrestlers on their team this year. 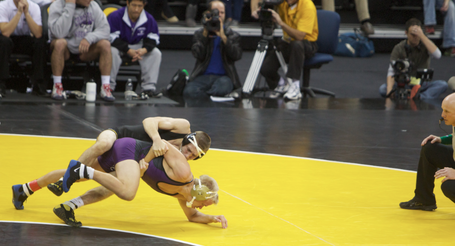 While the wins themselves were hardly unexpected, the manner those wins arrived in raised a few eyebrows: 24 of the 29 wins came via pinfall, a week after Iowa notched 40 pins in the elite (aka, varsity) division at the Luther Open.  Obviously, expectations need to be tempered since those pins came against DIII competition and Iowa doesn't get to wrestle any more DIII opponents this year, but it was immensely gratifying to see Iowa wrestlers looking for pins so much -- and, more importantly, getting them so skillfully and so quickly in many of their matches.  (By my count, 18 of the pins came in the first period.)  That aggressive, attacking attitude will continue to serve them well this season, even as the competition ramps up.

For the record, Iowa won their duals at the Iowa City Duals a year ago by the scores of 49-0, 49-3, and 45-6.  They improved on those victory margins this year, but as always it's difficult to know how much of that is a result of improvement on the part of the Iowa wrestlers and how much is the result of lesser ability on the part of these opponents versus the 2012 opponents.  The correct answer is probably a little from column A and a little from column B.  Regardless, all told Iowa scored bonus points in 27 of 29 wins (the two decision wins came via Terrance Jean-Jacques, iowa's back-up heavyweight) and posted an aggregate score of 164-3.  Not too shabby.

Derek St. John took home the (non-existent) prize for quickest pin of the day, recording a fall in just 53 seconds, which just nipped Tony Ramos' previous high water mark (55 seconds).  DSJ also spent the least amount of time on the mat of all the guys who wrestled all three matches:

To be fair, Ramos may well have placed higher if he hadn't spent a good portion of his third match just tinkering with different moves and different means of securing a pin.  It's heartening to see Clark and Dziewa mowing through opponents and constantly looking for pins and bonus points.  Iowa's ability to mount a challenge against Penn State depends hugely on wrestlers like those two to step up and become serious point-scoring threats.  Performances like this are a good start.  (Along those same lines, I was also happy to see Nick Moore pick up two quick pins and look dominant -- his ability to make a leap into genuine All-America threat and bonus point scorer would help Iowa immensely.  Caveats about the competition here apply, naturally.)

Meanwhile, Mike Evans will no doubt get some shit from his teammates for his performances; he was the only Iowa wrestler to not record a pin against Baker, being forced to settle for "just" an 18-3 technical fall.  (The horror!)  In fact, Evans recorded just one pin on the day, in his second match against Iowa Central's Meehan.  Tech falls are a pretty decent consolation prize for not getting a fall, though.  I think we all know why Evans doesn't seem to have all of his mojo at this point in the season, though: BRING BACK THE 'STACHE, MIKE.  THE 'STACHE HAS POWERS.

Terrance Jean-Jacques wrestled all three matches for Bobby Telford at heavyweight yesterday; the scuttlebutt is that Telford tweaked his knee and will be out of action for a few weeks.  So long as he's back for Big Ten competition and the tournaments that loom at the end of the season, things should be fine, although it's a shame he won't be able to continue that red-shot streak of pins he had at the Luther Open.  TJJ had some struggles, but his presence is welcome just for the fact that it means has another credible heavyweight on the roster and that they don't need to forfeit matches at 285 if Telford is unable to go (which was the case a few times last year).  On the bright side, though, TJJ did pull of a really nice blast double leg takedown in the Cornell meet:

Beyond that, I'm not sure how much more there is to say about these duals.  Iowa was absolutely dominant in them... but that was absolutely to be expected, given that you had one of the best teams in Division I playing teams from Division III (and the JUCO ranks).  Perhaps the best takeaway is just the aggression on display and the willingness to seek out (and secure) pins.  Bonus points have been a bugaboo for Iowa over the past few years and one of the key reasons they've fallen behind Penn State in the Big Ten and NCAA title races.  Certainly we need to see if Iowa is able to score bonus points against the sort of wrestlers they'll see in the Big Ten and NCAA Tournaments, but at the very least the mindset that was on display on Friday was heartening.  Iowa wrestlers wanted pins and they wanted pins by the bushel -- and they got 'em.

Incidentally, several Iowa wrestlers are participating in the Joe Parisi Open at Lindenwood University this weekend.  The Iowa contingent there doesn't include any of the wrestlers who competed yesterday, but does include a host of back-ups and freshmen.  Wrestlers from Oklahoma State, Illinois, Missouri, and Oklahoma will be there (although I'm not sure if their starters will be there or their backups).

The Iowa participants are:

We'll update their results at this event later.

(Once again, big thanks to Tony for his excellent live results and updates yesterday during the duals.  And thank you to The Daily Iowan for generously sharing some of their event photos with us.  Give them a visit, won't you?)