The college wrestling season essentially gets underway tonight, with the NWCA All-Star Classic getting things underway this evening outside Washington, D.C. This thread can also serve as your open thread for the event.

This sucks DSJ has withdrawn from tonights All-Star Classic due to an illness. #Hawkeyes

St. John will be replaced by Lehigh's Joey Napoli in the 157 lb. match.

There was a mini-controversy about how the event would conclude, as the NWCA hosted a poll on their website, asking fans to vote on which match would be the main event and conclude the show. Not surprisingly, Iowa fans turned out well in the poll: 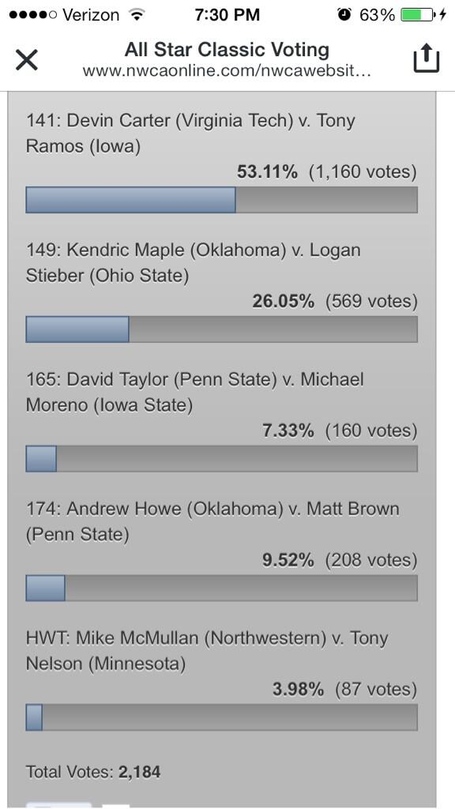 But apparently the NWCA opted to go with Stieber-Maple as the main event anyway, fan vote be damned. The voice of the people will... not be heard.

To the best of my knowledge, they've never faced one another before. Patterson and Garrett are both 1-time All-Americans (Patterson in 2011, Garrett last year). Garrett looked excellent at the end of last season and is one of my picks to challenge for the national title at this weight this year.
PICK: Garrett DEC Patterson

Schopp and Beckman have also never faced one another, apparently. Schopp finished 4th at the NCAAs last year. Beckman was a top recruit a few years ago. Beckman might be very good someday soon, but Schopp is pretty damn good right now.
PICK: Schopp DEC Beckman

Carter and Ramos have never met at 141, but they wrestled each other three times at 133 two years ago. Carter took the first encounter, a 6-4 SV win at Midlands. Ramos won the rematch, 3-2, at National Duals, and also won the rubber match, 8-3, at the NCAA Tournament. Carter looked solid at 141 during his redshirt year last year and he has the size and skill to give Ramos trouble. But I'm not going to start the year by picking against Tony.
PICK: Ramos DEC Carter

Voting angst aside, this might very well be the match of the event, since it pits two defending NCAA champions against one another. This could have been a preview of the NCAA final at 141, if not for Maple's move up to 149 this year. Both Maple and Stieber have phenomenal defense, so this could certainly be a low-scoring bout. Maple's length may give Stieber a few issues, but Stieber is tough to bet against.
PICK: Stieber DEC Maple

There's no past experience between Napoli and Taffur. Taffur had 9 losses last year, but most of them were to solid, NCAA-qualifying (or All-American) opposition. Napoli had a shocking performance at the NCAA Tournament, going 0-2 and ending his stay on Thursday night. Napoli was ranked fairly highly throughout most of last season, but this feels like a toss-up to me. Coin flip says Taffur.
PICK: Taffur DEC Napoli

Michael Moreno made a shocking run to the podium at last year's NCAA Tournament, but David Taylor is David Taylor. This will be a rout.
PICK: Taylor FALL Moreno

Howe's a three-time All-American and he's never finished lower than 3rd at the NCAA Tournament. Brown came off his Mormon mission and redshirt season to finish as the NCAA runner-up last year. Suffice to say, there's a very good chance that these guys could see each other again in March. Brown is very good, but Howe is excellent.
PICK: Howe DEC Brown

Sheptock beat Swartz, 3-2, at last year's NCAA Tournament on his way to a 6th place finish. Sheptock has a pretty good case to make as the best 184er not in the Big Ten... although Swartz is one of the primary challengers to that title, too. This should be a very closely fought match. Let's give Sheptock the home mat-ish advantage.
PICK: Sheptock DEC Swartz

Meeks and Schiller wrestled twice last year and Meeks won both bouts, 8-2 the first time and 11-3 the second time. Schiller is good, but those results don't suggest that he's too close to Meeks yet, even if he's improved a lot over the off-season.
PICK: Meeks DEC Schiller

This is a rematch of last year's Big Ten Tournament final AND last year's NCAA Tournament final. Nelson won both of those matches, 4-1 and 6-2. Nelson also won both of their matches the year before, 4-3 and via fall (4:50). Nelson has been all but untouchable at 285 for the last few years, and while McMullan is very good himself, he hasn't shown any indication that he's cracked the code to beat Nelson.
DEC: Nelson DEC McMullan