All-American Iowa wrestler has been accused of illegally shooting a duck with a bow and arrow.

The Hawkeyes are back hunting illegally. Senior Ethen Lofthouse, a two-time All-American (5th at the 2012 NCAA Tournament, 7th place at the 2011 NCAA Tournament), has been charged by Iowa City Police for hunting out of season and discharging a bow within city limits. At 12:40 PM a call was made to Iowa City police to report "a group of college students behind the apt building shooting arrows at the ducks."

Police made contact with the residents, including Lofthouse, who showed the officers the dead duck, a mallard. Police said while they were questioning one of Lofthouse’s roommates, Lofthouse admitted that he was the one who shot the duck with his bow and showed officers the bow he used to make the kill.

Lofthouse told police he was an avid hunter and had intended to eat the duck. Lofthouse was cited for discharging the bow and hunting out of season.

In addition to the legal charges noted above, Lofthouse will also be subject to the process outlined in the UI Athletics Department Student-Athlete Code of Conduct.

Of course, Lofthouse isn't the first UI wrestler to get in some hunting-related trouble; he's not even the first UI wrestler in the last twelve months to run afoul of the law in this context. Last November, Alex Meyer and Connor Ryan were arrested and charged with illegally hunting rabbits with BB and air rifles. Three years ago, Mike Zadick, a former assistant coach on the Iowa wrestling team, was also investigated for illegal hunting activities. Let's hunt within the laws, Hawkeyes.

It's unclear what the exact impact of this offense might be on Lofthouse's wrestling status; Meyer and Ryan were both subject to suspensions, but both also redshirted last year, so the impact was minimal. Lofthouse is projected to be Iowa's starter at 184 lbs. this year. My guess is that he might get suspended for 1-2 of Iowa's early competition dates (see: Iowa's 2013-14 schedule). If Lofthouse is suspended, the favorite to replace him in the Iowa lineup is likely RS freshman Sammy Brooks. Brooks was one of Iowa's top recruits a year ago and went 19-9 while wrestling unattached in 2012-13. 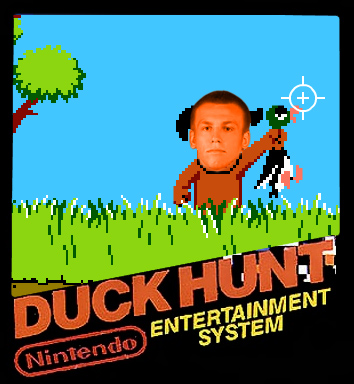 If Lofhouse can kill a duck with a bow he has to be amazing at Duck Hunt. I challenge you to go home dust off the old NES. Post your high scores with pics in the comment section. Happy Hunting