Finally, after weeks of waiting, weeks of practice, and weeks of speculation, the covers are about to come off the Iowa wrestling team. It's time to suit up and start wrestling for real now. Iowa opens the season today with a triple-header from Chattanooga, TN. Iowa wrestles Cumberland at 2:30pm CT, #17 Virginia at 400pm CT, and host Tennessee-Chattanooga at 600pm CT. Opening a season with multiple dual meets in a single day is nothing new for Iowa -- see: the Iowa City Duals -- but it's worth noting that the competition here is a cut or three above the teams Iowa usually faces at the Iowa City Duals (thanks mainly to the presence of Virginia).

There's no TV coverage for the meets, but Mark Ironside and Steven Grace will be calling the action on KXIC 800-AM and Hawkeye All-Access ($) and you can also follow along on Twitter with @IowaWRLive and @Hawks_Wrestling. 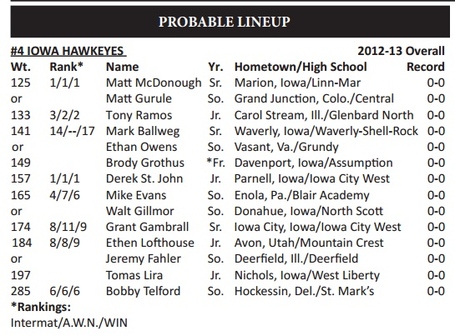 Given the fact that there are three duals in one day (with very little time in-between meets), it's no surprise to see multiple guys listed at several weights. I fully expect that we'll see few Iowa wrestlers compete in three matches today.

The biggest surprises among the names not listed are probably Josh Dziewa (141), Mike Kelly (149), Patrick Rhoads (149), Nick Moore (165), and Nathan Burak (197). Given the relative uncertainty at some of those weights (in particular, 149 and 197) it would have made sense to split the matches between the guys vying for the starting spots. But there's also a very sensible explanation: the Lindenwood Open (which Iowa competed in last fall) is being held this weekend in Missouri and several Iowa guys are likely headed down there to compete unattached. So it's likely that all of those guys will be in action at the Lindenwood Open (as will some of their most celebrated true freshmen, like Cory Clark, Thomas Gilman, and Sammy Brooks), which should give them some good early-season experience (Oklahoma State, Illinois, and Misosuri will all be in action at that event). The Burak decision is especially interesting since sending him to Lindenwood to compete unattached rather than using him in one or more of the duals in Chattanooga allows Brands to hold off on making the call to yank Burak's redshirt this year. I still expect Burak to be the starter at 197 for Iowa this year... it just might take a few weeks for that to become reality.

As far as the meets themselves go, I'm not going to do full previews. For one thing, it's hard to find projected lineups for Iowa's opponents. For another, the duals with Chattanooga and Cumberland are unlikely to be remotely competitive -- Iowa should thrash both of those teams. The dual with Virginia should be far more competitive; they have five ranked wrestlers and should be able to give Iowa some very strong competition at a few weights. So let's just take a look at a few of the most intriguing matches that we're likely to see today.

McD certainly won't be easing into the 2012-13 season, not with a pair of opponents like Snyder and Soto. Snyder was the ACC champion a year ago and a two-time NCAA qualifier and most of his losses were to high-end competition (Minnesota's Zach Sanders, Penn State's Nico Megaludis, Missouri's Alan Waters, Cornell's Frank Perrelli). Soto (who already lost to Snyder, 6-1, earlier this season) has a win over Virginia Tech's Jarrod Garnett (an All-America contender at 125) already this year. He's dropping down from 133, where he was Southern Conference champion and an NCAA qualifier in 2012. Both Snyder and Soto are beatable opponents, but they should make McD work a little harder than we typically see this early in the season. What adds a little additional intrigue is the fact that McD does struggle a bit early in the season at times; he had a narrow win over true freshman Cory Clark at last week's wrestle-offs and lost to Illinois' Jesse Delgado in December last year.

I listed this one because I decided to list all matches Iowa wrestlers could have today against ranked opposition... but this probably won't be that interesting. The gap between Ramos and Spisak figures to be pretty large and I fully expect Tony to pick up some bonus points for Iowa here.

Well, Brody, there's no hiding today -- let's see what you're made of. Valenti redshirted last season, but he was an All-American and the ACC runner-up in 2011. This match should hopefully give us some idea of how much Grothus has improved since last year and where he stands with some of the better guys at this weight (with the obvious caveat that one match is a very small sample size).

Evans' season ended on a bitter note last year with a 1-2 showing at the NCAA Tournament that left him far from the podium. And now The Man won't let him have a handlebar mustache. Scandalous! Hopefully Evans is ready to take out some of that aggression on Sulzer, an NCAA qualifier a year ago. (FUN FACT: Both Evans and Sulzer were eliminated from the NCAA Tournament by Wisconsin's Ben Jordan last year.)

We'll also get an early look at how Gambrall stacks up to a solid wrestler at 174. Fausey, the 2012 ACC champion and a two-time NCAA qualifier, went 24-5 last year, which included two narrow losses to Minnesota's Kevin Steinhaus and Central Michigan's Ben Bennett. (In fact, like Gambrall, Fausey appears to be making the cut to 174 this year from 184.)

Again, the overall outcome of the duals shouldn't be in much doubt; Iowa will steamroll over Cumberland and Chattanooga. The Virginia match could be a bit close... but probably only if Virginia wins every single match where they have a ranked wrestler (and also prevent Iowa from getting bonus points in any of the other matches, where they'll likely be pretty heavy favorites).

I'll try to update this post/thread with results throughout the day. Feel to free to post results or just discuss 'em in the comments, too.