Temperatures are dropping, leaves are falling, and the days are getting shorter: winter is coming. It's time to strap on our headgear and get ready for the coming of the White Walkers Iowa wrestlers. It's almost time to hit the mat again, which means it's definitely time to preview what to expect from the Iowa grapplers in 2012.

Share All sharing options for: A Winner is You! 2012 Iowa Wrestling Preview: 174 lbs.

While we try to forget figure out this miserable mystifying football team and celebrate anticipate the return of our postseason-aspirant basketball team, there's another team that's worth discussing: the Iowa wrestling team. They'll be going after their fourth national championship in the past six years, so it behooves us to preview that quest. In the spirit of our Assume the Position series of football, we bring you A Winner Is You!, a weight-by-weight breakdown of the Iowa wrestling team, counting down from the weight we have the most confidence in to the weight we have absolutely no clue about. Enjoy!

The Baby-Faced Assassin would be a really great nickname for Grant Gambrall -- I mean, just look at him. He's a fifth-year senior, but he still has the face of a 7th grader. But while living up to the "Baby-Faced" part of that moniker is no problem for Gambrall, the "Assassin" part is a bit of a problem. Outside of his remarkable 3rd place finish at the 2011 NCAA Tournament, Gambrall hasn't won big at Iowa. And as far as wrestling an aggressive, "murderous" (in a competitive sense, not in a "actually takes human lives" sense) style, well... not so much. He's also spent much of his Iowa career using "The Lion Sleeps Tonight" as his walk-out music. So yeah: Gambrall doesn't exactly have much in common with cold-blooded killers.

But hope springs eternal and Gambrall has another year to silence his doubters and leave us all with a more favorable impression of his topsy-turvy Iowa career. And it looks like he'll get to do it at a brand-new weight, too. There had been rumors about Gambrall dropping to 174 all summer and those rumors were confirmed last week -- first by Tom Brands at his presser at the Media Day event for Iowa wrestling, and again when Gambrall indeed competed at 174 during the wrestle-offs. So yeah: Gambrall competed at 197 last year and will be competing at 174 this year. Let that sink in for a moment.

It's actually not an insane idea, though. Gambrall was never a particularly big 184er (which made him a rather Liliputian 197er, unfortunately) and his strengths were always his quickness and his length. Those figure to still be assets for him at 174 -- and it's not likely that he'll be out-muscled as often at that weight, either. 174 could very well be just what the doctor ordered for Gambrall. Still, weight hasn't been the only reason behind Gambrall's up-and-down Iowa career -- there's been a mental aspect as well, with his confidence seeming to wax and wane more often than the moon. A drop to 174 alone won't be enough to solve that issue for him, so we're left hoping that Gambrall is motivated by a desire to erase the bad taste of last year's disappointment and end his Iowa career on a high note. He has the ability to do just that -- he has strong takedown defense, underrated abillity in scrambles and riding, and some decent shots. He had difficulty finishing some of those shots at 184, but with the strength disadvantage (hopefully) negated by the move to 174, his finishing ability could well improve.

The main backup for Gambrall figures to be Kris Klapprodt, a redshirt freshman from South Dakota. Klapprodt went 15-4 wrestling unattached a year ago. Right now, the most notable thing about him seems to be his hair, which is... interesting. 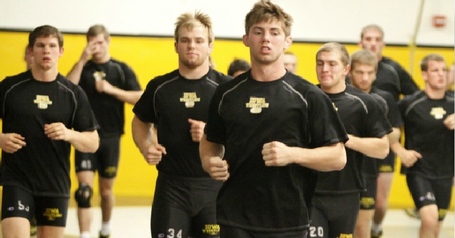 Klapprodt entered Iowa without much recruiting hype, but after two years in the Iowa practice room, he could have a very real opportunity to make the team next season, when Gambrall has departed. In fact, his biggest threats to a starting spot might be guys currently wrestling at other weights -- Mike Evans (165) and Ethen Lofthouse (184). But that's a conversation for several months from now.

The other man at this weight is true freshman Alex Meyer, a high school teammate of fellow freshman Cory Clark. Like Klapprodt, Meyer seems most notable right for his hair -- earlier this fall he was sporting one hell of a mullet. 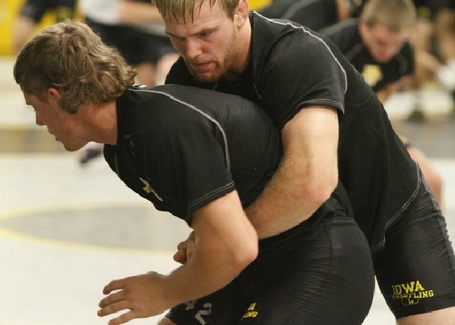 That's, uh, him on the left. (University of Iowa Photo Services -- Darren Miller)

Mulleted wrestlers have a long and storied past at Iowa (just peruse the Iowa Media Guide), so if the hair makes the man, Meyer could be on the path to being a fabulous wrestler. Or he could just be a dude who likes a mullet. You never know. Meyer was the 41st ranked recruit overall last year (per d1collegewrestling) and was an Iowa state champion last year. He needs some seasoning, but given a little time he should definitely contend for a starting spot at Iowa.

THE POTHOLES IN THE ROAD

With Lofthouse and defending national champion Ed Ruth moving up to 184 this year, only four of last year's All-Americans are back at 174. This is still a pretty talented weight, though, with Nebraska's Robert Kokesh moving up from 165 (where he was ranked in the top-10 for most of the season) and joining the likes of Maryland's Josh Asper and Northwestern's Lee Munster, talented 174ers who stumbled in the NCAA Tournament last year. Much of that talent is concentrated in the Big Ten; including Gambrall, seven of InterMat's top ten at 174 are in the Big Ten. That should make for a very interesting season for Gambrall, as we can see below...

Welcome to 174, Gambrall -- hope you survive the experience. Gambrall's slated to face 11 of InterMat's top-20 this year, including seven of of the top ten. Yikes. Let's hope this move to 174 really will unlock the best Gambrall because he's going to need to be in top form against this competition. He'll get an early test this week with the 9th-ranked Fausey of Virginia and deal with the daunting task of facing both the #1 and #2-ranked wrestlers at this weight in the span of ten days in early January. But the stiffest test looks like the four-match stretch at the end of January and the beginning of February, when he faces the wrestlers currently ranked #s 4-7 in InterMat's rankings in back-to-back-to-back-to-back matches. Those matches will be critical for seeding at the Big Ten and NCAA Tournament.

Gambrall's NCAA experience has reached some impressive highs (3rd place in 2011) and depressing lows (2-2 in 2012). And now he's cutting down to a new weight and facing some brand-new competition, making a prediction even trickier. But I'm an optimist and I think this move is going to be a very good thing for Gambrall. I'm not going to go so far as to call him a serious title contender... but I think he'll get back on the podium at the NCAA Tournament and I think he'll be a top-4 finisher at the Big Ten Tournament.