The Playbook: We're Talkin' About Practice

One play from Kids Day is starting to change the way I think of the Iowa offense.

Share All sharing options for: The Playbook: We're Talkin' About Practice

Saturday evening I didn't actually get to attend the open practice. So, as I was paining my son's bedroom, I followed along to the best of my ability via Twitter. It was hard to take much away from it, except that everyone loves newcomers Damond Powell and LeShun Daniels, but there was one tweet that caught my attention.

So yes, this is a good run by Daniels. He is big, he runs fast, he has huge freaking arms, etc... But this play caught my eye because of what the WRs are doing here. At first glance it doesn't look like much. Jacob Hillyer just kind of stands there, and Kevonte Martin-Manley starts to attempt to block the cornerback. But, what I think this is setting up is a screen as an option on this zone read run.

I am no expert on spread offenses, or offenses in general. But here is my take on the play... It is a common concept for the zone read/spread type offense out there to package the zone read with a WR screen. The idea is to keep the defense honest, specifically the outside linebacker or nickleback covering the slot receiver.

This ends up being a simple read for the quarterback. Traditionally with the zone read, the QB reads the unblocked backside defensive end. If the DE crashes towards the running back, the QB keeps it...otherwise he hands it off. In this case, the DE is blocked and instead the QB is reading the OLB (or nickle). If the OLB stays in position and covers the slot, then that keeps him out of the box and will leave more room for the running back, so the QB hands off. If the OLB cheats in to defend the run, then the quick screen is available and the QB keeps and throws the pass. 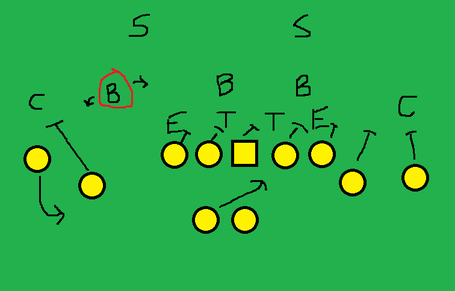 Image from the Iowa playbook

Check out the second part of this video on the "Zone Key" that was posted on UCLA blog Bruins Nation. The little circle highlights the defender that the QB is reading and really helps illustrate how this play works.

Now if you go back and watch that Vine of the Daniels run, take a look at the defender across from Martin-Manley. I think it's a OLB, but I can't quite make out the number. You'll see as the play starts, the defender briefly follows KMM. It's not long before he recognizes it's a run, but by the time he starts chasing after Daniels, it's too late. Daniels is into the secondary already, and when Mr. OLB is starting to catch up, Daniels is being tackled 30 yards down-field by the safeties.

So what does this mean? I thought we hated horizontal passes and boring inside zone runs. We found out last year what happens when you combine KF's traditional inside/outside zone rushing attack with GD's horizontal passing attack. Oil and water. But here the running game and passing game compliment each other to the point that they are the same play, just a different read. When you add in the no-huddle and tempo, Iowa can get into this play very quickly and based on the alignment of one defensive player (and the personnel there...maybe they are stuck with a nickleback who is just covering the slot guy or a LB that wants to stay in the box) should have a successful play on the ground or through the air.

Watching through some of the videos available from the rest of the open practice, I saw this play a few other times. The one linked up there around 0:25, Mark Weisman got the carry, and Damon Bullock was the target for a possible screen. If you go a little further, there is another one around 1:05. There weren't any examples that I could find where the screen was actually thrown. Probably because an Iowa defense is always going to walk out a linebacker over the slot receiver. But there was also plenty of play-action from a zone-read type fake and some other quick WR screens that round out this offense.

Now while I'm not anywhere near sold that Iowa will have a competent offense this year, the needle is starting to move in the right direction. I can at least see where Greg Davis might be going with all of this and I think I might like it.