The Buzzer 2013: Is Jarrod Uthoff a Magician?

Is Uthoff the missing piece to return the Hawkeyes to greatness or just a whole lot of hype?

Share All sharing options for: The Buzzer 2013: Is Jarrod Uthoff a Magician? 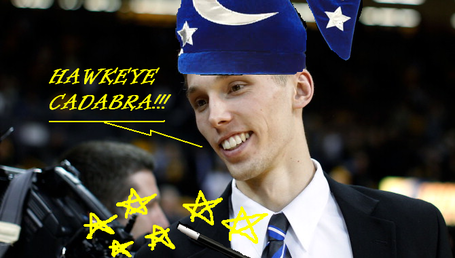 The most intriguing player on the 2013-14 Iowa basketball team hasn't taken a shot yet in college. He hasn't even suited up yet. And I'm not talking about Peter Jok.

Jarrod Uthoff is the single biggest wildcard on next year's Iowa team. Sure, we want to see if Marble's final 15 games, when he averaged 18.1 ppg, 4.0 rpg, 3.4 apg and 8 games with 20+ ppg (including all 4 of Iowa's NIT wins), was a sign of things to come in his senior season. And we want to see if Adam Woodbury and Mike Gesell can build on solid freshman campaigns (4.9 ppg, 4.8 rpg and 8.7 ppg, 2.6 apg, respectively) and emerge as bona fide stars for Iowa as sophomores. But the unknown is always more interesting -- even more so when there's so much talk about the unknown being really, really good.

He had a dominant season as a high school senior (26.2 ppg, 11.2 rpg) on his way to the 2011 Mr. Basketball award in Iowa and he's been tabbed by McCaffery to be "an impact player" next season. That's saying something for a team that returns all but one player from last year's squad and that finished the season playing at a high level. On the BHGPod a few weeks ago, Gazette hoops writer Scott Dochterman noted that he thought Uthoff would be an immediate starter for Iowa, which is an impressive statement to make when you realize that Iowa essentially returns all five starters (considering that Eric May mainly only started when Gesell was hurt) from this year's team. Consider also that starting Uthoff would likely means sending either Melsahn Basabe or Aaron White, two of Iowa's most experienced and talented players, to the bench (Uthoff probably can't start in the backcourt with Marble). If Uthoff is good enough to move himself into starter consideration, odds are that he's very good indeed.

So what makes Uthoff so good -- or at least so intriguing. Versatility. Sayeth McCaffery:

"The thing I like about (Uthoff) is," McCaffery said, "you can play him as a long, shot-blocking post player or you can play him on the perimeter and the guy who can put it on the deck, hit a pull-up jumper, hit his 3 and make a play for someone else off the dribble.

"When you put that skill set together, you have a very impressive player. I think with the other players we have, it’s something we desperately need."

Calling him Aaron White with range, or Dunk L'Orange with a jumper, is a bit reductive and not entirely accurate -- but it doesn't seem to altogether wrong, either. His size along makes him a fascinating player -- he's 6'10", or as big as Gabe Olaseni, in other words -- but couple that with what seems to be an impressive array of basketball skills and you could have something rather special. Uthoff could be a potential match-up nightmare for opponents.

It's no secret that Iowa's offense last year was rather limited. Other than Marble and, occasionally, Gesell, Iowa struggled mightily to create its own shot in half-court situations. Couple that with a host of players with inconsistent post games (such as White, Basabe, Woodbury, Olaseni) and some horrendous outside shooting from almost everyone on the team and you have an offense that could really bog down at times. The hope is that Uthoff could help solve several of those problems. Hell, if Uthoff can just make shots he could be a tremendous shot in the arm for Iowa next year. Iowa was 230th in the nation in FG% last season (42%), so if he can hit a few jumpers consistently or emerge as someone who can make 3s, well, hallelujah. But the potential might also be there for much, much more.

Of course, while potential is nice, proven production is better -- and Uthoff doesn't have any of that yet. By the time he suits up for Iowa next November, he won't have played a meaningful game in over two years. (On the other hand, he has been practicing for two years, so it's not as if he's been sitting on his ass and doing nothing. Actual games are better than scrimmages, but it's not as if he's been totally out of basketball or anything.) The kind words from McCaffery, his teammates, and "inside sources" (there were no shortage of claims that Uthoff was easily one of the best five players on the team in practice this past season) are nice, but it's not unreasonable to be skeptical until he actually does something in a real game, either.

Still, I think there's enough evidence to suggest that getting excited about what Uthoff will bring to the table next year is not at all ridiculous. Coaches talk up players a lot, but McCaffery has tended to be refreshingly honest in his comments to the press and, again, he knows better than any of us what he has coming back next year -- and he still expects Uthoff to be an impact player. Dochterman has been able to see Uthoff practice and talks to people within the team who have seen Uthoff play -- and he expects Uthoff to start. Uthoff's fabulously diverse skill set makes him one of the most exciting stories of the 2013-14 season -- and I can't wait to see how it unfolds.