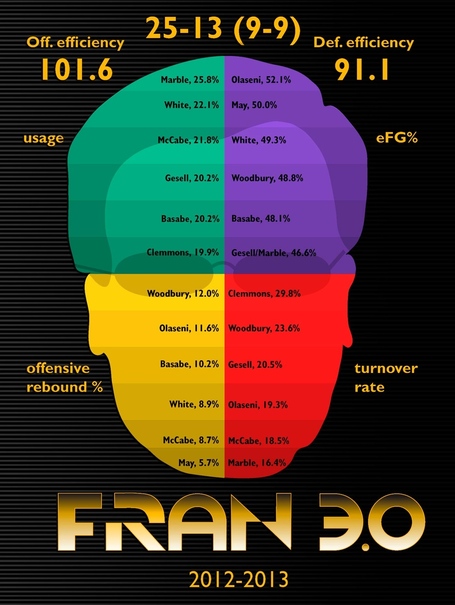 [Previous versions of the all-knowing Fran-head here and here]

Imagine you are a head basketball coach for a college team and a fortune teller informs you that the following will come to pass for your team in the coming year:

What would you do? How would you manage to translate what you know will be miserable shooting into a largely successful result? In other words: how do you win with a team that can't shoot? How do you win at Iowa in 2013?
The answer, for Fran McCaffery, boiled down to four things:
1) Play outstanding defense
This is almost the entire story of Iowa's success this past year, and it can't be stressed enough how great a jump the team made from last year to this year in terms of their overall defense. Here are some of the key numbers for Iowa's D over the past three years:

The improvement in defensive efficiency is the most impressive: Iowa went from a defense that ranked 180th in the country last year to one that ranked 22nd in the country this year. The other numbers show how they made that adjustment: they cut down on the number of three-pointers their opponents attempted (from 261st in the country in 3PA/FGA in 2012 to 179th in 2013), they forced their opponents into a lower effective field goal percentage (278th in 2012 to 17th in 2013), and they maintained their usual practice in the McCaffery era of not fouling very much (81st in opponent's FTA/FGA in 2012, 66th in 2013).
And in spite of Iowa's occasional use of a full court press, they did not force very many turnovers: their opponent's turnover percentage (TOs/possession) ranked 193rd in the country. The Hawks mainly used the press to slow down their opponents and set up their match-up zone, which they used pretty regularly for at least five or ten minutes a game. And, despite the presence of Adam Woodbury and Gabe Olaseni, they didn't block many shots: they ranked 271st in the country in blocks per possession.
So how did they do it? A lot of factors contributed, but the biggest change seemed to be a great improvement in the way they guarded the pick and roll. And it's here that Woodbury deserves a lot of credit for the impact he made. Many times he was forced out to the three-point line to hedge on a pick and roll and then recover to his man in the paint. For a 7'1" guy who's not always the fleetest of foot, he did a pretty good job of both disrupting the driver and getting back to his man in time. But everyone on the team was called to double on pick and rolls at some time, and they did a solid job of frustrating ball-handlers from getting into the lane. The few times a big, strong point guard managed to get around Iowa's hedges (memorably Penn State and Nebraska), Iowa had some major breakdowns.
Just as important, though, was a seeming philosophical change regarding their defense of the three-point shot. After getting torched from three again and again in 2011-12, Iowa's coaches seemed to learn their lesson in 2012-13. Whenever the ball got passed to a potential three-point shooter, Iowa did a much better job of switching to deny the shot. It was sometimes a scramble to recover after that point, but they did a much, much better job of keeping track of shooters this year than last. Again, none of this happened in a vacuum: the presence of Woodbury helped, as did the long arms of Aaron White and Melsahn Basabe. But Iowa's guards deserve a lot of credit for chasing opposing shooters around the perimeter and not getting lost. Eric May, Mike Gesell and Anthony Clemmons all did yeoman's work in this regard. May, in particular, improved as a perimeter defender (he had a bit of a problem fouling at first) and will be sorely missed on defense next year. And Clemmons, for all his flaws on offense, was a valuable defensive player.