Dino Gaudio went off the reservation by putting Iowa at No. 5, but he's hardly the only one expecting a bright future for the Hawkeyes.

One of the many rites of March Madness is the filing of the first (unofficial) preseason polls before the confetti has even been swept up from the national championship, a way for the other 346 teams in Division I to start taking stock in a brand new season (though if they're in the Patriot League or about 20 other conferences, they probably shouldn't be spending any time looking for themselves or their league rivals in said Top 25). It's fun. It's good.

At Iowa, of course, we've grown accustomed to just finding the other Big Ten teams in these "way too early" polls and, if nothing else, just getting a sense of how good the conference is going to be at the top. But looking for Iowa's name to come up? Nah. C'mon. Not in the Top 25.

Folks, it is clearly a new day.

Several high-profile writers and media outlets have put the Iowa Hawkeyes in their Top 25 or otherwise singled the team out for significant improvement in 2013. Not everybody did, mind you; CBSSports.com left the Hawkeyes off their list, and hey, that's fine. Fran McCaffrey isn't a yeller or anything.

It's just that basically nobody else did the same thing.

ESPN.com slots Iowa at No. 25, one of "only" four Big Ten teams in its early rankings. ESPN says "the well-coached Hawkeyes have a chance to finish as high as third in the Big Ten," which is familiar language to anyone who was a football fan five-plus years ago.

Jon Rothstein of CBS New York slots Iowa at No. 17, so marginally behind Michigan State (16th) and Indiana (13th) that he can have Iowa fifth among Big Ten schools but still say it "will be among the Big Ten's elite" with a straight face. Also, let's not forget that the fifth-place Big Ten team just so happened to make the national championship game this year (BREAKING: Rothstein predicts Iowa to Final Four!). The fourth-place team lasted as long as [REDACTED] and New Mexico did, but shhhhhhhhhh.

The USA Today got a little more boisterous than Rothstein, hailing Iowa's returning experience and putting the Hawkeyes all the way up at No. 16.

And then things get a little crazy. BeyondTheBets.com threw Iowa at No. 13, slotted just between VCU and (lol) New Mexico. They didn't provide a blurb for the Hawkeyes, but interestingly, they did put title odds at +5000 (which is to say, 50/1), which is significantly higher than several teams ranked below Iowa. In other words, Iowa's higher in the polls but less likely to put together a title run. More on that in a bit.

The last, best ranking? Per Brendan Stiles, Dino Gaudio (former Wake Forest head coach) went on one of ESPN's shows and put Iowa at friggin' No. 5 in the nation, tops among all Big Ten teams. For real: 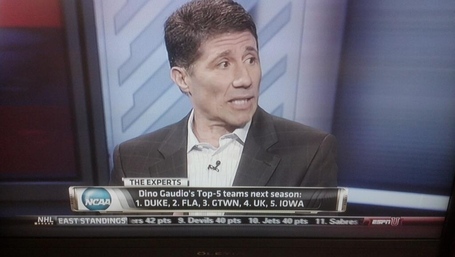 We can't find video of the... let's call it "incident" on ESPN.com, and that's because we're guessing a producer grabbed him after the segment and asked "what the hell was that?!" and doing the throat slash motion to make sure all evidence of the segment was destroyed. But one TwitPic survived! ...anyway, yeah, this is crazyballs.

The one piece of analysis that's sticking with us the most is John Gasaway throwing Iowa in his list of five teams to make a leap in 2013-14 (ESPN Insider, aka $$... sorry). Heeding the words of Mr. Gasaway is always a smart idea. He first notes that Iowa had a brutal stretch of luck based largely on the state of the Big Ten last year and says if it comes out and plays the exact same way, it'll do better. But then he goes one better:

I think it more likely, however, that the Hawkeyes will take a significant step forward in both performance and results. With the exception of departing senior Eric May, McCaffery will return essentially his entire roster, which specifically includes Iowa's efficient interior scorer Aaron White.

Again: "the Hawkeyes will take a significant step forward." From the mouth of the Wonk. And you know, it's awfully hard to disagree.

Yes, White's probably butting up against the limits of his capabilities in the paint, and with Jarrod Uthoff joining the already deep mix at forward, White may not even see the 29 minutes a game he got this season. But if White goes down to 23-25 minutes a game, so much the better, because his level of intensity can ratchet up that little bit more as a result. And make no mistake, 23-25 minutes a game doesn't make someone a supporting cast figure in Fran's system; only two players got that much this season—White and Roy Devyn Marble.

Iowas going to get significant improvement at center and point guard, just by dint of the fact that Mike Gesell, Anthony Clemmons, Adam Woodbury and Gabe Olaseni have so much room for improvement from another year of playing ball. Clemmons' turnover rate should dip, Gesell will have an even better rapport with his players, Woodbury's going to be more assertive at the bucket just because it's impossible to be less so, and Olaseni should continue his Kurt Looby-esque path of steadily catching up to his phenomenal athleticism. All four of those guys were, at times, liabilities on the court this season. That will be much less so the case in the coming year.

It's not just that one might want Gasaway to be right—and an Iowa fan should surely want him to be right. It's that it's hard to even see how he might be wrong.

That roster trades Eric May for Uthoff (who will have been practicing with the team for over a year once the season comes) and much-needed shot creator Peter Jok, and gives everyone else another year of experience. How does that roster not improve substantially on paper from 2012-13? And while the non-conference slate is assuredly going to get tougher (again, how could it not?), the conference schedule should be tempered in its sure losses, what with so many of the top teams taking heavy personnel losses.

We're not trying to go Full Gaudio on this. Iowa's not a Top 5 team. Teams ranked that high have NBA prospects all over the place and multiple players who are a severe problem for the other team. We're not talking "Aaron White and Roy Devyn Marble" type problems, we're talking "Cody Zeller and Victor Oladipo" problems. Or "Trey Burke and Tim Hardaway Jr. (and if it's March, Mitch McGary)" problems. "Russ Smith and Peyton Siva" problems. Iowa's not there, no matter how experienced its front line is.

So that's why we're not surprised to see this notion of Iowa being ranked No. 13 by one Vegas outlet but with worse title prospects than several teams slotted lower. This Iowa team has things like experience and depth, but the elite talent necessary to take it all the way just isn't there. That's fine, though.

For one, we're early in the Fran era. For two, Wisconsin's been in the same boat for the last decade, and we'd probably kill to have had Wisconsin's program for the last 10 years, that level of consistent success without a prayer of a national title. If Fran has taken Iowa to those heights already (and as Mr. Vint points out, his retention rates suggest Iowa will be in decent shape year-to-year going forward), then what's there to complain about?

And really, isn't it great to have to point out why your favorite basketball isn't Top 5 material? That it doesn't go without saying anymore? That some chucklepants guy on ESPN probably needs to be talked down to slotting your team at 15th in the nation? Hell, Iowa was barely 15th best in the Big Ten just three years ago. The future is bright. The media are taking notice. This is cool.