The Iowa offense is broken. Luckily, the Iowa coaches have a radical plan in mind to fix it.

As has become tradition during the bye week, Kirk Ferentz's regular weekly presser gave way to pressers with his offensive and defensive coordinators, Greg Davis and Phil Parker.  And this came out of today's presser with Davis:

You realize what this means, of course? 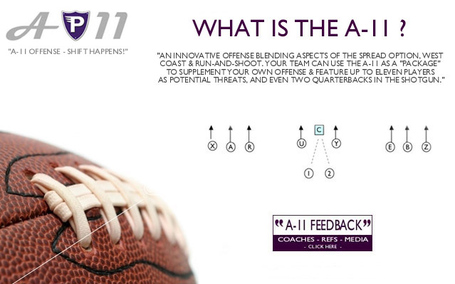 It's perfect!  We answer the "Rudock or Beathard" question by punting on it altogether (the most Ferentzian response possible, you have to admit) and playing them both.  We can also answer the fan complaint of getting more of Iowa's potential playmakers (Powell, Willies, even Parker or Canzeri if you split them out wide) onto the field.  Hell, we can even probably address the problem of Iowa's inconsistent guard play by removing them from the equation altogether. So many problems solved!

(Yes, yes, the A-11 offense isn't technically legal in the NCAA.  A minor technicality and one that we're sure can be overcome with some open and honest conversations between Big Jim Delany and the NCAA Competition Committee.  And by "open and honest," we mean bribes.  What's the point of all that filthy BTN lucre if you don't use it, right?)