Kirk Ferentz talked to the assembled media Tuesday.  Here's what we learned.  As always, transcript courtesy of Hawkeye Nation.

No real news.  The guys who were healthy last week are still healthy.  Macon Plewa is day-to-day.  Riley McCarron is back, but other long term injuries haven't changed much whatever let's get down to it.

This press conference offered nothing, initially because Kirk just didn't want to talk that much (a staple of his post-loss press conferences, basically making the press work unnecessarily hard for basic news) and later because he wanted to talk about old Iowa teams.

So let's talk about the offense instead, because while Kirk didn't say anything coherent, it makes some bizarre sense when taken as a whole.

Iowa scored exactly half as many points against Iowa State as North Dakota State, a team filled with guys Kirk would love to tell stories about had he recruited them.  He didn't, of course.  And if he had, they would probably be scoring 17 against Iowa State right now.

Is Kirk mad about the offense?  No more than he ever is.

Q. Have you been able to discern some of the reasons why the offense struggled the last couple weeks?

We're just not playing well enough to win right now. Go back to work this afternoon.

That was seriously the answer to the first question of the day.

Why didn't the most coveted halfback on your roster sit on the bench all day while your offense averaged under 3 yards per carry against one of the worst defenses in football?

Q. LeShun Daniels just didn't get in the rotation?

We're trying to find the right rhythm right now and the right mix. Yeah, clearly we haven't found it yet. We're going to keep working on that.

That didn't even bother answering the question.  It did, however, lead to a follow-up.

Q. When you talk about the right rhythm and right tempo, what precisely does that mean?

Well, whatever it takes to move the ball. Sounds like that's the focal point now. We've had some really good drives this year, some long drives, productive drives, but we haven't done it consistently enough. That was a big factor certainly I think more so in the third quarter.

Ignore that "whatever it takes to move the ball" is the answer of someone who has no idea how to move the ball, and focus instead on this: Ferentz's offense hasn't had the "right rhythm and right tempo" in nearly a decade.

Just to give him the benefit of the doubt, let's take out 1999 and 2000 when he was working with an empty cupboard.  Here's the Iowa offense, compared to the median of the Big Ten and the country in points per game since 2001: 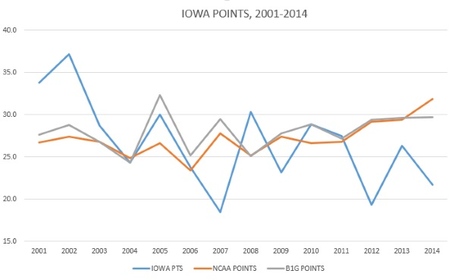 Look at the trend line for both the conference and the country since about 2011: While it's been an uneven climb in scoring since 2001, that is especially true in the last four years (and if you wanted to explain the Big Ten's problems, that lower-than-the-national-average scoring in 2014 is a prime culprit).  Iowa, on the other hand, has tanked.  It's been since 2008 since Iowa's offense has outdone both the conference and national average, neither of which should be much of a problem.  More damning: Iowa hasn't been close since Greg Davis took over in 2012.  Even last season, which felt like an improvement, was three points lower than the median national team.  Look at the trendline for Iowa's points production against the national median. 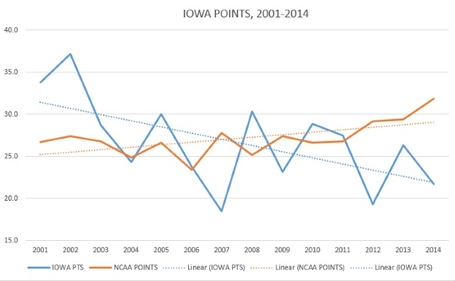 Iowa has lost 10 points per game while the rest of the world has added five.  You know why we struggle with awful opponents?  It's because we're awful.

The saddest part: Iowa's always been better at scoring than amassing tons of yards.  It's the basic premise behind Ferentz's punt first, ask questions later style.  Iowa wins the field position battle, then cashes in.  At least, that's how it is supposed to work in theory.  Here's the yardage figures. 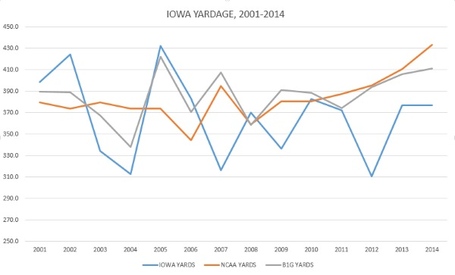 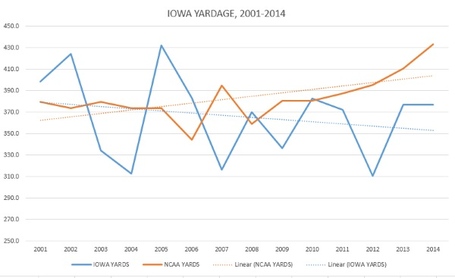 The national trend is not as pronounced (though the recent trend is unmistakable), but the Iowa output hasn't been above that trendline since 2006.  That is, frankly, unacceptable for any "Power 5" program, but especially one that hasn't changed coaches.

There is no doubt that Iowa's offense sucks, and it has been markedly worse since Davis joined the staff in 2012.  But it's not as if Davis inherited Chip Kelly's Oregon attack.  Iowa's offense hasn't been effective in years, and a change of coordinator isn't going to fix that completely.  A change in assistants might finally pair Ferentz's running game with a passing attack that makes sense in context -- there is zero doubt that this horizontal crap directly contradicts the running game by allowing the defense to load the box without recourse, a truth self-evident to anyone who has spent five minutes watching football -- but it still isn't going to make Iowa's running attack, or Iowa's offense, even marginally effective.

...and I'm not going to say that Ferentz should publicly throw his coordinator under the bus.  I'm happy that he didn't, in fact.  It would be uncouth, and it wouldn't be right.  Ferentz brought Davis in to "merge" his zone running game with Davis' passing game.  He's never fully bought into Davis' offense, and while I don't think anyone is advocating that he should, it's Ferentz's antiquated zone blocking scheme that is an entire generation behind other offenses, that has been completely solved by the defenses facing Iowa, and that mixes with Davis' passing game like oil in water.  It's that scheme, and not Davis' contributions, that are the constant between middling KOK ball and the more horrific offensive output of late.  And it's that zone running scheme that is the crumbling keystone of the entire offense.

Do we have a hope of fixing either the running or passing game?

So the bottom line is, one thing I'm firm on, I think we have to have the ability to be balanced, and we would hopefully play in a physical nature. We're not going to be a finesse offensive football team. Have the ability to run or pass. That could come out of a three‑wide set, could come out of a one‑wide set. I'm not as hung up on those things. Probably part of that, you know, it's where you coach, too. You have to recruit to whatever your style is going to be. If you're recruiting, there's ebb and flow, which most places there is. I think you have to have some flexibility there. That's kind of the deal there.

Personally my preference is to be a balanced attack.

Yep, we're screwed, and this is the entire point.  Kirk is absolutely right on what he can recruit.  Iowa is full of linemen and lacking in skill position players, and Iowa's offense should be geared to that.  WIsconsin does it.  Stanford, which identified a market discount for linemen and tight ends and exploited it under Harbaugh and Shaw, does it.  Arkansas does it under MANBALL proprietor Bret Bielema.  Alabama does it better than anyone else.  And we're about to see Paul Chryst's Pitt team do it this weekend.  But those teams aren't beholden to bullshit like 20-year-old NFL blocking schemes or balance at the program where "scratch where it itches" became a mantra.  Those teams run some zone, but they run more old school running plays in a manner than obliterates the small, fast offenses of the day.  Alabama runs everything to the boundary (the same side as the hash mark) to compress the defense and destroy them with linemen.  Iowa does the same, only in the most ineffective way possible: Slowly, with a play designed to stretch the defense and open holes in the interior.

This has nothing to do with tempo or rhythm or the other bullshit that's being spewed.  We're running Mike Shanahan's offense, and have been since Shanahan was with Denver.  You know what Mike Shanahan ran the last time he came back?  Zone read option, because the game has moved on.  We won't move with it until we do it with someone who is willing to see the reality around him.  Until then, we might as well run the wishbone.