Brandon Scherff is not human, you guys.

Brandon Scherff did it again, you guys.

Good god.  When the entire freaking room stops to watch you lift, you know you're pretty goddamn special.

As you might recall, this is not the first time Scherff has displayed his prodigious strength:

Earlier this month, FOX Sports' Bruce Feldman ranked Scherff #2 on his annual Freak List, spotlighting the freakiest athletes in college football.  Videos like the ones above would be reason enough for Scherff to make the list, but there's more:

Chris Doyle, Iowa's strength coach the past 16 seasons, has worked with everyone from Hawkeye first-round linemen Robert Gallery and Bryan Bulaga to three-time All-Pro Marshal Yanda. "In terms of pure explosiveness, (Scherff) is the best we've ever had," Doyle said. "He's in a league of his own." That really is a mouthful, when you consider that Gallery ran in the 4.8s at the combine and vertical jumped 30 inches despite weighing 323 pounds before becoming the second overall pick in 2004.

Yeah, he's a freak alright.  This is where we remind you that HE PLAYED QUARTERBACK IN HIGH SCHOOL.

So step aside, Hulk.

There's a new Scherff in town: 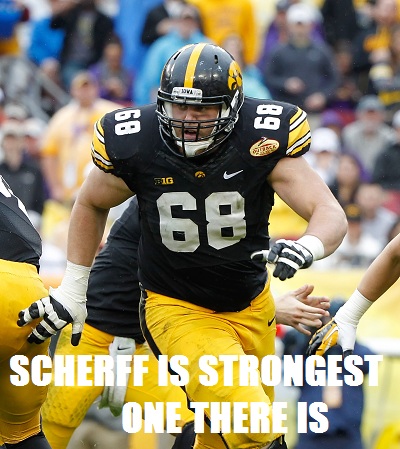