BIG TEN WIN TOTALS ARE OUT; IOWA AT 8.5 WINS

Share All sharing options for: BIG TEN WIN TOTALS ARE OUT; IOWA AT 8.5 WINS

Per Betting Talk (via Hlas), the over-under win totals are out now in Vegas for all of the teams in the Big Ten.  (Previously, only about half of the Big Ten teams had win totals posted; annoyingly, Iowa was not one of them.  As usual, these win totals are only for the 12-game regular season and do not account for potential conference championship game appearances, bowl game berths, or (now) national championship playoff games.

A year ago, fresh off a humbling 4-8 season and riding a 6-game losing streak, Iowa entered 2013 with a Vegas win total of 5.5.  They managed to top that with a few weeks to spare last year.  This year's number -- 8.5 -- won't be quite as easy to better, but they have the schedule to do so.  In case you've forgotten: 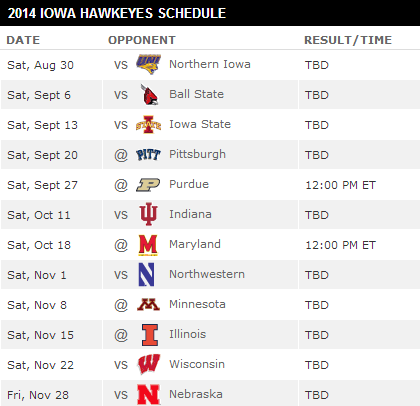 It's not exactly Murderer's Row out there.  The two hardest games come at the end of the season, but both are at home (Wisconsin, Nebraska).  That said, there are several potential landmines, too: Ball State was very good a year ago and Iowa has (sadly) lost to a MAC team each of the previous two seasons; Indiana beat Iowa the last time they played, should have a fireworks show-caliber offense, and has been a consistent pain in the ass for Ferentz-led Iowa teams; Pitt and Illinois beat Iowa the last time the Hawkeyes played in those venues and Minnesota has won two of the previous three games between the two held at TCF Bank (/he said, as painful in-person recollections of those games flooded his memory banks); Maryland is an unknown quanity; just Northwestern is another consistent pain in the ass; etc.