INCREDIBLY LOUD AND EXTREMELY BOGUS: Or, How I Learned To Stop Worrying And Love The Google

It happens everyday on the internet. Someone takes an event that occurred in one context and significantly alters its nature—by making it permanent and widespread, where it ends up in Google's unforgiving memory. Should Kevonte Martin-Manley be in the digital doghouse for life because someone thought he was rude and inconsiderate? Should people’s social transgressions follow them on a digital rap sheet that can never be expunged?

Share All sharing options for: INCREDIBLY LOUD AND EXTREMELY BOGUS: Or, How I Learned To Stop Worrying And Love The Google

"We live in an era of opinions. In the Internet economy - in which I am a loyal and grateful participant! - loud voices are more than just currency, they're coal. The Outrage Industrial Complex burns all day and all night with Twitter as its blistering engine room. A constant stream of fuel is necessary to keep the entire enterprise afloat, and so any event, be it the collapse of a government or the cancellation of a sitcom, is greeted with a near instantaneous torrent of reaction. Though the appeal of the virtual yawp can be undeniably intoxicating, I'm gradually finding it less and less tolerable. It's no secret that nuance and doubt are rarely retweeted, but as Twitter has metastasized, its vaunted panoply of voices has grown more strident and, oddly, more unified - not in their positions but in their ravenous insistence on having one. It's become less a conversation and more a crusade. Being silent is far worse than being wrong."

VIMH: The first sign that you're out of date my friend? Overuse, or even any use, of hyphens.

Then again, Andy Greenwald is 37-years-old and in a few short years from now when he looks back in search of the beginning of the end, this may be the column that was unwittingly his swan song to relevance, currentness, and with-it-ness. No matter, his quote above rings right to me. And, it's not just Twitter that's run amok. Consider Kevonte Martin-Manley and his recent slide into the mediated world of BuzzFeed style news reporting. After reading a half dozen versions of "news reports" about Martin-Manley's recent run-in with Johnny Law (with very little variance between any of them; suggesting one seed, many branches) I thought, "Why on earth would anyone think I ever care that a 21-year-old college student - who in the opinion of his neighbors, and thus the police - was playing his music too loudly?"

And the answer is: I didn't care. But, should I care?

VIMH: Bro, are you seriously going to get your panties in a bunch over this Martin-Manley thing?

This seemingly extraneous, decidedly local, Martin-Manley house party story (unsurprisingly) got picked up nationally by -- at my last cursory count -- 20 other sites. And at the end of the day it got front page coverage here, and we discussed it here and it was discussed on other Hawkeye chat sites, and now it has secured its space on the internet as considerably more than a superfluous arrest blotter report, forever.

It makes you wonder, why are the minor transgressions of college football players newsworthy? Ever. I mean, what the fuck? Is the state of journalism and/or the insatiable appetite of consumers of "the latest news" such that a minor citation handed out to an "of age" college student, in a college town, in the summer, reasonable front-page news...and for, like, nearly a goddamn week?! Is this such a curiosity that it must be reported? Is this so outlandish that it simply has to be shared? No and no. That the student happens to be a college football player is, of course, the raison d'être.

What's especially infuriating about the reporting of this "story" is that for some, today, this tiny, stupid constructed news blip about Kevonte Martin-Manley is all they know about him outside of his football exploits.

VIMH: Whoa. You're blowing this way the hell out of proportion dude.

And that SUCKS! Seriously, what does anyone really know about Kevonte Martin-Manley beyond his gridiron accomplishments and this brush with the law? What does anyone know about his charitable work or his academic awards or his willingness to help old people across the street? What does anyone know about his interest in learning Swahili or what may be the motivation behind his choice of major or what he wants to do in service to his hometown once his football career is over? Where are those front page blips, that lingered for a week? Where are those tweets that got retweeted? Where was the front-page news story from when Martin-Manley was awarded a Russ and Ann Gerdin Family Football Scholarship? Oh, right. 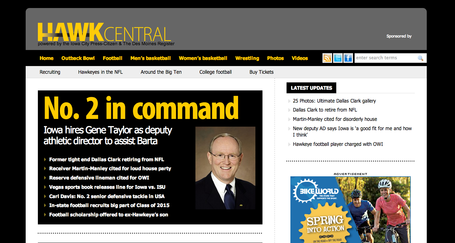 It's easy to be cynical about a lazy press when they do lazy things, like this (above). The Martin-Manley headline was stuck on the front page of that site for four goddamn days. Because, you know, he's engaged in criminal behavior and the people must know. I especially liked how it was surrounded by what appears to me to have been actual news. News I would actually want to read and know about. Because that is the company that the Martin-Manley story should keep, the company of real, hard news.

I cannot be any more cynical about the proliferation of this kind of sports news reporting -- namely, the trolling of arrest reports the morning after to see what's newsworthy with regards to amateur athletes; although, it's done for non-athletes as well. Most of what ends up getting reported after scouring these police blotters is incredibly exploitative to me. And certainly draping your front page with the non-story of Martin-Manley's citation is the perfect example of how to exploit an arrest blotter. Too often, an athlete's inclusion on the arrest blotter is nothing approaching newsworthy in my opinion; and, for the purpose of this post I am defining newsworthy as "whether information merits transformation into news stories."

"No," said the priest, "it is not necessary to accept everything as true, one must only accept it as necessary." "A melancholy conclusion," said K. "It turns lying into a universal principle."

In Franz Kafka's The Trial protagonist Josef K. awakens one morning to find a group of shadowy officials in his apartment.

VIMH: You realize this is like the third or fourth time you've namebombed a post with Kafka. Right?

They inform him that he is under arrest. Instead of taking him to a police precinct, they depart without explanation. The rest of the novel, to be honest, is a kind of confusing odyssey. Josef K. tries to find out why he has been arrested, but he's unsuccessful. He tries to learn about a limitless court that has evidently assembled a detailed dossier on him. But the court is secret. At the end of the tale he's apprehended by two officials in the middle of the night...and executed.

Isn't this, minus the search for understanding, what happened to Kevonte Martin-Manley? An otherwise stellar reputation besmirched, executed in the middle of night. Bam.

When I was in college this kind of reporting never took place. Ever. It was entirely too uninteresting. Too trivial. Besides, what wasn't seen firsthand was in a file, a paper file, in an office that was open only during normal business hours and sometimes not even that, and there would have been too much difficulty in even finding which office we're talking about in the first place. So as you can imagine, a paid journalist was very unlikely to drive down to the police station in Iowa City, and certainly not on a daily basis, and especially not in the summer, so he could read arrest reports in hopes of finding something newsworthy involving an athlete or any unsuspecting college kid. Today, as we all know, it's easily done in a bathrobe -- with espresso and biscotti in hand. What was once a truly tedious, laborious and likely empty-handed assignment is now efficient, painless and borderline nutritious. You can see why trolling the blotter is the new morning ritual.

Is my grievance generational? I'll leave that to you do decide. Although, it probably is. When I talk to late teen and 20-something employees of mine about privacy I'm met with an incomprehensible unconcern. I still use an alias at BHGP and have never (I don't think) mentioned my legal first or last name in a post; I might be increasingly rare in this regard although, to my delight, not everyone around here is eager to sign their real names to their comments. As far as I know I have nothing to hide, but I want to exert what little control I have over my identity nevertheless. I feel this is my right and there are psychological as well as real world benefits to being anonymous and in control of that anonymity.

VIMH: Especially when it comes to whining about the little things. Right chief?

Unsurprisingly I find it more and more difficult to use aliases on the Internet. It is increasingly more challenging to do so on YouTube or, as a smaller local example, the Gazette's website (where Morehouse, Dochterman and Hlas field comments to their blog entries), to name a macro and micro example.

When I've lamented the challenges of protecting my identity to my employees they laugh at my, as they view it, primitive angst. I've come to realize they are far more fascinated with a notion that is the very opposite of privacy: fame. They find enormous appeal in Facebook, Twitter, LinkedIn and the like because they are portals for others to peer INTO their lives, not shields or screens to regulate their privacy (despite the existence of privacy controls), and they tacitly approve the discovery of it all. As one employee put it to me, "Why would I want privacy? That's just a euphemism for isolation." What happens in Vegas no longer stays in Vegas, because it's eagerly going to be memorialized bit-by-bit by way of a myriad of selfies posted in tweets or on Instagram or a facebook check-in, recklessly (to this guy anyway) left to exist on the web forever. But hey, it means it happened.

VIMH: Hey Methuselah. You do realize no one younger than my mom still seriously uses facebook?

Breaking the law does not and should not automatically mean that you've opened yourself up to any form, even the mildest form, of public internet humiliation. First off, breaking the law is a matter of opinion. It is an opinion of the police and of the courts. It is an opinion we, as a society, should respect but it is not an opinion we should always agree with. It is an opinion we have the legal right to argue, if we choose to do so. Martin-Manley might have violated a local ordinance and he might not have. The front pages did not wait for his due process to conclude. They did not wait to see if he would even contest his citation in court. Nor did they wait to see if the police would drop their charges. Did they?

So Martin-Manley is now forever Googleable for two things: 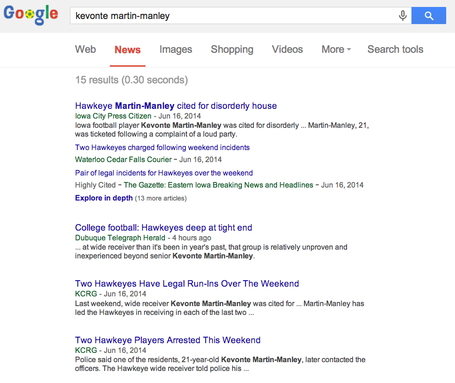 His football exploits and his recent criminal lapse in judgment. Like Josef K. he's powerless to this inaccessible authority and it's order has been decided.

I'll admit though, I wonder if Martin-Manley is nearly as bent about all this as I am?

"But the hands of one of the gentleman were laid on K.'s throat, while the other pushed the knife deep into his heart and twisted it there, twice. As his eyesight failed, K. saw the two gentlemen cheek by cheek, close in front of his face, watching the result. "Like a dog!" he said, it was as if the shame of it should outlive him."

--The final paragraph of The Trial