How is it that playing at Iowa can make a two-star recruit six times as likely to make the NFL? It's not just one thing. It's a lot of big things that get ignored.

Share All sharing options for: HOW IOWA RECRUITS STILL MAKE THE NFL, DESPITE BLUE CHIP DOMINANCE

Over at the mothership, SB Nation recruiting guru Bud Elliott put the numbers behind something that is becoming increasingly obvious: That recruiting rankings correlate with the chance that a player is eventually drafted.

Consider this: While four- and five-star recruits made up just 9.4 percent of all recruits, they accounted for 55 percent of the first and second round. Any blue-chip prospect has an excellent shot of going on to be a top pick, if he stays healthy and out of trouble.

For those who don't like percentages, here are some more intuitive breakdowns based on the numbers from the entire 2014 draft:

Bud is right: Being a blue-chip recruit makes it more likely that a player will make it to the NFL, and those writing that recruiting rankings don't matter have been contradicted by the overwhelming evidence across college and pro football time and again.

A BHGP-centric question remains, though: Why does that not apply to Iowa?  Because it really, really does not apply to Iowa.  In the last ten NFL Drafts, Iowa has had 38 players drafted.  The average Rivals.com star rating of those 38 players is just 2.76.  Fifteen of Iowa's 38 draftees were two-star recruits, and the chance of a two-star prospect getting drafted out of Iowa is barely lower than that of a four-star prospect (and actually better than a three-star):

While four-star recruits have a 50% higher chance of getting drafted than anyone else in the Iowa program, that's a far smaller gap than Elliott found nationally.  A two-star prospect has a one-in-34 chance of getting drafted nation-wide; at Iowa, his chances are one in six.  A three-star recruit is three times more likely to get drafted out of Iowa than he is from an average program.  And this is not a one-off phenomenon; it's been occurring for a decade, and the data above does not even include former walk-on Dallas Clark, two-star tight end Robert Gallery, two-star safety Bob Sanders or South Dakota option quarterback Chad Greenway.

So why is Iowa so good at taking modest-at-best talent and ushering it into the NFL?  Let's look at the possible reasons.

Here is a map of where Iowa got each of its draft picks since 2005 (because the archive of Rivals' star ratings go back to 2002, getting accurate data for anything before the 2005 Draft is prohibitively difficult): 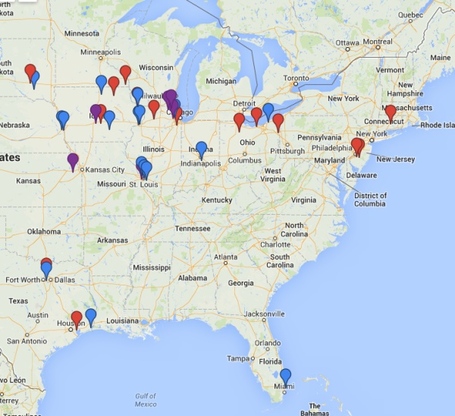 Two-star recruits are in red, three-star in blue, and four-star in purple.  That map looks a lot like a typical Iowa recruiting spread: Heavy on recruits from inside the state, the Chicago & St. Louis suburbs, and Ohio, with some movement in Texas and New Jersey.

This also isn't an atypical map for most Big Ten programs, but it's the kind of low-level recruits that Iowa is drawing from outside its immediate area that make that map interesting.  Iowa's three two-star draftees from Ohio are two defensive backs (Micah Hyde, Bradley Fletcher) and a running back converted to linebacker (Anthony Hitchens).  The East Coast recruits include a running back (Shonn Greene) and a cornerback (Amari Spievey).  Even in Texas, the two-stars are brought in for speed: Safety Charles Godfrey and wide-receiver-turned-tight-end Scott Chandler came to Iowa via the Lone Star State.  And so while many of Iowa's draftees have come at traditional "Iowa" positions like offensive line, tight end, and defensive tackle (see Factor 4), Iowa's two-star success has largely been built on cultivating speed from other areas, especially from players who are at other positions.  Which brings us to the second point...

Of the fifteen two-star Iowa recruits drafted between 2005 and 2014, nine changed positions while at Iowa:

That list highlights one of Iowa's primary recruiting secrets.  One, Iowa has a knack for locating and landing what Elliott calls "weight room warriors," guys who add a ton of muscle while in their college program:

Recruiting analysts and colleges must project a player to the college level, and part of that entails how much weight he can add to his frame. If a player appears to be maxed out, it can hurt his rating. On the other hand, a player with great length and a wide frame might be rated higher, because of his potential to add weight in a college strength program.

But that has its limitations, and the majority of undersized players with promising frames are unable to blow up in the weight room while still retaining the athleticism that got them noticed in the first place. College coaches and recruiting analysts would lose their jobs if they routinely projected every slender prospect to add the type of muscle these guys did.

And while Elliott is right for college football as a whole, the fact is that Iowa routinely takes undervalued "frame" guys and turns them into behemoths.  Of the nine players listed above, just two -- defensive backs Hyde and Godfrey -- did not add significant mass and move to a 'bigger' position while at Iowa.  He was rightly criticized during rhabdogate, but Chris Doyle has been the program's secret weapon for 15 years, and this is why.

The Doyle Effect is not just limited to two-star recruits, of course.  Of the 23 three- and four-star recruits who were drafted from Iowa over the last decade, seven were drafted at a new position.  But the bulk-up/position change phenomenon is not as prevalent as it is with the lower-rated recruits.

The list of Iowa draftees who changed positions highlights a second Ferentz recruiting secret: Iowa loves high school quarterbacks, even though many of them never take a snap for the Hawkeyes.  Chad Greenway, Micah Hyde, and Marvin McNutt were all high school quarterbacks who came to Iowa and ended up at new positions.  The same can be said for former New England Patriot Jeff Tarpinian, who was an option quarterback in high school, and former Montreal Alouette Derrell Johnson-Koulianos.  Playing quarterback at the high school level requires a football IQ that few other position need, an IQ that can be easily translated to other positions.  In some cases -- especially Greenway -- it also identifies you as the best athlete in a small school (Ferentz frequently does this with running backs, as well, due to the "best athlete" thing).  Those things are easily transferable to other positions.

Recruiting services have gotten significantly bigger and better over the last decade, to the point where it rarely misses pro-level talent in front of its nose.  Gone are the days where a small-school offensive lineman from Iowa or linebacker from South Dakota goes completely missed by all of the recruiting scouts.

But they're far from perfect, and the map shows where Iowa finds value.  Diamonds in the rough are hard to come by in Chicago and St. Louis, where everyone has been scouted thoroughly, but the same cannot be said for Iowa Class 2A football, rural Illinois, or (increasingly) the Northeast.  Whether there is actual inflation of recruiting grades in metropolitan areas and the Southeast is up for debate; four-stars out of Chicago make the league with an abnormally high frequency, just as they do out of Timbuktu, South Dakota, and the level of competition there arguably prepares them for the college football grind.  But the facts are the facts: Iowa has not had a four-star prospect in the NFL Draft that did not come from a metropolitan area, while the two-star draftees are scattered across the Rust Belt.

The Ohio issue is more complicated, but the three lower-regarded players from the Buckeye State were all ignored for being too slow (the three-star Ohio draftee, Ricky Stanzi, was just too patriotic to play anywhere else).  Ohio State and Michigan looked at them and saw no use.  Iowa saw value, and the previous factors are why that value exists: Iowa has found players who are undersized or a step slow for the big programs, filled them out or sped them up through rigorous training, and turned them into stars.  The recruit from Connecticut, Amari Spievey, is a prime example.  He was a high school star in Connecticut, but went largely ignored by big programs because his 40 yard dash was in the 4.6 range.  Iowa turned him into arguably the conference's best defensive back.  It gets that opportunity because Spievey was ignored, by both the major programs and the recruiting services, and Iowa was allowed to capitalize.

There is one further part of the low ratings that plays to Iowa's advantage: Ferentz has built a team of have-nots who want nothing more than to smash those programs that ignored them.  The 'Bullies of the Big Ten' thing?  That's largely because the bullies weren't picked to join Ohio State or Michigan, and use that as motivation when the big boys come around.  Bob Sanders was a guided missile fueled by rage at everyone who said he was undersized.  Micah Hyde used the slights from Ohio, Michigan, and everyone else as drive to get better.  Shonn Greene was a bad, bad man.

There is one reason inherent in the draft itself, as well: Iowa guys make really good late-round picks.  Hawkeyes talented enough to get into the first round are rare, and those that do are largely highly-regarded recruits to begin with.  Two of Iowa's last three first-round picks -- Adrian Clayborn and Bryan Bulaga -- were four-star recruits, and the third -- Riley Reiff -- was a four-star before dropping one level in his senior season.  All three were crown jewels of Iowa recruiting classes, and show that a combination of pure talent and hard work is still the best way to the top.

But Iowa guys make their living in the later rounds, when teams are looking for someone who can step in on the first day of camp and participate with a low learning curve.  And NFL teams know that Iowa players are familiar with the strength & conditioning program, well-versed in proper technique, and used to pro-style schemes.  They might not have the pure upside of others, but they'll be capable scout team players, if not more.

Iowa has become a program built on the development of overlooked players, first in size and speed and then in technique.  In doing so, it has become one of the NFL's primary feeder programs, and given those overlooked guys a chance to play football for a living.  It may not always translate to wins -- that's another topic entirely -- but it's hard to argue against the obvious fact: Iowa is the best NFL developmental program in the country at the moment.