WHERE DO IOWA'S PLAYERS COME FROM?

Share All sharing options for: WHERE DO IOWA'S PLAYERS COME FROM?

Benn Stancil, the chief analyst from Mode, put together an interesting research project lately, one that documents where DI college football players call home. He pulled the hometown data from the rosters listed on ESPN, did a little statistical analysis, broke things down county by county, and posted the results in the form of an interactive map.

He also ranked the programs in order of geographical diversity; the Ivies tended to be the most diverse, with Navy, Army, and Notre Dame being the only FBS programs to crack the top 10. (Which makes sense: Navy and Army attract individuals from all over the country who sign for reasons other than just playing football while Notre Dame has arguably the most truly national fanbase in the sport.) I certainly encourage you to spend some time poking around with the data in the map on his site. You can sort things by school or by conference, as well as by individual positions. (Mecklenburg County, North Carolina is a perhaps-unexpected hotbed for kickers and punters!)

In the meantime, though, here's what the map looks like for Iowa, as well as few of our local/neighbor state rivals: 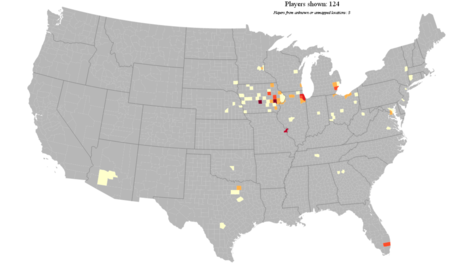 Per this map, Johnson County and Polk County produced the most talent on a per-county basis for the current Hawkeye squad, with 7 players apiece. St. Louis County, Missouri, wasn't too far behind, though, with 5 current Hawkeyes. Also: that big blob out west? That's Maricopa County, Arizona. Hi, Cody Sokol! 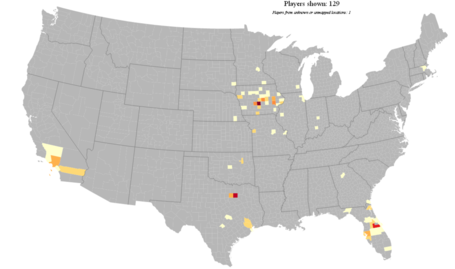 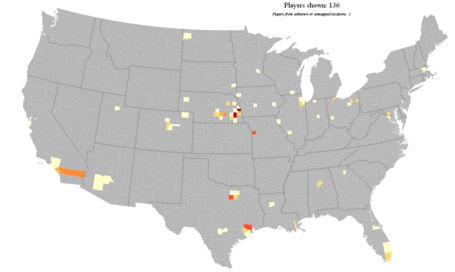 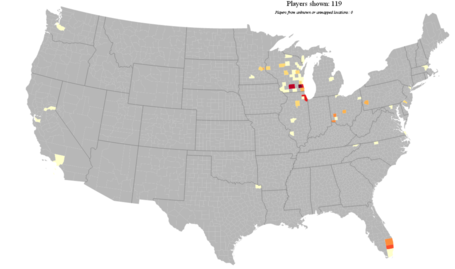 Wisconsin focuses on locking down their own borders (mission accomplished, it looks like) and then supplementing that with a smattering of national recruits (as well as a pretty strong focus in south Florida, a holdover of the Bielema days). Given their results over the last few years, it's hard to argue with their approach.

Again, go play around with the data on the interactive map that Stancil has posted. It's pretty interesting.