Share All sharing options for: Iowa-Northern Illinois: Breaking Down the Community Player Ratings

After Saturday's game against Northern Illinois, we debuted a new feature that we're going to experiment with at BHGP this year: Community Player Ratings.  As I said at the time, the concept is borrowed from soccer blogs like We Ain't Got No History and the idea is that it gives you, our community, an opportunity to rate the performance of the Iowa players and coaches.  I've tweaked the concept for use with college football; rather rank individual players (other than the QB), we're ranking position units.  It's just too much to rank every player.  Admittedly, there are some flaws with this approach, as I'll discuss during this breakdown.  983 folks provided their player ratings in this poll, which is a tremendous response.  Thanks, all.  So let's see what you all thought about Iowa's performance on Saturday... 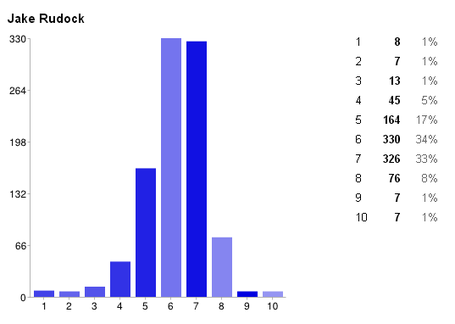 As you can see, it was a virtual dead heat between 6 and 7 for Rudock, which seems about right.  He made some very nice plays (especially in the second quarter, when Iowa's offense was humming), but he also had his struggles -- several incomplete passes in the second half and the terrible decision that led to the interception that set up NIU's game-winning field goal.  As debuts go, though, this was one wasn't bad. 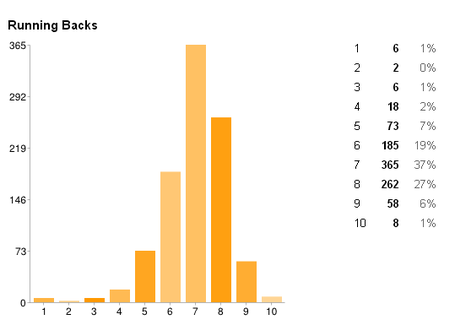 7 was the runaway winner here, with over 100 more votes than 8.  7-8 also accounted for over half the votes in this category; clearly, you thought that the running backs played well on Saturday, which seems accurate.  They had nearly 200 yards rushing and at times Iowa was able to control the game on the ground.  Their performance wasn't perfect -- Weisman's fumble led to points for NIU and Bullock's dropped screen pass in the second half denied Iowa a big gain on offense -- but overall they had good days on Saturday. 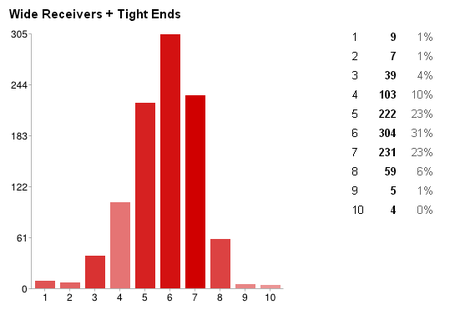 A little bit of dissent here, with 5 and 7 garnering strong support from you, but 6 ultimately comes out on top.  Admittedly, this is our first category where lumping several players together creates challenges.  KMM had a very fine day on Saturday and would probably rate higher than a 6-7 if rated by himself; on the other hand, Shumpert and Hillyer struggled on Saturday and would probably rate a big lower if rated by themselves.  But as an overall unit, 6 seems on point for them -- they made some good plays, but they weren't consistent and they had some costly drops for Iowa. 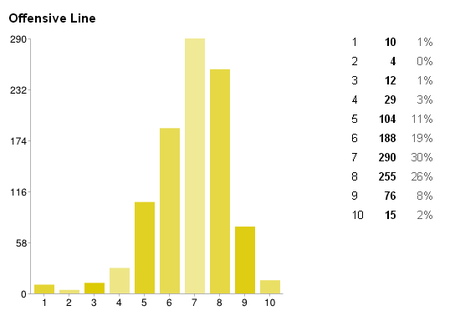 The consensus here seems to be 7-8, suggesting that the Iowa offensive line had a solid day on Saturday.  I would agree with that: when Iowa dedicated itself the run, they were typically successful, even when running into overloaded defensive fronts.  Rudock also wasn't sacked, which is certainly a credit to the offensive line.  But 7-8 also seems fair because they weren't perfect -- the interior of the line struggled to get a push at times and OG Jordan Walsh was blown off his spot and directly into Jake Rudock's arm, which led to an interception. 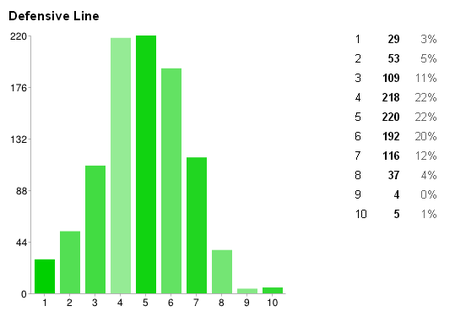 Not surprisingly, the ratings on the defensive side of the ball were less favorable.  We begin with the defensive line and somewhat divided opinions.  3-7 all garnered more than 100 votes apiece and 4-6 were within 30 votes of one another.  4-5 ultimately emerged as the consensus here.  That's probably fair if you consider their failure to get a pass rush (by design or not) to be a major problem with the defense on Saturday.  On the other hand, they did keep the NIU run game in check: minus the 42-yard fake punt, NIU ran for 146 yards on 41 carries an average of 3.5 yards per carry.   That's not stellar, but it's not awful, either.  So, really, 4-5 is probably about right for the defensive line on Saturday -- they weren't awful, but they certainly weren't hugely impressive, either. 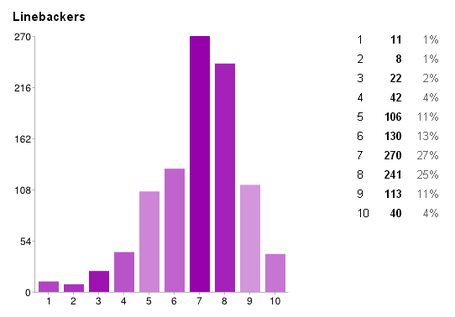 Unsurprisingly, the linebackers earned the highest marks among Iowa's defenders on Saturday, with 7-8 emerging as the top ratings here.  Going into the season, linebacker was expected to be the strongest area of Iowa's defense and that proved to be true on Saturday, with the linebackers being in the thick of most of Iowa's best plays (including the defensive play of the day, Kirksey's big hit, forced fumble, fumble recovery, and touchdown that seemed to spark the entire Iowa team late in the first quarter).  They weren't perfect -- Hitchens got burned on coverage on a wheel route on one of NIU's touchdown passes, Kirksey made a bad play on the fake punt, and Morris had a few missed tackles -- but for the most part they played very well on Saturday, which is reflected by their ratings. 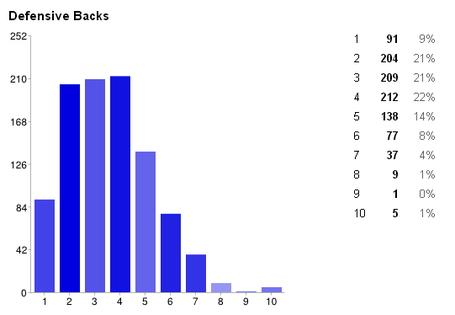 And we go from your highest-ranked position unit to your lowest-ranked position unit.  There were was a pretty steady  supply of 2s, 3s, and 4s here, which isn't too surprising given that the enduring memory of the game is likely to be the big pass plays that Lynch and his receivers connected on.  The whole point of Iowa's defense is supposed to be "bend, but don't break" and "don't give up the big plays."  By that standard, Saturday was a pretty dismal failure for the Iowa secondary.  The only argument I'd have for not raking the secondary over the coals (or at least raking them over the coals less) is that they were put in a difficult situation by Iowa's impotent pass rush; it's hard for any defensive backs to cover a play for several seconds, which is what they were often asked to do on Saturday.  But, ultimately, they had a poor day and the rating they received reflects that.

Also, 5 people gave this unit a 10?  Either some happy NIU fans voted here, or we found a few trolls. 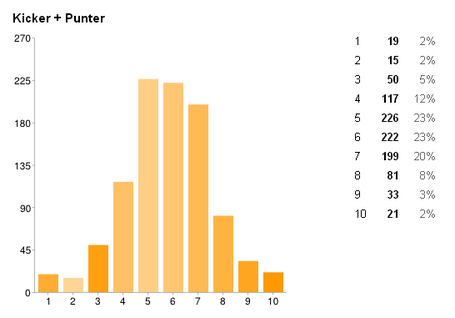 This is another unit where I think the rating might have been hurt by lumping together multiple players.  It's difficult to find too much fault with Meyer's performance Saturday: he drilled two field goals perfectly between the uprights, made all his extra points, and sent five kickoffs into the end zone for touchbacks.  By itself, that should probably be worthy of at least an 8 or 9.  But he was lumped in with Kornbrath here, who did not have such a fine day.  I think the main demerit here is that awful shank that led to NIU points, but he had a few other less-than-excellent punts.  A score in that 5-6-7 range (the most common selections here) is probably fair for Kornbrath, less so for Meyer.  Going forward, I think I'll separate kicker and punter into their own slots, since that only adds one additional slot to vote on. 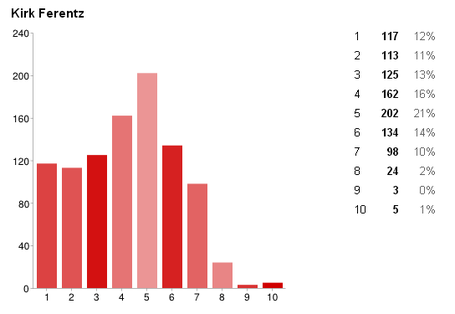 Honestly, I kind of thought this would be worse, given the circumstances (yet another close loss, yet another fake punt, yet another loss to a MAC team at home, seventh straight loss overall).  But 5, a score as middle of the road as it gets on a scale of 1-10, emerged on top here.  (For a while, 5 enjoyed an even larger advantage in this voting, which made it kind of look like Ferentz was giving us all the middle finger.)  But perhaps that's fair, too: I think people were generally pleased with the gameplan Iowa showed (maybe not so much in the second half) and the aggressiveness Ferentz displayed at times, but the fake punt continues to haunt him (even if the circumstances here were different than those found in the 2010 Wisconsin game) and there some puzzling decisions at times. 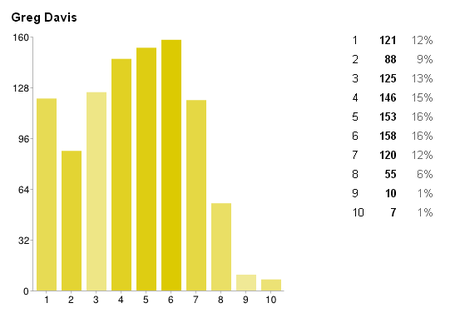 Ah, Greg Davis.  GERG himself got the most fascinating set of responses for Saturday's game because they were all over the map.  Six different categories (1, 3, 4, 5, 6, 7) received over 100 responses. 4-5-6 eventually became the most popular options, but 1, 3, and 7 had substantial support as well.  5-6 seems about right, because while the offense took definite steps forward (458 total yards offense, over 200 yards rushing, a more aggressive approach, and more shots downfield), it still had some definite problems (those yards only led to 20 offensive points, the offense was unable to sustain drives and/or score more than three points in the second half).  I suspect the Greg Davis ratings will be the most fascinating ones to watch on a week-to-week basis. 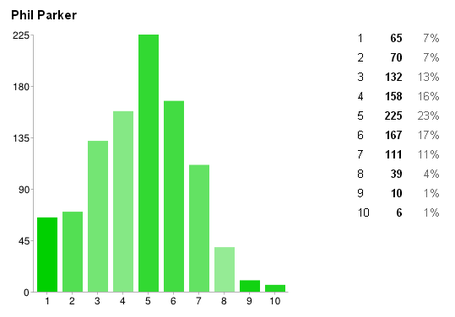 Like Ferentz, this ended up being a little but higher than I would have expected after the game.  5 became the top option here, which might be a little high, considering that Iowa's defense gave up 30 points at home to a MAC opponent for a second-straight year, the pass rush was still anemic, and the defensive secondary had multiple ugly breakdowns in coverage.  I thought it was a below-average showing for Iowa's defense on Saturday, personally.

Anyway, there we have it -- the first use of Community Player Ratings here at BHGP?  Like I said above, I'm very pleased with the response and I'm going to continue to tweak things a bit.  What suggestions do you have?  You are, after all, the community.  What did you like?  What would you recommend changing?  I'm open to your ideas.