Share All sharing options for: Iowa-Western Michigan: Breaking Down the Community Player Ratings

Well, these ratings should be fun to look at, coming off the biggest win for Iowa in five years.

Incidentally, turnout was down considerably this week, which I blame on myself -- I should have gotten the voting form up sooner than Sunday evening.  Mea culpa.  Anyway, on to the ratings... 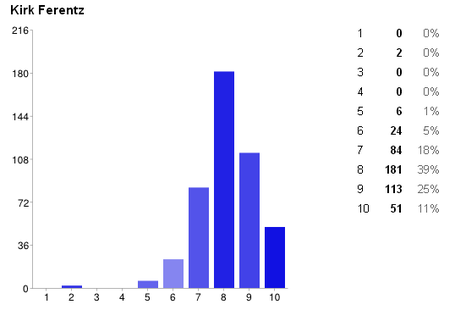 Ferentz's rating among folks has been ticking up week by week, and a totally dominant, 56-point win unsurprisingly brought him his best rating yet this season, with a healthy amount of 8s and 9s.  Honestly, I think it will be tough for Ferentz to improve on this rating, unless he can engineer an Iowa upset in the Horsehoe or in Lincoln. 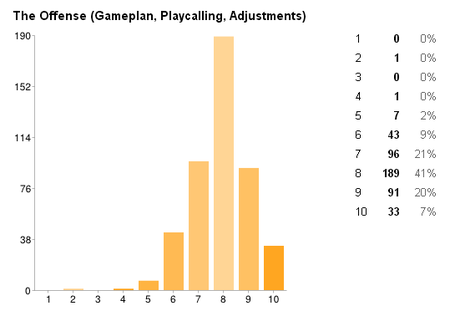 Now this graph looks like Greg Davis is flipping us off -- "How you like me now?!"  (I even detect a little Texas burnt orange in the colors; oh, Google Docs, you sly dog.)  Of course, Davis can only claim credit for 31 of Iowa's 59 points in the game; his unit wasn't responsible for KMM's punt return scores or Lowery's pick-sixes, after all.  But it ended up being another solid day for the Iowa offense, with another 400+ yards of offense (including 250 on the ground), some big plays in the passing game and quite a bit of scratching where it itched.  My grumbles would mainly be limited to the first offensive series (when 7 plays beginning at the WMU 22-yard line failed to result in an Iowa TD) and a few punts. 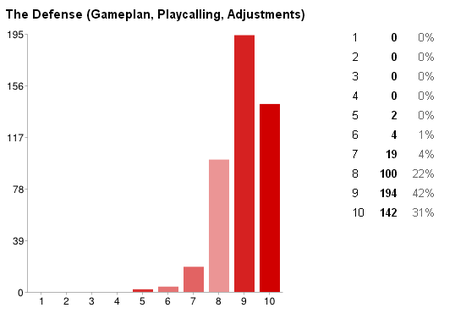 Very strong scores for the defense, with 9s and 10s carrying the day by a pretty solid margin.  It's hard to complain about the defense after this game, though: they forced Western Michigan into six straight three-and-outs to start the game and then, when they got bored of that, they decided to just start scoring themselves; B.J. Lowery took a pair of interceptions to the end zone right before and right after halftime.  Iowa's second-stringers helped WMU put up a hair over 200 yards of offense (and looked a bit vulnerable to screen passes to running backs) and Iowa again failed to record a sack (although they were able to get pressure on WMU; see below), but for the most part this was a truly excellent effort by the defense. 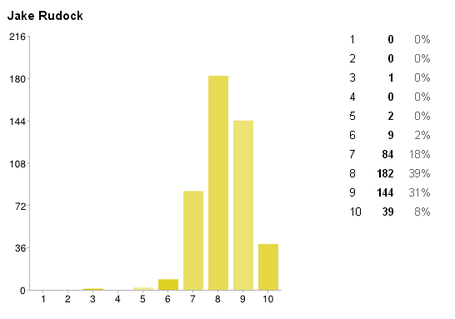 I think I screwed up here.  In my haste to finally get the game recap and poll up, I neglected to revise this category to account for the fact that for the first time since 2011, Iowa actually played TWO quarterbacks.  In the same game, no less.  So  this rating probably doesn't accurately account for C.J. Beathard's performance last Saturday, unless people just treated this category as an all-purpose QB category.  Anyway.  It was a fairly quiet day for the Iowa passing game on Saturday; the defense and special teams were scoring touchdowns for fun and after a slightly sputtering start, the running game really got rolling against WMU.  But Rudock did complete 2/3 of his passes, kept several drives humming along with key completions, and threw a beautiful TD pass to Damond Powell to end his day.  He also scored Iowa's first TD of the day with a TD pass to Jacob Hillyer, which helped ease any nerves Iowa fans might have had about this game.  Both Rudock and Beathard were also effective on the ground -- and would have had several more yards, to boot, if not for an inadvertent whistle and some untimely penalties.  Also good news?  For the first time all season, Rudock didn't turn the ball over. 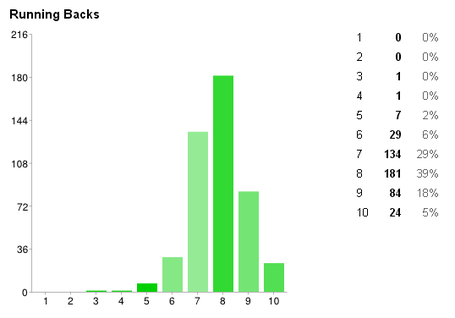 While several units posted season-best ratings this week, the running back crew did not.  They didn't score badly -- lots of 7s and 8s -- but it wasn't their best mark of the season.  The running backs did rack up over 200 yards rushing and a pair of TDs and effectively allowed Iowa to play keep-away in the second half, but they also put the ball on the ground twice (once in the red zone and once immediately after the Iowa defense had forced a turnover) and they failed to very many explosive running plays, despite playing against perhaps the worst run defense they'll see all year.  Still, all in all, we'd take a performance like this pretty much every week and it was good to see the carries get spread around several backs. 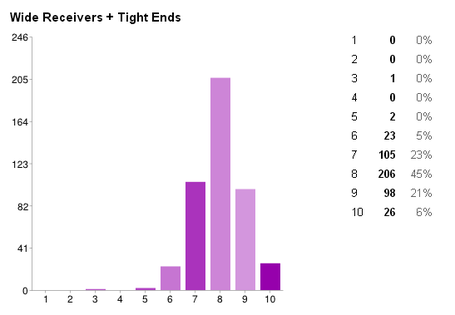 The halo effect of a 59-3 win seems to have certainly benefited Iowa's receivers and tight ends; 8 was the runaway top score here, even though Iowa's receivers combined for 9 catches and 167 yards on Saturday.  That was a good day for Marvin McNutt by himself a few years ago.  But lack of opportunity had something to do with that -- Iowa only put the ball in the air 18 times on Saturday.  There also weren't any egregious drops among this crew and they also had a pair of touchdowns -- one (by Hillyer) that seemed to open the floodgates for the scoring to come and one (by Powell) that served as the cherry on top of Iowa's blowout sundae.  Speaking of Powell... it was exciting to see Iowa go back to him a few times on Saturday; his speed is truly the sort of weapon that Iowa just hasn't had in the passing game for a long, long time. 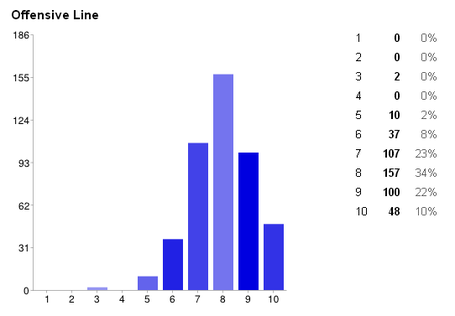 A solid 8 for the mashers up front, which is probably reasonable when Iowa racks up over 250 yards on the ground and dominates time of possession (TOP) again, and when Jake Rudock doesn't get sacked.  (He was rarely under much pressure all day, in fact.)  I think there are things this unit needs to do in order to go from being a good unit to an excellent unit -- they need to be more consistent in pass blocking (especially in the interior) and they need to do a better job of getting to the second level in run blocking (which would likely help Iowa get more explosive plays in the run game) -- but they're still playing well. 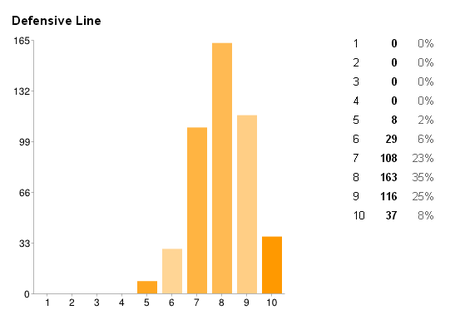 Defensive linemen only recorded 10 tackles on Saturday (and no sacks), but they still had arguably their best performance of the season.  Drew Ott forced a fumble and Alvis, Meier, and Davis all recorded QB hurries and the overall pressure on the QB was better than we've seen all year.  They flushed him out of the pocket on multiple occasions and forced him into several errant throws on the run.  As always, there's room for improvement from this unit, but this was a good performance for them to hopefully build off of for the rest of the season. 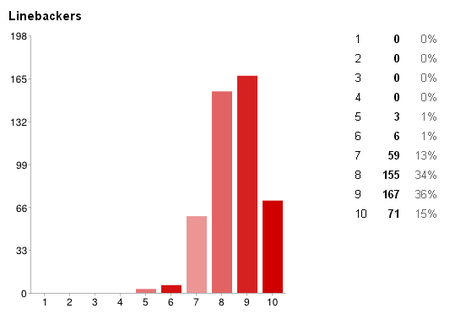 Iowa's linebackers are good.  The end.  But seriously... it was very encouraging to see the linebackers able to get so much effective pressure on the QB in this game, given that the defensive line remains a work-in-progress in that department.  Kirksey, in particular, was an absolute beast on blitzes.  He didn't record any sacks, but he got excellent pressure and delivered a few punishing hits.  And while Iowa will definitely miss the Morris-Kirksey-Hitchens trio next season, I like what their replacements (Alston, Spearman, Collins, and Perry) bring to the table and I thought they played well in relief on Saturday.  Although Spearman definitely needs to get acquainted with Chris Doyle this off-season; he was maybe the skinniest LB I've ever seen out there. 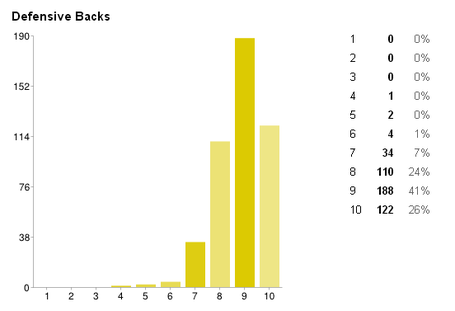 Good god almighty, the most popular ratings for the Iowa secondary were 9 and 10.  For a game in 2013.  I can honestly say that I did not expect to see that at any point this season, given the way the season started.  But they certainly had a good day on Saturday: Lowery's play gets the highlights and (deserved) plaudits, thanks to the two pick-sixes, but I thought the entire defensive backfield looked pretty solid.  Miller came up with an interception in the end zone (admittedly, an incredibly easy interception, given that it looked like the WMU QB threw a pop fly right to him) and delivered a crushing hit to a tight end earlier in the game.  Iowa avoided giving up any big pass plays for the first time all season (WMU's longest-gaining play was a 19-yard screen pass) and forced several turnovers.  No complains about this unit from me. 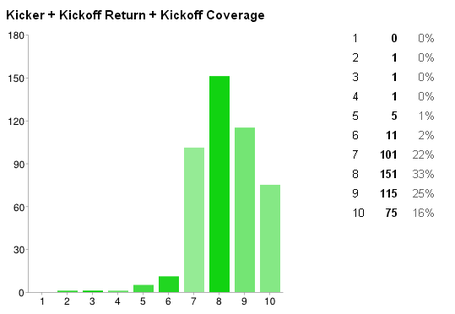 Meyer was perfect in the kicking game, although if you wanted to quibble with one thing about his performance, it would be that only 33% of his kickoffs went for touchbacks.  That's relevant because the kickoff coverage is still a little inconsistent.  It was very good on several kickoffs (including the opening kickoff of the game, where Marcus Collins delivered a tone-setting hit), but broke down a couple times and led to 30+ yard returns.  Until Iowa can eliminate those coverage breakdowns, the best play in kickoffs is probably for Meyer to just boot the ball as deep into the end zone as possible.  Iowa had a strong day in the return department themselves, though; Cotton was one ankle tackle away from joining Martin-Manley and Lowery in the return-play TD fun and up-back Macon Plewa surprisingly had the longest return of the game (36 yards!).  Maybe we should put him back there... (No.) 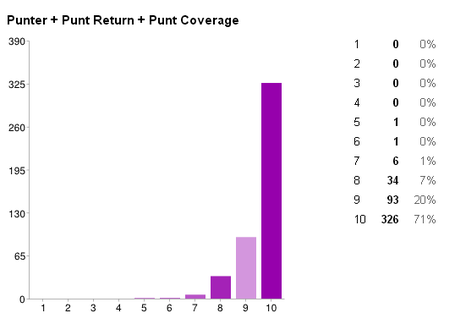 And we end this feature with the best rating of the day: a landslide of 10s.  Well, we always did say punting was winning, right?  But, no, while Kornbrath had himself a perfectly fine day kicking the ball (his 47.0 per-punt average was easily his best of the season), there's one big reason why the ratings are so high here: KMM returning back-to-back punt returns for touchdowns in the second quarter.  No Iowa player had never done that before (and don't hold your breath waiting for it to happen; seriously, don't do it -- you will probably die) and, hell, not many players from any team have ever done that before.  (Maybe none, honestly.)  Iowa hadn't returned a punt for a touchdown since 2008 (Andy Brodell vs. Iowa State); in the span of about 10 minutes of real time, KMM gave Iowa two punt return touchdowns already this season and broke this game wide open.  So yeah: the punt game was definitely winning for Iowa on Saturday.