Share All sharing options for: Iowa-Iowa State: Breaking Down the Community Player Ratings

Surprising news, guys! A dominant (well, mostly) win over a hated in-state rival gets people happy and boosts ratings for coaches and players! I know, I know -- I was pretty shocked to discover this bold truth, too. On to the ratings! 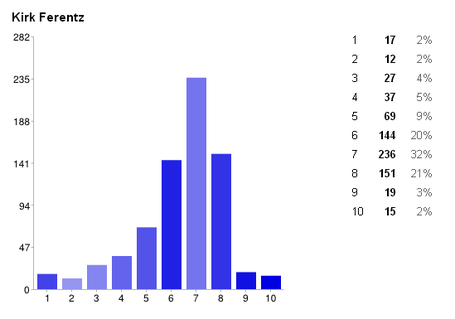 A pretty solid 7 for Ferentz this week; it's hard not to think that it would have been a bit higher had Iowa's pass defense not been flambéed and had Iowa State not recovered one of their two onside kicks in the final seven minutes of this game. Because for about 53 minutes, this was looking like a pretty damn convincing -- and dominant -- win for Ferentz over an opponent that's given him no shortage of grief in his 15 years at Iowa. Alas, games are sixty minutes long, not fifty-three, so a 7 is probably about right for Ferentz this week. 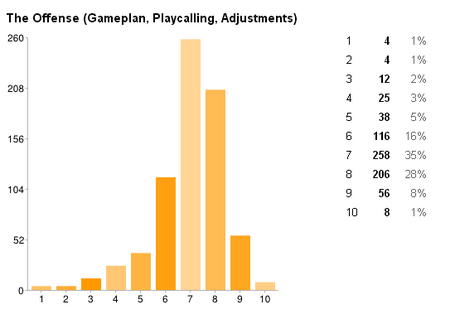 Lots of 7s and 8s for the offense this week; maybe that Greg Davis fella is on to something after all... The offense is still having a bit of a problem converting yards into points (Iowa dipped below 400 total yards of offense this week, but not significantly -- 378 yards) and once again failed to crack the 30-point barrier. But the offense was still brutally effective -- emphasis on "brutally," given the 60 runs Iowa had in this game. In the second half, Davis seemed to ditch anything remotely cutesy on offense and embraced a "scratch where it itches" (read: run it up the gut again and again and again and again... and then run it again if the defense still can't stop it) mindset so fully that even Hayden Fry would have been proud. There are still kinks to be worked out on offense, but overall things are looking better than they did a year ago -- the trick now is maintaining that improvement once we hit Big Ten play. 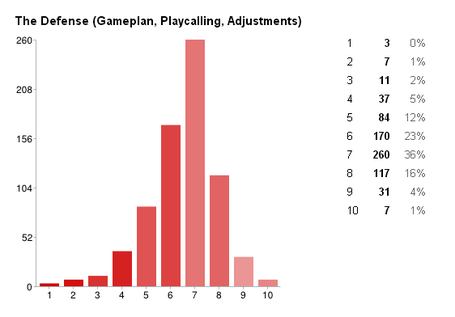 A strong 7 for the defense; like Ferentz's rating, it's hard not to suspect that this rating would have been a bit higher if Iowa hadn't gotten quite so meltdown-y in the last few minutes of the game. Unfortunately, they did get meltdown-y (I had the heart palpitations to prove it) and we can't ignore that. But they really did play well before that. Iowa State certainly has issues on offense, including a badly beaten-up offensive line (Iowa was really able to make hay against the Cyclones' third-string center), a dinged quarterback, and some odd playcalling (psst, the weakness of Iowa's defense is in the deep secondary, not the middle of the defensive line), but Iowa still did a great job of stoning them for the better part of three quarters. Iowa State didn't crack 100 yards of total offense until the third quarter -- that's a nice accomplishment, regardless of the opponent. 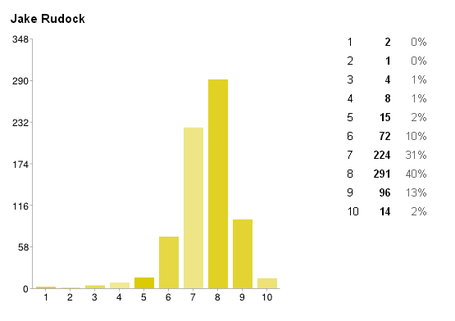 As Snr. Jacobi noted in The Takeaway, Rudock completed a game without throwing a crippling fourth-quarter interception! Huzzah! Hell, he completed a game without throwing any interceptions! He wasn't completely turnover-free -- witness a pair of fumbles (one lost) -- but progress is being made. It wasn't a spectacular day, stats-wise, for Rudock, but he looked confident and poised on his first road start against what figures to be perhaps the third-rowdiest road crowd he'll see all season (West Lafayette will likely be half-empty by the time Iowa arrives in November and I have my doubts about the Minneapolis crowd next week being as heated as the Ames crowd was last weekend), which is encouraging. His stats were also hampered by factors outside his control: drops in the first half, a dedication to a (punishingly effective) run game in the second half. But he was able to make some key plays for Iowa through the air, including a beautiful pass on the run to Tevaun Smith that set up Iowa's first touchdown of the game (itself a smart pass play to KMM) and a huge touchdown pass on third down to Jacob Hillyer immediately after Iowa State had scored their own touchdown and cut Iowa's lead to 13-7. 8 was the most popular rating for Jake's performance against Iowa State, and while that might look a bit high against his raw numbers, I don't think it's too unreasonable given the circumstances of the game. 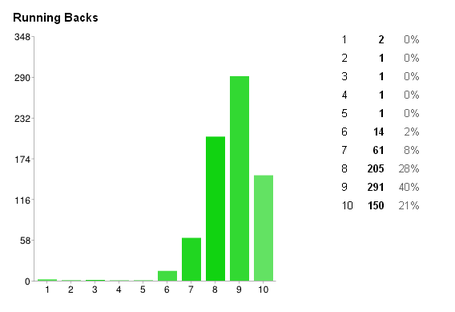 Y'all were very happy with the running game, rating it almost exclusively 8, 9, or 10. And I am certainly not going to dispute that after Weisman and Co. mauled Iowa State up and down the field on Saturday night. My two quibbles would be that Iowa wasn't able to break any long runs (the longest of the day was a 13-yard run by Weisman) and that Iowa wasn't able to pick up first downs on the ground late in the fourth quarter, when doing so could have enabled Iowa to run out the clock and post a very comfortable win. Still, those are minor complaints; when the running game is able to put together drives like it did in the third and fourth quarter, where Iowa methodically mashed its way down the field, almost exclusively via the running backs, well, I'd say things are working pretty damn well. 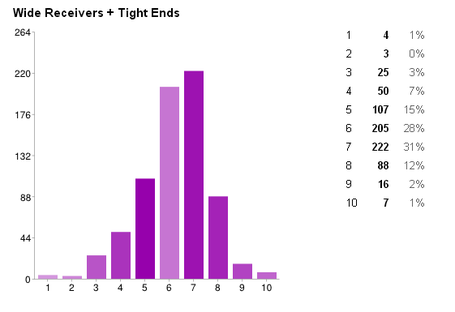 Lots of 6s and 7s for this group, with the drops in the first half likely deflating their rating a bit. KMM bounced back from a quiet game last week with another strong performance here, though; Hamilton made a few very solid grabs (and was a valuable presence in the run-blocking game, too), and Hillyer had an excellent catch-and-run for the game-winning touchdown. Improved consistency is still desperately needed here, but there were signs of progress from the wide receivers and tight ends this week. 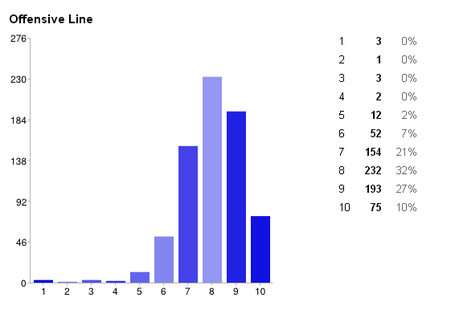 As we saw in the running game, there are a ton of 8s and 9s here, which is hardly surprising; Saturday's performance was not one where Weisman was gaining all those yards on his own -- he had a great deal of help from the maulers in front of him. They opened gaping hole after gaping hole for him and were a key factor in Iowa's grinding, run-heavy drives down the field in the second half. Again, there were some flaws, too -- the failure to overpower the Iowa State defensive line late in the fourth quarter and allow Iowa to run out the clock on the ground, the tendency of the interior line to let defenders pressure Rudock -- but the offensive line did a lot of things right on Saturday and their ratings certainly reflect that. 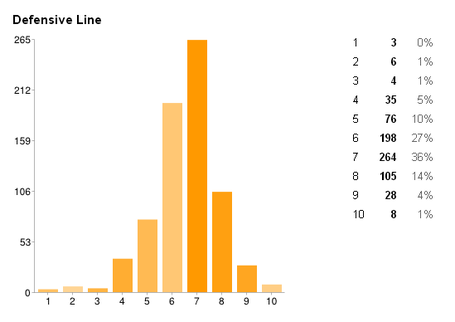 The headline story for the defensive line on Saturday may have been that they finally recorded a sack in the 2013 season (via Darian Cooper), but the real story was the fact that they were able to generate considerably more pressure on the quarterback in this game than they had in the previous two games. The defensive linemen were credited with four QB hurries on Saturday and there were a handful of other plays where they were able to get pressure on Sam B. Richardson, too. Obviously, caveats apply: Iowa State's offensive line is not great (and it got even worse when they were down to their third-string center), Richardson was hobbled (making it easier to pressure him), and the defensive line wasn't able to get much pressure in the fourth quarter, when Iowa State was able to put together a run. Again, though, this was a solid showing by the defensive line -- the trick now is to build on it in upcoming games. 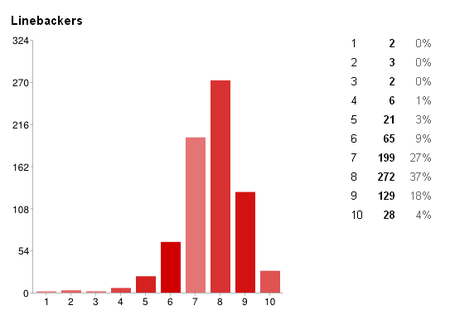 Another week, another highest rating on defense award for the linebackers. Like I said last week, I'll be shocked if the linebackers aren't the highest rated unit on this side of the ball season; Iowa's three best defensive players are all linebackers. Hitchens and Kirksey led the way in terms of tackles, while Morris came up with the big play this week, snaring an interception off a tip shortly before halftime, which set up an Iowa field goal. 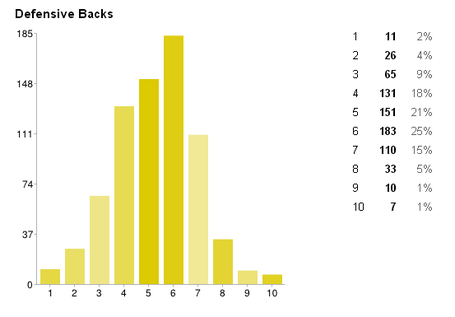 Another relatively rough outing for the secondary, with a heavy dose of 4s, 5s, and 6s for this unit. This is yet another unit that was likely headed to a higher rating before the final seven minutes of the game, but that's how it works sometimes. And in those final seven minutes, the secondary's tendency to get burned (and burned badly) reared its ugly head again. On the bright side, goddamn did B.J. Lowery have himself one hell of an interception in this game. I suspect that plays like that are why teammates and coaches have been high on his ability at CB for a few years now. 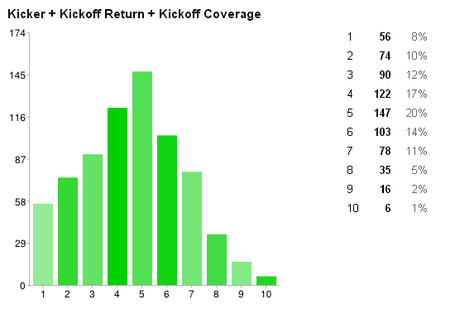 The good news? Meyer converted all of his field goals and extra points and Jordan Cotton had one solid return. The bad news? Meyer only had two touchbacks and Iowa State got good returns on virtually all of his other kickoffs. Oh, and there was the little matter of that onside kick that the Cyclones recovered, too... Five carried the day here, barely, which would seem to imply that the rest of you thought it was a pretty up-and-down day for the kicking unit on Saturday. 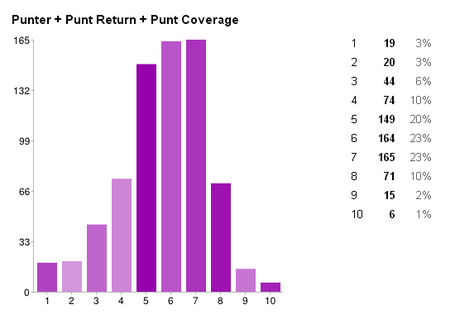 Basically a dead heat between 6 and 7 here. Kornbrath had a solid day punting the ball and managed to avoid any horrible shanks, although the return game probably swung slightly in Iowa State's favor here. KMM didn't return a single punt on Saturday, while Iowa State's returner (Jarvis West) had a pair of 8-yard returns. It was a fairly punt-happy game last weekend (both Iowa and Iowa State punted six times), with both teams seeming to punt well in the game.

And that's this week's ratings in the book; come back next week to see how the community felt about Iowa's game against Western Michigan..