Scoreboards, Ribbons, and Walls of Honor, Oh My! Breaking Down the Kinnick Stadium Changes

Ch-ch-changes are coming to Kinnick Stadium.

Share All sharing options for: Scoreboards, Ribbons, and Walls of Honor, Oh My! Breaking Down the Kinnick Stadium Changes

Unless you've been living under a rock for the last few months, you probably know that Iowa has been making several changes to the look and feel of Kinnick Stadium this off-season.  Thanks to Friend of the Pants Marc Morehouse, we now have a better grasp of just what the new scoreboards (as well as the just-announced Wall of Honor) at Kinnick are going to look like.

All pics courtesty of Morehouse's Instragram or Twitter feeds, unless otherwise noted.

First up, the new and improved scoreboard in the South endzone:

South videoboard is 60 percent bigger. There still will be ads. Not sure of ratio. 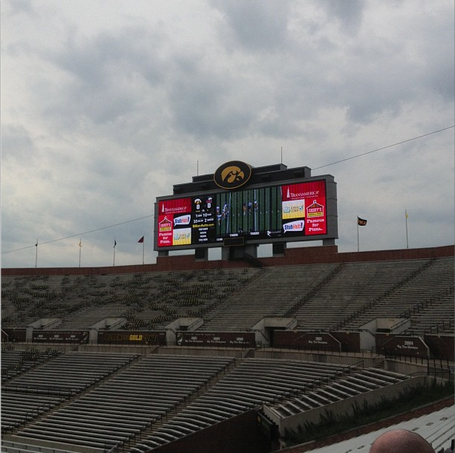 That's... a lot of ad space.  But, hey, Casey's helps pay the bills.  On the bright side, the image on the screen can (and will) expand to fill the entire screen at times: 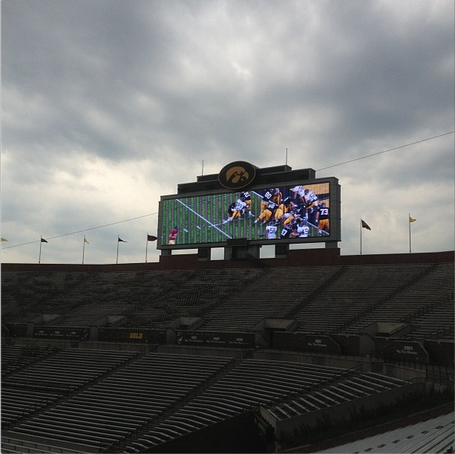 As for how often images will expand to fill the screen... probably not that often.

@hasselESPN It will expand, but only for celebration-type plays and a few other situations. Iowa has to sell every inch. It's not Michigan.

Next up, the new "ribbon" scoreboard in the North endzone:

And a closer view: 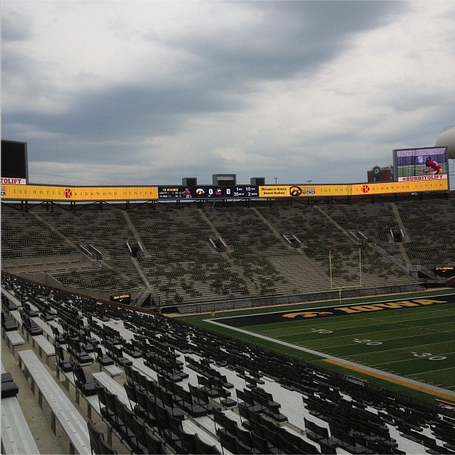 Our own PSD also has a Vine of the new ribbon scoreboard:

Generations from now, our children's children will ask us what a "BURRITOLIFT" was and why we cared so much about it.  We will hang our heads in shame.

Finally, we also got a glimpse of what the Wall of Honor is going to look like: 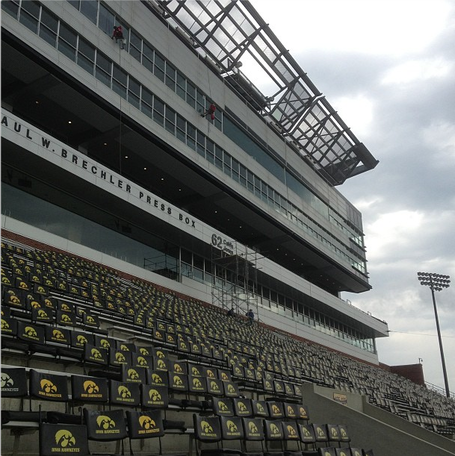 As announced two days ago, the UI is going to honor nine legendary former players on the Paul W. Brechler Press Box.  The players' names and the jersey number they wore at Iowa will be placed on the lowest ribbon of the press box, as seen above. The nine players that will be a part of the initial class include:

The UI also announced the inclusion criteria for placement on the Wall of Honor:

To be considered for inclusion on the Kinnick Stadium Wall of Honor, former UI football players must be a member of the UI Varsity Club Hall of Fame, and meet one of the following three criteria: 1. Member of both the National Football Foundation College Football Hall of Fame and the Helms Athletic Foundation Hall of Fame* 2. Member of one of the two above mentioned nationally recognized Halls of Fame, and a consensus All-American 3. Two-time Consensus All-American

Honestly, I think this is a great idea.  Just a week ago, I was writing about the need for Iowa to do more to honor the legacy of Calvin Jones, an all-time Iowa great; little did I know that something like this Wall of Honor was just about to be announced.  As I said then, Kinnick's legacy is well-enshrined at the stadium, but there are other great players who deserve to be acknowledged and remembered as well.
A Wall of Honor prominently located within Kinnick Stadium and easily visible to fans attending a game seems like an excellent way to commemorate these legendary figures, too.  There's a certain slippery-slope argument that could kick in when you start erecting statues for figures other than Kinnick and while statues are great, I'm not sure we want to turn the area in front of Kinnick Stadium into a statue garden, either.
All nine individuals chosen for inclusion on the Wall of Honor are certainly worthy (which is probably a given, considering the stringent inclusion criteria the UI has set up for the Wall of Honor) and if you're not familiar with a few of them, I encourage you to do a bit of research and see just why they were such great players.  Devine, in particular, was basically Kinnick before Kinnick existed -- he led Iowa in passing, rushing, and scoring each of his three years at Iowa.  Also, he did this to Minnesota, which might warrant his presence on the Wall of Honor by itself: