Did You Know Iowa's Cal Jones Was the First College Football Player to Appear on Sports Illustrated?

Diving into Iowa's past to remember a legend of the game.

Share All sharing options for: Did You Know Iowa's Cal Jones Was the First College Football Player to Appear on Sports Illustrated?

You probably didn't know that, right? I know I didn't. But it's true:

And the cover in question: 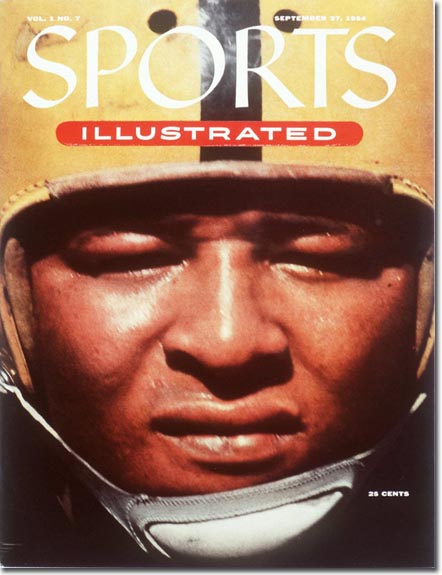 In part, Calvin Jones' distinction as the first college football player to ever appear on Sports Illustrated is a function of logistics. SI debuted on August 16, 1954; Jones appeared on the cover of the September 27 issue that year, the seventh-ever issue of SI. September 27 was near the beginning of the college football season, too, so there weren't a ton of opportunities for college football players to appear on the magazine cover before Jones. Although it may also be worth noting that no other college football players appeared on SI after Jones in 1954. Of course, the range of sports that could appear on the cover of SI in those days was much broader than it is today: in its first few issues, SI featured auto racing, yachting, swimming, golf (or at least golf bags), rodeo, and "outdoor recreation." They even put a guy from the marching band on a cover. And a dog with a pheasant in its mouth. And a painting of a duck. Look -- it was a different time, okay?

But the fact that Calvin Jones was on the cover of Sports Illustrated should also serves as a reminder that Calvin Jones was really, really, really damn good -- something that we, as Iowa fans, probably don't remember enough. Jones was a first-team All-American in 1953 and a consensus first-team All-American in 1954 and 1955. He earned that honor in 1954 despite playing with a broken wrist for the entire season. In 1955, he won the Outland Trophy -- the first African-American player to do so. He also finished 10th on the ballot for the Heisman Trophy that year. As an offensive guard. On a team that went 3-5-1. He was an amazingly gifted player, one of the greatest to ever suit up for Iowa. He's the only player aside from Nile Kinnick to have his number (#62) retired by Iowa and while (like Kinnick) his tragic death at a young age (he died in a plane crash in 1956, while on his way to watch Iowa's first-ever appearance in the Rose Bowl) probably played a role in that decision, it's a well-deserved honor in light of his excellence as a player; he's the only Iowa player to ever be named a first-team All-American three times.

And yet despite his excellence, he's a player that few people today know much about. Should the University do more to honor his history at Iowa? Yes, they retired his number, which is indeed an immense honor. But the only other player to receive that honor, Nile Kinnick, has the stadium named after him, a statue in his likeness guarding one of the entrances, and a clip of his famous Heisman Trophy acceptance speech plays before every game. It's impossible to attend an Iowa home game and not be reminded of Kinnick's greatness at every turn. And that's fine -- I have no desire to diminish Kinnick, his accomplishments, or his legend.

Jones may not be Kinnick's equal as a player or as a figure of mythic lore in Iowa's history, but he's still a titan of Iowa's football past. There are few reminders of Jones' Iowa tenure on a fall game day at Kinnick -- and that seems kind of wrong. I don't know what the solution to that is -- a statue? a plaque? a clip (or even a still photo or two) of his playing days that runs during the introduction? -- but it would be nice if Iowa could do a little more to honor one of its all-time greats and to educate fans about a player who ranks high in the pantheon of Hawkeye football legends.