It's Media Day, let's talk about it.

This is a blog post updated throughout the day with links, tweets, pics and videos from media from the Big Ten media day in Chicago. We did this last year, if you're confused here's a link to refresh your memory. The timeline will update frequently, so check back or refresh often.

NOTE: We mods will try our best to keep the timeline full of interesting, Iowa and the absurd. We will, at times, take breaks. So please, commentariat, keep the ball rolling. We will update as time permits.

6:48 AM Iowa released their fall two-deep

8:55 AM Players are available both today and tomorrow. Here is the complete list

9:00 AM There's a rumor on Rivals that Iowa may have lost a scholarship wide receiver. We'll have to wait for Ferentz to learn more.

10:04 AM Pat Fitzgerald starts things off with a lot of "blah, blah, blah"

Fitz: "Entire offensive line is heathy coming off the spring and going into Camp Kenosha. There will be great competition among that group."

Take an inside look at the Grand Ballroom at the Hilton Chicago prior to B1G Football Media Days: http://t.co/cNZ1U1rJNJ

Northwestern coach Pat Fitzgerald on targeting penalty: "If you're defenseless you should be protected" #B1GMediaDay

10:18 AM Purdue's Hazell wants to bring Purdue from the middle to the top, whatever

Hazell on starting QB: "We have a nice QB going on.' Purd has a SR and a FR. Both will get 'equal' reps. Will name starter 2 weeks into camp

10:31 AM Gary Anderson walked into a program that isn't broke

10:33 AM Anderson wants to recruit nationally at Wisconsin because he believes they can

Andersen on the QB battle: "It's a 3 man battle right now, sat down w/ all of them and gave a clear vision of where it's going."

10:37 AM Anderson believes Chris Borland is the best linebacker in the country

11:14 AM Beckman: Nathan Scheelhaase is our starter at quarterback

Indiana's Kevin Wilson: "Our long snapper is a big-time player."

11:18 AM Wilson: We are unsettled at QB. They are still looking three players

11:20 AM Wilson says Indiana's defense has been embarrassing the last two years. It's time to take a step up.

Darrell Hazell on Taylor: "Brandon probably won’t be with us this year. All I can say is it’s some academic stuff he’s working toward"

11:37 AM Get your Ferentz PC Bingo Cards. The Only Bingo game where everybody wins! 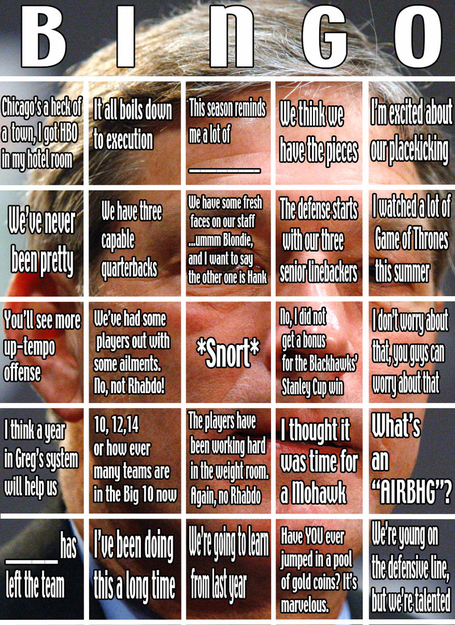 12:04 PM Pelini asked about blowout losses, says it's not about scheme but execution

12:05 PM Pelini on why Thomas Brown was dismissed from team: "violation of team rules"

Targeting: "it's the application part of it, can be very subjective. Going a little bit overboard".

12:10 PM Pelini: "We can potentially have a very potent offense"

"Our QB position is much stronger this year than it was last year." - Dantonio

12:22 PM Dantonio: "Wisconsin is pretty close to Michigan if you look on a map"

"I have not received the good news about Hyde, I guess I'm not a big social media guy. I need to evaluate the facts"

"There was certainly no intent to go after Florida, that's all I can tell you." Meyer on OSU turning in the Gators

12:40 PM Meyer: "I want to make sure our punishment is harder than anyone out theres"

#Gophers coach Jerry Kill on the bowl game in 2012: "We played more like we want to play at Minnesota, very physical, hard-nosed football."

James Morris does an interview with Fox in Chicago. #B1GMediaDay pic.twitter.com/aRvHph90HE

1:29 PM KF: "Last season was disappointing for us, certainly"

ISU schedule ?: We're firmly locked in with ISU. Important, relevant game. Don't see it ending in the near future.

KF on hurry-up and injuries: Don't know the data. It's become popular. Have to be prepared for it.

Kirk on RB: Hard to feel too good or too comfortable at any one position.

Ferentz said Morris and Lomax had appendicitis issues in last few weeks but both will b ready to go on first day of practice. #hawkeyes

No official announcement on Iowa WR Cameron Wilson. KF said the final roster is when something could be announced.

WR Damond Powell "still finishing up his work" with regards to qualifying. Iowa expected things to come down to wire. "We knew that."

Delany thinks there's a chance at NCAA structural changes within a year.

2:47 PM All of the coaches' transcripts including Ferentz

#qctimes Delany said he views the stipends as something for athletes who are on full scholarship, men and women.

Well, that concludes the press conferences. Delany's speech was long-winded but extremely informational. I'll post the transcript above here when it's available. These rest of the news, if any, will be placed in the comments.