We are once again talkin' schedules.

Perhaps realizing that they're just as bored as the rest of us as we suffer through the dog days of summer (get here soon, football), the Big Ten chose today to release the conference football schedules for 2016 and 2017. These schedules are also noteworthy because they're the first ones to implement the nine-game conference schedule that was agreed to earlier in the offseason. Here are the full* Iowa schedules for 2016 and 2017. League game information come courtesy of the Big Ten, while non-conference game information comes via Hawkeye Drive.

REMINDER: Here's our early breakdown of the 2014 schedule and the 2015 schedule.

*To the extent that we have that information, at least. As you can see below, information about Iowa's 2017 non-conference slate is still fuzzy.

NOTE: I'm not going to spend much time discussing whether or not these schedules look "easy" or "hard," because that's an exercise in futility at this point. We have some idea of which teams might be good in 2013. We have a little idea of which teams might be good in 2014. Beyond that, though, you're better off just throwing up your hands. Sure, based on historical trends and recent recruiting hauls, we could make some semi-educated guesses, but those games are so far away and so much can happen between now and then that it really isn't worth worrying about. For instance, Ohio State comes to Iowa in 2017 -- uh oh! Except who knows, maybe Urban Meyer has already left by then to coach the Cleveland Browns "spend time with his family." How many of the players who will play in those 2016 (let alone 2017) games are even on their respective campuses yet? Anyway. 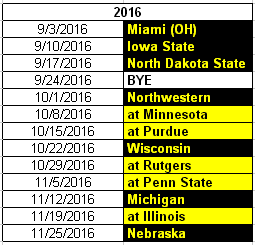 Some thoughts on the 2016 schedule:

* Iowa doesn't leave Iowa City until a 10/8 road trip to Minnesota. Which means a) 2016 could be a good season for Iowa to get off to a strong start and b) Iowa actually gets to open B1G play at home. Cthulu be praised, the Delanybot has blessed Iowa with a home opener in conference play.

* In fact, from a fan-interest standpoint, 2016 sure looks like one of the better home slates Iowa's seen in quite a while: Iowa State, Northwestern, Wisconsin, Michigan, and Nebraska should be a very attractive slate if you're an Iowa fan. I think it's probably the best-looking home schedule since 2010.

I'm omitting the likes of the directional Michigans and Tennessee Techs from these lists because they are what they are: uninteresting opponents there primarily to get a paycheck and -- in theory -- take a beating. (Western Michigan has been really bad at the second part of that equation.) Due to the in-state factor, games with UNI do have a little more juice than your Missouri States and Tenneesee Techs, but FCS is still FCS.

* In case you've already forgotten, Iowa's future West Division-mates will be Northwestern, Minnesota, Purdue, Wisconsin, Illinois, and Nebraska. So they'll be on every schedule from now on (you know, until the conference adds more teams and the divisions get realigned again), just flipping home and away every year.

* Rutgers, Penn State, and Michigan are Iowa's three East Division opponents in 2016. Curiously, the Rutgers and Penn State games are back-to-back, meaning that Iowa will be making back-to-back trips out east in late October/early November. Maybe they can just crash at the Newark airport that week in-between games.

* Speaking of Rutgers... 2016 is out first opportunity to welcome them to the Big Ten (in football, at least). 2016 will also be Iowa's first game against Penn State since 2012 and first trip to Happy Valley since 2011. 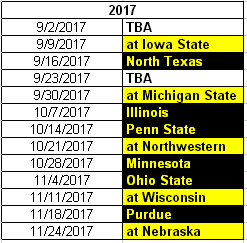 Some thoughts about the 2017 schedule...

* As noted, this year is Iowa's turn to get five home games. Unfortunately, the home slate in 2017 isn't quite as tasty-looking. Penn State and Ohio State are the highlights (along with the Floyd of Rosedale game against Minnesota), but the other games are against Illinois and Purdue (as well as two likely-to-be-lousy non-conference teams). Eh.

* Also, the notion of playing cross-divisional opponents home-and-away in back-to-back years is (mostly) going away with the advent of the nine-game conference schedule. Iowa will play Rutgers, Penn State, and Michigan from the East in 2016, but they'll play Michigan State, Penn State, and Ohio State in 2017. Absent both years: Maryland and Indiana. The idea behind this scheduling philosophy is to rotate through cross-divisional opponents more rapidly, so that a player can see every team from the other division during his 4-year career, although he won't necessarily play them home and away during that span.

* The downside is that this policy can create some weird scheduling trends.

Maryland: last home game (2015), last road game (2014). Iowa gets home and away games against a B1G newbie right away, then goes at least two years without playing them.

Ohio State: last home game (2017), last road game (2013). OSU and Iowa remain two ships passing in the night in B1G football play. Since Ferentz arrived at Iowa in 1999, Iowa and Ohio State have played just 8 times. They're only slated to play each other twice in the next five years (2013, 2017). 10 times in almost 20 years. I'd have to double check, but I think that would make OSU Iowa's most-infrequent B1G opponent since Ferentz arrived. In other words, if attending an Iowa game in every B1G stadium is on your personal bucket list, you might want to think hard about making 2013 the year you attend the OSU game: Iowa might get bludgeoned, but who knows when Iowa will next make a trip to Columbus. Also, Iowa will go 7 years (2010-2017) between games against Ohio State in Iowa City.

EDIT: I ran the numbers and Iowa will have played Ohio State 10 times between 1999 and 2017, which is the fewest for any Big Ten opponent in that span (counting only teams that have been in the Big Ten since 1999). In fact, Iowa will end up playing Nebraska -- who wasn't even in the Big Ten until 2011 -- nine times in that same timeframe (although the '99 and '00 games were non-conference games, of course). Scheduling be crazy, yo.

Rutgers: last home game (???), last road game (2016). We still don't know when Iowa fans will get to welcome Rutgers to Iowa City, although we do know when we'll get our first look at East Rutherford (2016). There would be something faintly absurd about adding Rutgers in 2014 and not hosting them in a football game until 2019 -- but it could happen. Hooray, expanspionpalooza!

Thoughts? Anything about the 2016 or 2017 schedules that particularly excites you? Looking forward to roadtripping out to Rutgers in '16? Eager to welcome Ohio State back to Kinnick in '17?