A few more schedule pieces for the future fall into place.

A few weeks ago, the Big Ten officially released the 2014 conference football schedule. There was definite intrigue to that release since it was the first schedule including the Big Ten's newest members, Rutgers and Maryland. And there will be some definite interest when the 2016 league schedule gets released at some point in the indeterminate future, since that will be the first slate to include nine conference games. But there's a bit less intrigue this time, since this schedule is basically just the inverted version of that 2014 schedule -- everyone who played a road game against a conference foe in 2014 gets a home game against that team in 2015 and vice versa. The only (slight) difference is the order of the games.

So without further ado... 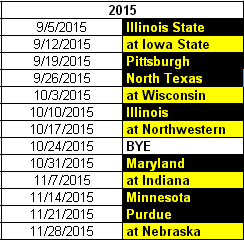 Like we said last time, on paper this looks like an awfully favorable slate of games for Iowa, although the toughest games all appear to be away from home on this schedule (Iowa plays at Nebraska, Wisconsin, Northwestern, and Iowa State). Just as they did in 2014, Iowa skips games with Ohio State, Michigan, Michigan State, and Penn State. The schedule is heavy on border rivals (which is also a bit inevitable when there are five different schools in the league that you can count as border rivals), while the cross-divisional games bring us Maryland and Indiana. Of course, what these opponents lack in name value (or History-with-a-capital-H) they make up for in competitive value -- as in, Iowa should be able to compete with (and beat) virtually everyone on this schedule. Put it this way: if Iowa manages to go .500 or worse in 2014 and 2015 with these schedules, there aren't going to be many Iowa fans lining up to keep Kirk Ferentz around.

A few other thoughts...

* The Iowa athletic department had better hope that Iowa has a strong season in 2014 or that season ticket holders are just too apathetic to cancel their plans because the 2015 home slate is going to be a tough sell. Illinois State, Pittsburgh, North Texas, Illinois, Maryland, Minnesota, and Purdue? Yikes.

* Along those same lines... if we thought it was hard to get a home night game in 2014, then 2015 doesn't look any easier. The best bets might be Pitt and Illinois and even that probably depends on what else BTN has available to air in primetime those weeks.

* Assuming he's still coaching there in two years, the 2015 North Texas game would be Dan McCarney's first game in Iowa City since 2006.

* Illinois and Northwestern should probably let us just keep the Land of Lincoln trophy if we go 3-0 against teams from that state in 2015.

* Speaking of Illinois... they'll be making their first trip to Kinnick Stadium since 2007 when EPIC GREENWOOD helped secure Iowa's best win of a forgettable season. But seriously: eight years! Two full classes of players could have come and gone through Champaign without ever setting foot in Iowa City. Thanks, Delanybot 9000.

* That's a pretty good sandwich of rivalry games Iowa has at the end of November: the Floyd of Rosedale game and the Heroes game are sandwiched around a bitter contest with Our Most Hated Rival.

* You should probably start working on your TMNT costume for the Halloween game against Maryland now.

The full league schedule for 2015 is available here.