Continuing the schedule-based theme of so many of our posts of late, we now bring you word that the Big Ten has finally released the revised 2014 conference football schedule. You might recall that they'd released a schedule a while back, but then they went and added Rutgers and Maryland, which required a bit of a rethink. Apparently some people didn't think just having Rutgers and Maryland play each other eight times in a row while the rest of the league went about its business would be such a hot idea. HARRUMPH. (If you're wondering what the original 2014 schedule looked like, just take a peek at the 2013 slate and flip the home/away status for every game.) 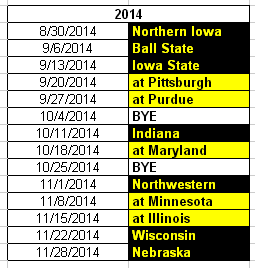 This... is a pretty damn favorable schedule for Iowa -- at least on paper. There's been a lot of consternation about the Iowa's 2013 schedule and, to be sure, it does look rather unfriendly with Iowa hosting fellow Legends Michigan and Michigan State, and replacing Leaders Indiana and Purdue with Ohio State (in the 'Shoe) and Wisconsin. But the 2014 schedule... that looks much more navigable. Ohio State's return to the schedule lasts just one year, while Michigan and Michigan State also rotate off. Iowa gains former Leaders Wisconsin and Illinois (who?) as part of the new divisional alignment and their cross-divisional opponents are Indiana and Maryland, probably the two softest teams in the new East division.

From a talent standpoint, 2014 is a year that we've been cautiously optimistic about for a while, hoping that the mass blooding of young players in 2012 and 2013 would pay dividends that season, with those raw youngsters becoming seasoned, experienced Big Ten players. Hopefully that transformation does indeed occur for Iowa and if it does, well, now we know that they appear to have a very advantageous schedule.

A few other thoughts:

* The home/away balance of games in this schedule is a little out of whack. Iowa opens with three home games and closes with a pair of home games, but in-between Kinnick Stadium is going to be a very lonely place. In fact, between Iowa's mid-September home game against Iowa State and their November 1st date with Northwestern, Iowa plays a whopping one home game: Indiana on October 11th. That's not exactly fan-friendly.

* As Pat pointed out on Twitter, that schedule is also going to make it tough for Iowa to get a home night game in 2014. Barta is unlikely to sign off on the Iowa State game at night or a November night game, which leaves just UNI, Ball State, and Indiana as potential home night games. In fact, assuming the Big Ten continues to shy away from November night games, it's hard to find any potential night games for Iowa on that schedule. The most interesting games on the slate are all back-loaded into November.

* It's worth noting that the double-bye week feature is just a quirk of the calendar. Labor Day comes very early in 2014 (and in 2013 as well, when Iowa also has double bye weeks).

* The 2014 season will come down to performance in November. Unless something goes really wrong, Iowa should enter November with their West Division title hopes alive and in their own hands. They also get probably their three toughest West Division opponents at home (Northwestern, Wisconsin, Nebraska).

* Who's that Iowa plays on 11/15? BAH GAWD, THAT'S ILLINOIS' MUSIC! Yes, for the first time in six years, Iowa will play the Fightin' Illini in football. Mind you, the last time Iowa and Illinois played (2008), that game was also in Champaign, meaning that there will be an EIGHT YEAR SPAN between Iowa-Illinois games in Iowa City (2007-2015). Good job, good effort, Delanybot 9000.

* Speaking of the Delanybot 9000 and weird scheduling quirks... Iowa plays at Minnesota on 11/8. This follows on the heels of trips to Minneapolis in 2010, 2011, and 2013, meaning that Iowa will have played the Gophers in MSP in 4 out of 5 years. That's pretty damn weird. As a resident of Minneapolis, I can't say I mind getting to watch Iowa play 20 minutes from my house... although I sure wish those games didn't always end with me wallowing in sadness.

* The 2014 conference schedules for every B1G team can be found here; if you think Iowa has a favorable conference slate, look at Wisconsin's. (On the flipside, Rutgers is getting the "bag full of doorknobs" welcome to the Big Ten; in addition to games against fellow East Division teams Michigan, Michigan State, Ohio State, and Penn State, they also have to play Wisconsin and Nebraska from the West.)

* The 2015 schedule hasn't been released yet, but there's a good chance it's just the 2014 schedule with the home and away games flipped.