Did the Iowa football program steal a long-since-forgotten memento of its rivalry with Iowa State? You be the judge!

The Iowa football program released a video depicting their new practice facility, offices, recruiting hub, and banquet facilities Wednesday. The expansion, currently under construction and scheduled to be completed by fall 2014, features a new strength training room with walk-out access to the already-completed indoor practice facility, expanded team meeting rooms, a "Hall of Champions" and "Consensus All-American Room" for promotion, a new locker room for the team, and improved schmooze-ready accommodations for visiting recruits.

The facility also includes a number of trophy cases. Some, like the Orange Bowl trophy case and the Nile Kinnick Heisman Trophy case, are clearly already marked for use by trophies that Iowa has not managed to lose. Others are earmarked for traveling trophies, many of which Iowa is not currently holding. Of the four traveling trophies in Iowa's current rivalry games, only one -- Floyd of Rosedale -- is currently residing in Iowa City.

The persons responsible for this video are clearly focusing on accuracy, though. We found this still image while watching the tour of the "Consensus All-American Room": 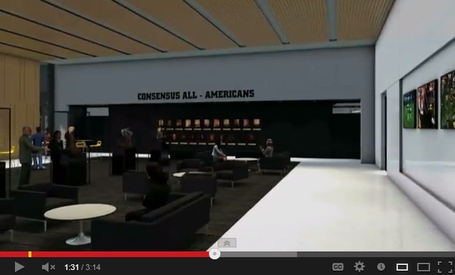 We used our special video clarifying software to zoom in on the trophy in the middle cabinet, a trophy we didn't immediately recognize: 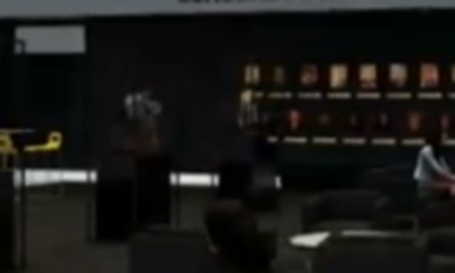 When we sharpened the image, we were stunned at what we found: 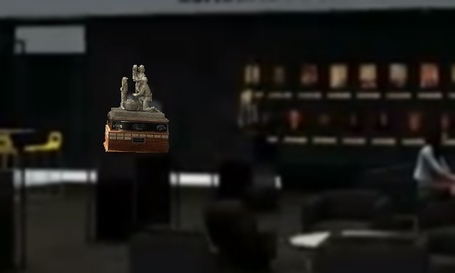 That is the never-used Cy-Hawk Trophy/Precious Moments figurine! The controversial "trophy" went missing after its brief appearance in the national spotlight, and was thought to have been smelted down like Arnold Schwarzenegger at the end of Terminator 2. Apparently, it is more like T-1000, because it has reformed and is apparently lurking around Iowa's football facilities, assuming the form of a campus policeman and asking if you have seen this ear of sweet corn.

We demand a full investigation of how the statue got to the Iowa football offices; while it is true that, at 0-0, Kirk Ferentz's record in games played for the trophy is far better than his record in pretty much every other trophy game, it gives Iowa football no right to take that trophy out of its rightful place in the clearance section of a Hallmark cards & gifts shop.