Do the Hokey Pokey.

Hayden Fry turns 84 today. That's not a particularly momentous birthday, aside from the fact that any birthday past 80 is probably a little bit momentous since it means you've lasted another year. But it's also noteworthy this year because Hayden Fry took the time to give a long, wide-reaching interview with the Iowa City Press-Citizen that is absolutely worth your time to read.

Fry remains perhaps the most quotable Iowa coach -- in any sport -- of all-time and his easy charisma and phenomenal storytelling ability shines through in every anecdote. Even if you've heard some of the stories before (and chances are that you have), there's still joy to be found in a good story, well-told.

If you could pick the musical entertainment for Fry Fest (Coralville's annual festival named after the coach), what would it be?

HF: No question I’d get Willie Nelson. … Willie and I became real good friends. He did a benefit show for me at North Texas. After the big show, we had a reception out on the ranch, and a lot of my coaching staff, the (school) president and so forth, different people, were there.

He said, ‘You’ve got a pen?’ I said, ‘Yes, sir.’ He said, ‘Give it to me.’ I gave it to him. He endorsed it right back to the North Texas Athletic Department and handed it to me, winked at me, said ‘enjoy’ and walked away.

Fry is also more forthcoming than he's ever been about his ongoing battle with cancer, which is both illuminating and a little scary. Death claims everyone eventually, but I don't want to imagine a world without Hayden Fry in it -- not now, not ever. So if you've got a spare moment, send some well-wishes Hayden's way as he continues to battle cancer.

Speaking of Fry-Fest, the details for this year's Fry-Fest were also announced -- Hlas has a rundown here, as well as some video from the event.

Oh, and enjoy this picture of Hayden and his coaching staff from an old Iowa media guide: 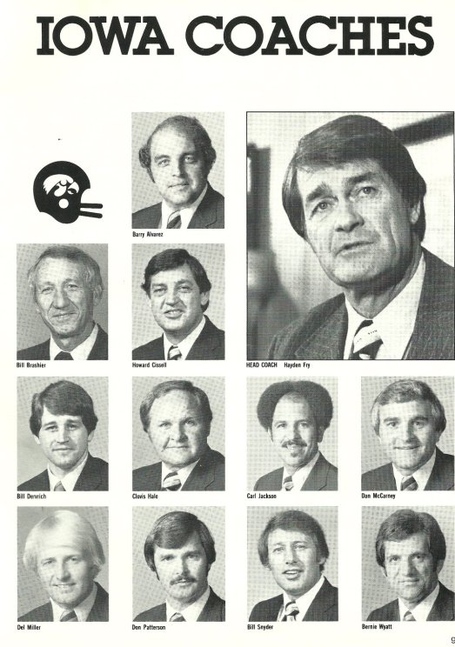