On "Blackouts" and special uniforms -- or the lack thereof when it comes to Iowa football.

Share All sharing options for: Maybe Iowa Should Start Playing the Uniform Game

Can we back up a few days and talk about that "Blackout" game that Iowa had last Saturday against Wisconsin? Because it's kind of indicative of the malaise this entire program is in right now. This is what Iowa wore last Saturday: 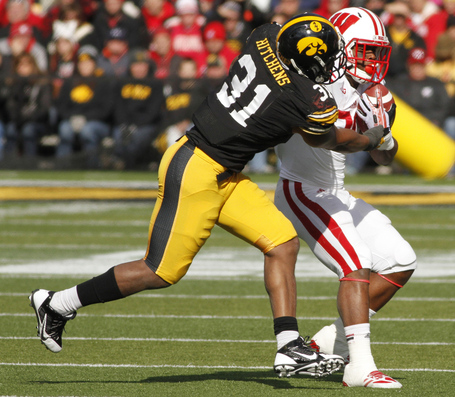 Now, I have no beef with Iowa's regular home uniforms. I like them a lot, Steelers rip-offs or not. I think our combination of black-and-gold is incredibly aesthetically pleasing, I like the stripes on the sleeve, I like the stripe down the pant leg, and I think our helmet is just great. The point of this discussion is not to call for a complete makeover of Iowa's look, because I don't think we need it. I think our regular look is still very, very solid.

I just don't think we need to wear it for every single home game. Especially when there's a built-in reason to shake things up a little like, I dunno, a "Blackout" game. Iowa wasn't the only team in college football to have a "Blackout" game last week. Purdue and Fresno State also had "Blackout" games last weekend. What did they look like? Glad you asked! 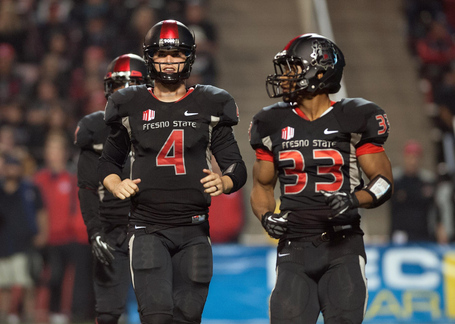 Now I call a little bit of bullshit on Fresno State even having a "Blackout" game considering that black ISN'T EVEN ONE OF THEIR COLORS (red and navy are their traditional colors), but what the hell -- the train left the station on that complaint a long, long time ago. The point is that they did a "Blackout" game and they most definitely did not wear their regular uniforms. They wore these frankly pretty slick all-black get-ups, with red and gray/silver highlights. It would be dumb as hell for these to become their regular uniforms (again, their colors are red and navy), but for a one-off special event game? Pretty damn cool, I'd say. 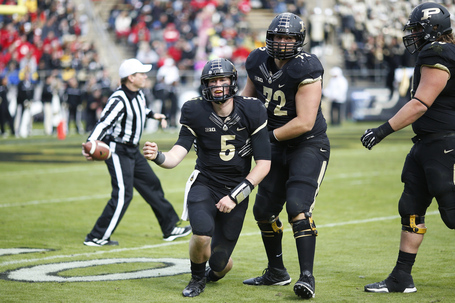 Yes, that is a set of train tracks on the Purdue helmets. CHOO-CHOO. Live the gimmick, y'all. Unlike Fresno State, black is one of Purdue's primary colors (black and whatever they call their shade of gold -- Vegas Gold? Old Gold? Piss Gold?), so wearing an all-black uniform isn't a huge departure for them. (They do it pretty regularly, in fact.) But since this was scheduled as a "Blackout" event*, they went the extra mile and created a special, train-ified all-black uniform. I don't think it's quite as good as Fresno State's look (although it is truer to Purdue's image), but it's still a nice little departure.

* Sidenote: for future reference, you should probably be sure to schedule a "Blackout" event for games in which there isn't a good chance of the opposing team's fanbase coming in and buying up a ton of seats. It kind of kills the "blackout" effect when almost half the stadium is red. 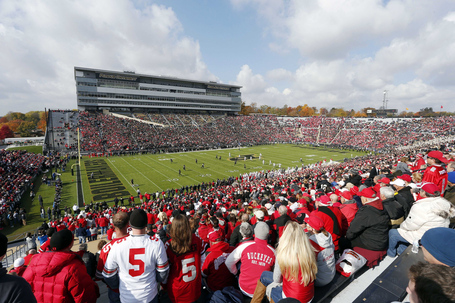 The Iowa football program is not exactly overflowing with excitement or vitality at the moment. Even the coaches are admitting that the gameday experience leaves something to be desired (a point which we have more to say, in a future post). Whatever excitement the offense promised in the early part of the season has been ground away by league play and a series of offensively inept performances that seemed to offer a lot of the same ol', same ol'. The Parker-led Iowa defense is a lot like the old Parker-led Iowa defense, only not as good (and with 15% more blitzes!). Kirk Ferentz has been the head man here for 15 years now and that old chestnut about familiarity breeding contempt is starting to ring true (I think a more apt chestnut might be "a steady stream of .500-ish records breeds contempt," but hey) for Iowa fans.

An alternate uniform isn't going to magically fix all of that, unless it comes equipped with jetpacks and kevlar body armor (Oregon probably already has their top uniform scientists hard at work on those very innovations as we speak). But it would be an outward sign -- a very visible sign -- that this program is at least trying to appear a little bit contemporary, that it isn't completely a program perpetually stuck in the mud and swallowed up by tradition and an unbending fealty to the old ways.

It's not like Iowa hasn't experimented with alternate uniforms in the past -- hell, they wore alternates twice last year alone (the throwbacks against Iowa State and the Military Appreciation/Veteran's Day duds against Purdue). And it's not like Iowa needs to go buck wild and start imitating Oregon in the uniform department. There's a pretty wide range of possibilities between "same ol', same ol'" and "Oregon." Maybe one day teams will go back to traditional uniforms and they'll wear the same thing for every home game and the same thing for every away game and we won't have to worry about the latest innovations in football uniform design. Kirk Ferentz would probably like that very much. But right now the rising tide is in favor of alternate uniforms. Players (and recruits) seem to almost universally love 'em, fans (mostly) like 'em**, and they're an easy way to get attention (albeit not always the best kind of attention, right, Northwestern?) in an increasingly crowded information marketplace.

** This image is really old (and not particularly good) and it still set the Hawkeye interwebs abuzz earlier this season when there were (totally false) rumors that Iowa would be rocking something like this in a game this year.

Kirk Ferentz is fond of saying that Iowa "doesn't have a lot of sizzle." That might be fine if you have a really good steak to sell instead (although it's worth noting that even some of the steak-iest programs in college football have dabbled in alternate uniforms in recent years, like Ohio State, Michigan, and LSU), but for a program that's a little low on good steak at the moment, maybe a little sizzle is just what the doctor ordered. And, look, alternate uniforms aren't going to change the way Iowa plays, but hey -- maybe a one-off uniform will provide a slight distraction from seeing Iowa's safeties get burned (again) or seeing Iowa come up short on third down (again). At the very least, they'd give us something else to talk about.

And if you're a creative type, feel free to fire up Photoshop (or MS Paint, if you're a hipster like us) and show us your finest alternate Iowa uniform.