One for the Cutters: Jordan Canzeri in the Iowa Zone Running Game

How Michigan State stopped the Mark Weisman train on the tracks, and how Jordan Canzeri is the perfect counterpunch to what Sparty did.

Share All sharing options for: One for the Cutters: Jordan Canzeri in the Iowa Zone Running Game

NOTE: If you don't have a rudimentary understanding of zone blocking and the stretch play, you're probably going to get lost right off the bat. I would highly recommend two sources: This post from MGoBlog in 2008, and the "Runners in Disguise" portion of this post by Smart Football's Chris Brown at Dr. Saturday.  I would recommend those even if you think you understand the stretch, because you're an Iowa fan.  You should really understand the stretch.

While this year's version of the Iowa offense has included refreshing new things like pulling guards and trap plays, the bread and butter of the Iowa running game -- and, by virtue of that, Iowa's entire offensive philosophy -- has always been the zone stretch play.  The concept behind the zone stretch is relatively simple.  I reference the MGo Post linked above:

A zone block allows (or forces, depending on your point of view) the offensive linemen to react to the defense after the snap. In traditional schemes, a slanting or stunting defensive tackle is either going to run himself into the play or out of it and you just have to hope it's the latter. This would be analogous to running a combination route designed to defeat zone coverage even when the opponent is clearly in man. You're putting yourself at the mercy of the opponent's decisions. Zone blocking removes this problem by getting double-teams on critical members of the defensive line, then releasing those blocks in a certain fashion that depends on what the defense does. The end result is a flexible, resilient set of interior blocks.

Here's how the running works, according to Chris Brown (again, linked above):

On outside zone plays, the "covered" offensive linemen (those with a defender lined up directly in front of them) will take a little bit more of a lateral first step and try to "reach" the defender -- that is, get their body in position to seal the defender from chasing the ball outside. The running back aims for a point outside the tight end, though he can cut it upfield wherever a seam appears.

The emphasis on the slant is of extra importance to today's topic: Why the Mark Weisman stretch stopped working about 45 seconds into the Michigan State game, and why Jordan Canzeri works now.

In case you were hurtling through space in September, here was Iowa's schedule and their NCAA rank against the run as of right now, along with Weisman's carries and yardage totals for each opponent

The Western Michigan game is a bit of an outlier, but only because it was such an unholy blowout that the coaches finally had the luxury of letting the Hebrew Hammer take a breather.  Otherwise, the story is fairly clear: Mark Weisman running 20+ times against middling-to-poor rush defenses and racking up more than four yards a carry.

There was a second theme in all of those games: A dominant Iowa offensive line -- particularly a dominant left side of the line -- effectively running the zone stretch.  Brandon Scherff and the tight ends were able to either seal the edge against those five teams or drive undersized defenders out of the play toward the sideline, while Iowa's interior line sealed defensive tackles and sprung blockers into the second level.  Weisman could take the handoff and run at the tight end and, depending on where Scherff put his man, either go outside tackle or, with a small adjustment, between tackle and guard.  The net result: 236 pounds of runaway train running straight ahead at outside linebackers and safeties, which means Weisman gets five yards just by falling forward and 12 by breaking a tackle or two.

Coaches watch film, though, and it did not take long for Michigan State's braintrust to figure out how to shut Weisman down.  Here is Iowa's second play from scrimmage against MSU. 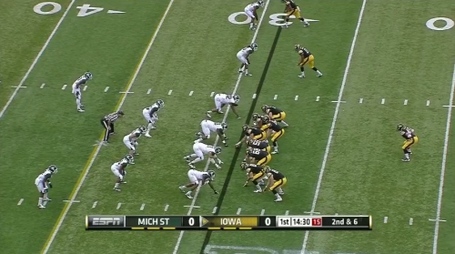 Iowa is facing 2nd and 6 at its own 29 yard line.  The offense lines up with two tight ends left, two receivers right, and Weisman alone in the backfield.  Michigan State is in a straight-up 4-3 alignment, with the weak side defensive tackle over center. 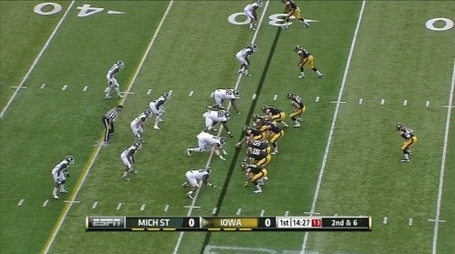 Iowa motions a tight end right, which only evens the interior formation, but Michigan State's response is to shift the line toward the motioning tight end, putting the left-side defensive tackle in the gap and the right-side defensive tackle over the right guard.  The linebackers also take a step toward the side where the motioning player went.  Sparty's already leaning toward zone stretch right. 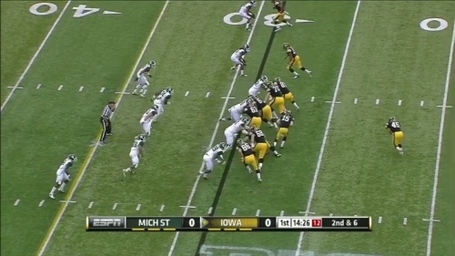 In a typical zone scheme, this is where the running back's ability comes into play.  With the center's seal block toward the sideline, three linebackers rushing for the edge, and an effective double-team on the backside defensive end, the obvious move would be to cut back and run between the defensive tackles or, if that cut block by the left guard is ineffective, between the backside tackle and end.

That's not Weisman's game, though, and Michigan State knows this. 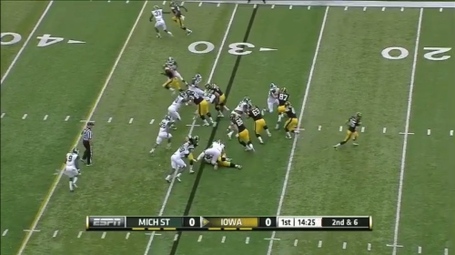 The tight end has the defensive end blocked, if not sealed, on the right edge.  The right tackle and guard have moved into the second level and are swallowing up linebackers whole.  Blythe, the center, is pushing the defensive tackle toward the sideline, and Brandon Scherff is eyeing Denicos Allen and remembering that he missed breakfast this morning.  The lane is behind Scherff, through the middle of the formation.  But Weisman has not made a cutback in his life, and so he does what he always does: Run at the tight end, and right where the blocks are meant to put Michigan State's guys.  You know where it goes from here. 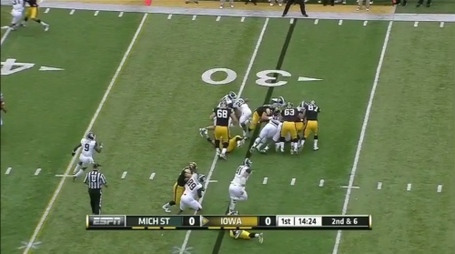 Yep, that's pretty much it.

Michigan State did this all day against Weisman and Bullock (who also never, ever, ever cuts back), using Iowa's formation and motion to guess at where the stretch would go, slanting toward that side, and watching Iowa's running backs run valiantly into certain death.  The lack of a cutback took away the biggest constraint against what Sparty was doing.  The only other constraint -- the downside of guessing wrong on the slant -- was both rare, due to Iowa's unbalanced lines and tendencies out of motion, and not particularly threatening, because Mark Weisman isn't going to outrun anyone.  If Iowa gets zero yards the four times in five that you guess right and ten yards on the one play you guess wrong, they're still averaging two yards a carry.  They're still punting.

This played out again and again over the next four weeks, as Ohio State, Northwestern, and Wisconsin did the same thing to shut down Weisman.  It became so obvious that I could make jokes like this during NFL games:

Weisman would have taken it right. RT @TomFornelli: Look at the hole James Starks had to run through. pic.twitter.com/AWqM7eLBzv

And here's the thing: HE WOULD HAVE.

Enter Jordan Canzeri, the only halfback in Iowa's rotation that has an effective cutback move.  Suddenly, the sellout slanting stopped working, as the interior holes they created became a viable option.  Here's a play against Purdue. 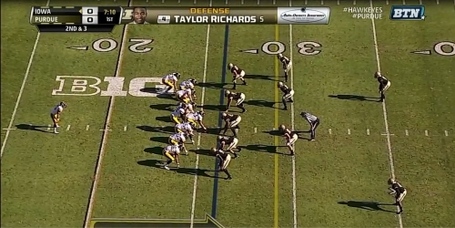 Iowa lines up in a three tight end formation, which does not necessarily tip the direction of the stretch.  Purdue, playing in a 3-4, has a safety up and shaded to the strong side of the formation.  The alignment puts a tackle directly over the center, an end over the tackle, and an outside linebacker on the outside shoulder of the tight end.  This formation, especially against Wisconsin, gave Iowa serious problems, as sealing the outside for a Weisman run became nearly impossible.  Runs had to go between the tackle and tight end, and everyone knew it. 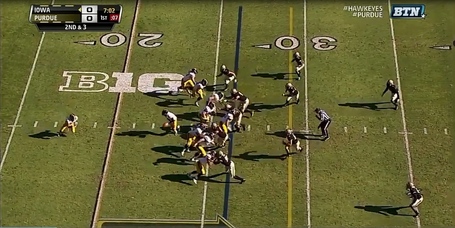 Purdue flows right with the Iowa line at the snap, as everyone else has been doing for a month.  It's not quite man-on-man at the snap, as the right guard takes the defensive end (despite his pre-snap alignment over the tackle) and takes him toward the sideline.  The right tackle goes to the seond level in search of the play-side middle linebacker, and the center loos for the off-side MLB (this is the one upside of running stretch against the 3-4; the linebackers are in position to be sealed off the play if you can get there fast).  Despite starting inside, Walsh (RG) does a nice job of getting heads-up with the defensive end. 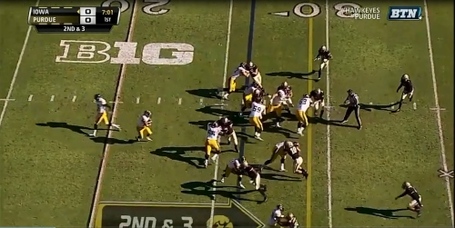 This is where the strategy being deployed by Purdue shows itself.  Jordan Walsh (#65, right guard) is supposed to seal his man inside if he can.  While he did a nice job of getting in position to do that, he does not have the leverage to hold up, and is getting shoved backwards.  The defender, though, is not moving Walsh into the backfield.  He's moving Walsh toward the sideline, where the slant is supposed to go.  The linemen have been told to get outside at all costs against the stretch, so the defender is literally taking Walsh where he is supposed to go.  The rest of the blocking is solid, and an obvious hole is opening right behind that defensive end.  Weisman's insistence on going outside the guard would have ran him into trouble here.  But Canzeri can cut.

A player with Weisman's skill set certainly has a place in Iowa's system.  In games where the line is dominant, he is the prototype for what Ferentz wants: Guaranteed to get four yards, could get up to 15, milks clock, protects the ball, and does enough in pass protection to not be a liability.

But Weisman has been gameplanned out of existence this year, and probably for some time to come.  Iowa needs a player to make defenses pay for selling out against the edge of the stretch play.  Canzeri's that guy, and he's reaping the rewards now.  A mix of the two -- Canzeri on the stretch, with Weisman on the inside zone and the non-zone runs that Iowa occasionally uses -- could be the best choice for the last two weeks of the season, and should be expected.