Share All sharing options for: Iowa-Michigan State: Breaking Down the Community Player Ratings

Iowa's worst loss of the season so far brings predictably grim ratings from the community.  It also brought forth one of the lower turnouts of the season in terms of responses; I suspect folks are not particularly enthused with Iowa football right now.  Let's see how bad the ratings were... 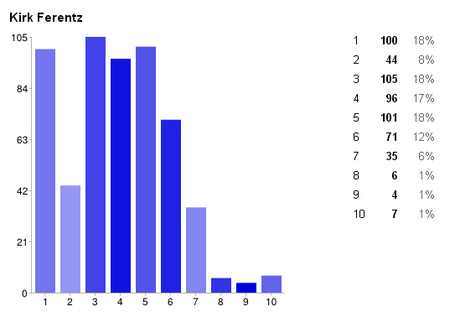 Oof.  That's... pretty bad.  (Sadly, it's also not even close to the lowest average rating from this game.)  Iowa looked ill-prepared from the start, made no successful adjustments at halftime, and, oh yeah, fell victim to a fake punt yet again.  I think it's fair to say this was not a game that will go in the Ferentz coaching time capsule.  17 responses 8 or higher would probably give us an idea of the troll population voting in the Community Player Ratings this week, too. 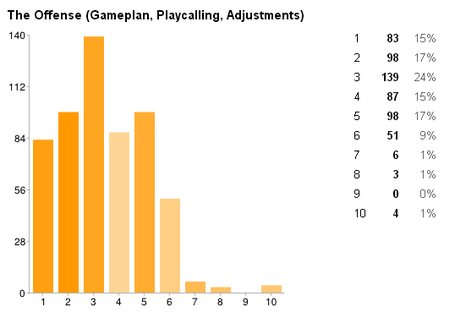 As little as people thought of KF's job on Saturday, they still liked it better than what they saw out of the offense.   Which is not surprising when you mount just three decent drives all day, squander the only good field position you get (the three-and-out after the Morris interception), and look generally hapless and one-dimensional.  Iowa had something clicking on offense in the second quarter (see: two quick scoring drives), but Iowa wasn't able to make any decent counter-adjustments to the adjustments that Michigan State made at halftime, leading to an offense of pain, pain, and more pain in the second half. 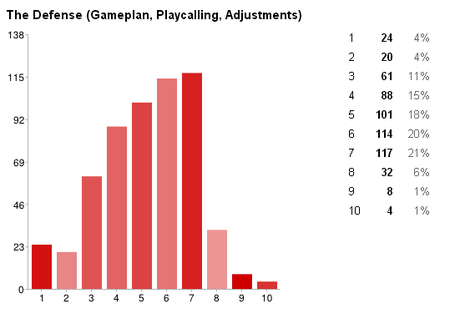 Not a terrible showing by the defense here; I thought it might be lower, considering they allowed Connor Cook to throw for almost 300 yards.  But they do deserve credit for holding relatively firm in adverse conditions; the offense and special teams frequently left the defense in lousy field position, but the defense did its damndest to prevent things from getting out of hand.  Forcing Michigan State into five field goal attempts (to go with the two touchdowns they scored) could have been a winning formula if the offense had been able to do anything of note.  The defense was also able to force a turnover when the game was still theoretically in reach; the overall numbers are pretty bad for this unit (412 yards of offense, 26 points), but given how much time they spent on the field and how little help they got from the rest of the Iowa team, they could have been far, far worse. 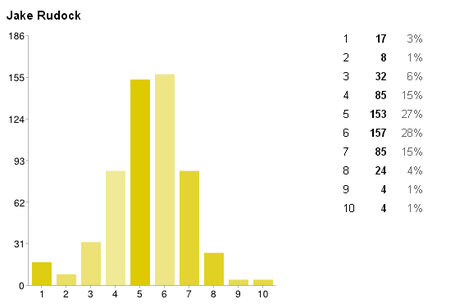 Rudock's two lowest-rated performances of the year have come in games with his two highest-yardage outputs (NIU, MSU).  Of course, they were also the two games with 2/3 of this interceptions for the year (two picks in each game) and they were games that Iowa lost.  Rudock did struggle on Saturday -- the first interception he threw was perhaps the worst pass he's thrown the entire season.  He looked very good in the second quarter, when he put together a 10/10 stretch that included both of Iowa's touchdown drives, but he couldn't get anything going in the second half until a too-late-to-matter drive at the end of the game.  There was a lot of pressure on Rudock in this game with the Iowa running game non-existent and unfortunately he couldn't quite make enough plays to carry Iowa's offense to victory. 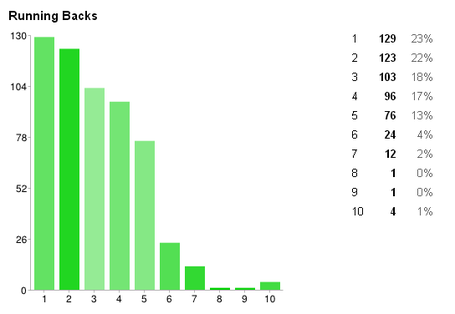 As noted above, the Iowa running game was non-existent in this game.  Weisman and Bullock were the only backs to see action; Weisman suffered an ankle injury early in the game and was limited thereafter, while Bullock's main contributions came in the passing game (where he did have a fantastic run after the catch to score Iowa's first touchdown).  But purely as actual running backs, Weisman and Bullock both looked very poor.  This was the worst rushing performance by Iowa in... uh, a really long time.  Hopefully the miserable rushing performance here was simply a reflection of Michigan State's excellent front seven and not a harbinger of things to come in Big Ten play; Iowa needs a strong running attack to have any hope of winning more games. 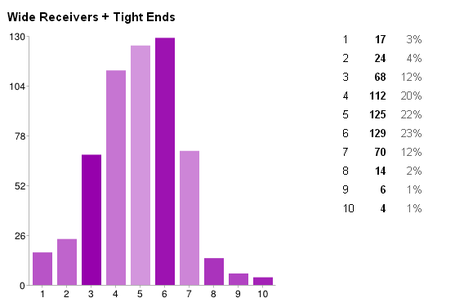 Like several units in this game, the wide receivers had the worst showing of the year on Saturday, at least based on the ratings.  I think that might be more of a reflection of the offense's general incompetence than a reflection of the receivers themselves, because they didn't seem too awful in this game, especially considering Iowa's top WR (KMM) was out for most of the game with a leg injury.  The biggest problem with the receivers was probably their inability to get open (and Michigan State's smothering secondary deserves some credit on that front, too); for once, drops didn't seem to be a particularly egregious problem.  Tevaun Smith had his best day for Iowa yet and VandeBerg emerged from the depths of the bench to replace KMM as Iowa's possession guy of choice with a credible effort.  The Polish Hat also made a great effort on his touchdown catch. 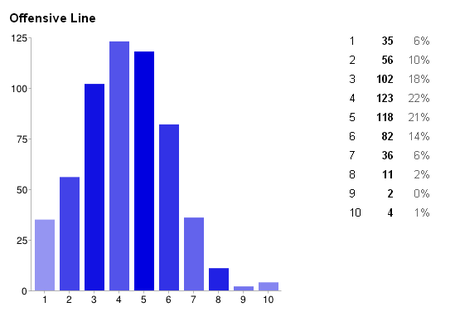 Rudock was never sacked on Saturday, but he was under pressure from MSU quite often and the ineptitude of the running game has been noted already.  The offensive line really struggled to open holes for the backs in this game and getting to the second level of blocks almost never happened.  That's not good.  The interior of the line once again had some struggles; halfway through the season, that area isn't getting quite as firmed up as we'd hoped it would a few weeks ago.  There's still a lot of rotation going on between Donnal and Walsh at OG; it would be nice if one of them could really step up and take command of the position. 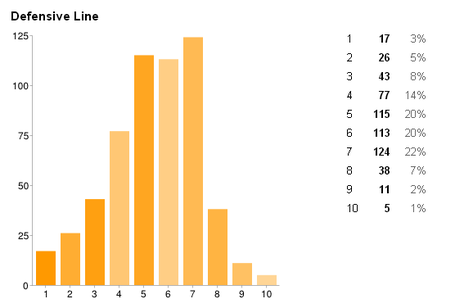 After two weeks of excellent play from the defensive line, things returned to, well, normal this week.  The defensive line did help hold MSU to 135 yards rushing on 37 carries (3.6 ypc), but they weren't able to get much pressure on Cook (outside of a pair of QB hurries from Ott), which helped Cook shred Iowa's defense through the air.  We knew going into the season that there would be ups and downs with this unit; last week was a definite up and this week was a definite down. 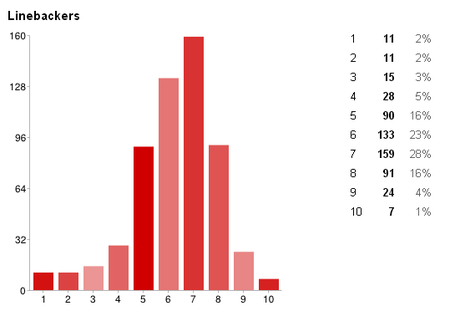 Business as usual: the linebackers were again the best part of the Iowa defense.  Morris and Hitchens were tackling machines, while Kirksey offered solid coverage.  Morris also came up with the defense's lone turnover (and at a very key time of the game as well).  There's not too much to complain about here, other than the fact that the linebackers weren't able to get much pressure on Cook, either. 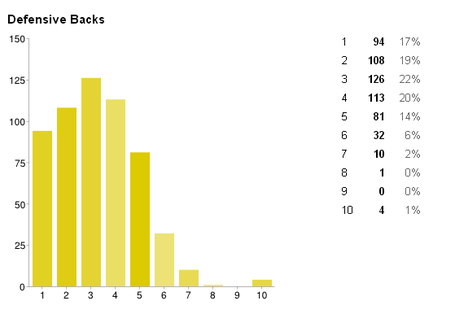 After a handful of mostly solid performances, the secondary came crashing back to their early season form on Saturday.  Most ominous was the fact that it came against Connor Cook, not exactly renowned for his aerial prowess.  One shudders to think what Braxton Miller or Northwestern's combo-pack of quarterbacks might do to this unit.  The fact that Iowa's four starting defensive backs had more tackles than Iowa's three starting linebackers is not a particularly good sign, especially since so many of them were solo tackles.  Lowery did fill up the stat sheet, though: 8 tackles, 3 pass break-ups, and even a QB hurry. 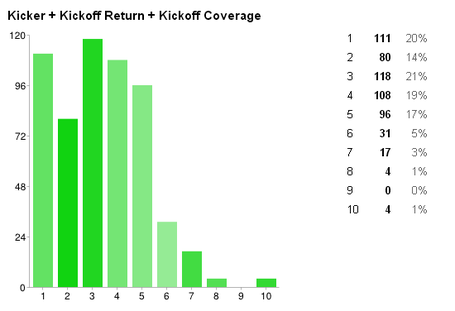 The ratings for the kicking game took it on the chin this week, perhaps more than they deserved, unless they were getting lumped in with the rest of the underachieving special teams.  Meyer did miss a field goal, but it was a 50-yard kick -- hardly a gimme.  The one kickoff return Michigan State did have went for almost 30 yards, though, so that remains an issue.  And Cotton's own kick return was pretty miserable (16 yards). 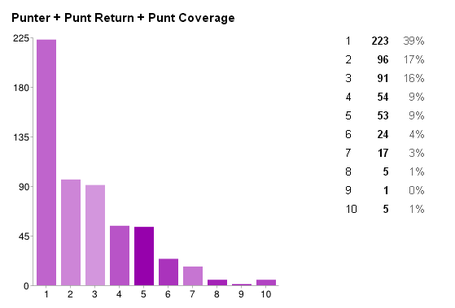 Yes, this is the lowest rating of the year so far for any unit.  One could argue that it's slightly unfair to penalize Kornbrath so much in this score, since his punts were pretty solid for the most part (I think he was only able to put one inside the MSU 20-yard line because he was usually kicking from so deep within his own territory), but MSU was able to break off a big return on one of his kicks, which didn't help.  And then there was the fake punt.  Another goddamn fake punt.  So, yeah, the record low score is probably deserved here.