In which we find a few things to like about Iowa playing Ohio State.

Share All sharing options for: Troy Smith Likes Unicorns and Other Great Memories From Iowa-Ohio State Games of Yore

Needless to say, as Iowa fans our cup does not exactly overfloweth when it comes to good memories about playing Ohio State.  There's no other Big Ten team that Iowa has struggled to beat more than the Buckeyes: dig that lifetime .246 winning percentage against our favorite poisonous nuts.   It's actually even worse in the modern (Fry + Ferentz) era: 4-19-1.  Ferentz has beat Ohio State precisely once (2004) and never in Columbus.  Hayden only logged three wins over Ohio State during his tenure, although two of them were in Columbus.  Ohio State was the turd in the punch bowl in the 1985 season.  When Ferentz led Iowa to one of its best Big Ten season ever in 2002 (8-0), Ohio State matched the feat and stole our thunder.  They are the school bully who doesn't even really care about us that much -- but still beats us up and takes our lunch money anyway.  Because they can.

Still, that history of failure does tend to make the moments of joy -- as infrequent as they are -- resonate even more strongly in the brainmeats.  So let's take a quick jaunt down memory lane to remember a few of them... 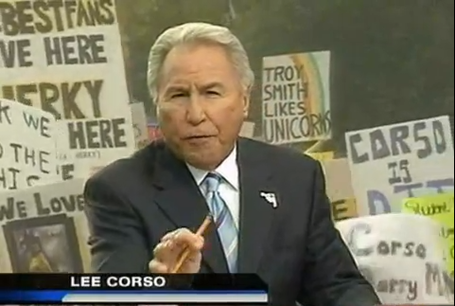 Look: everything that happened after this pretty much sucked.  Once the game kicked off and the teams started playing, things went pear-shaped in a hurry.  Ohio State was very, very good that year and Troy Smith was in full "Heisman Trophy-winning quarterback" mode.  They were the better team that night -- by far.

But until the game kicked off and Ohio State started beating kicking our ass up and down the field?  All that stuff was goddamn great. The energy in the stadium before kickoff was unreal.  The "gold rush" under the lights looked amazing.  The build-up on campus all week was a blast.  The excitement was through the roof everywhere and it hit another level with College GameDay on Saturday morning (which could have been even better if they'd found a way to put it near Kinnick Stadium, but I digress).  And the highlight of GameDay, the most indelible image and unforgettable memory was the sign up above: TROY SMITH LIKES UNICORNS.  So wonderfully random, so delightfully bizarre, so peculiarly accusatory.

Oh, and Corso put on the Herky head to pick Iowa to win the game, too.  That was pretty cool. 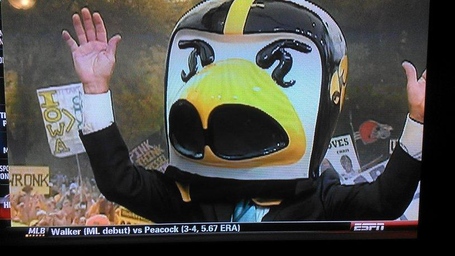 This is still one of my favorite celebrations ever by an Iowa player:

That it came in not just a win, but an absolute beatdown of Ohio State, just made it even sweeter.  Drew Tate was in full magic man mode that day, bombing the Buckeyes left, right, and center.  Games like this one are why the legend of Tate is so enduring and why so many of us have such fond memories of his time at Iowa.

Again: Iowa doesn't beat Ohio State very often.  They definitely don't beat Ohio State in the fabled Horseshoe very often.  So to do those two things AND win on a last-second touchdown pass?  Yeah, that's not too shabby.  Not too shabby at all.  I was all of five when this game happened so my own personal memories are pretty much non-existent, but I can certainly recognize its importance and it holds up well in video form years later.  All of you folks who actually remember the game can feel free to reminisce in the comments.

Iowa's last win over Ohio State in Columbus came on one the worst weekends in the history of Iowa City and the University of Iowa: the day after the Gang Lu shootings that left six people dead (including himself) and another seriously wounded.  Wearing plain black helmets to honor the victims of the shooting, Iowa went out that Saturday and won a close, low-scoring game over Ohio State, providing a brief respite for a community and fanbase reeling from the shock and horror of the shooting.

What about you?  Any fond memories from past Iowa-Ohio State games?  Hit up the comments!