You've got to hand it to Kirk Ferentz: He knows how to make news on a bye week.

In his press conference after his Hawkeyes' loss to Michigan State Saturday -- a loss in which the team gave up yet another fake punt for a first down -- Ferentz said his team might never return a punt again.  In Tuesday's press conference, he said he wasn't joking:

"If you pressed me today, I'd say we may never try to return a punt again," Ferentz said. "To do that, to block guys, you have to turn and go with those guys to shadow them. When you do that, you open the door. Michigan State did a good job of taking advantage of that.

"What helped us a couple of weeks ago [wide receiver Kevonte Martin-Manley's two punt returns for touchdowns vs. Western Michigan] we paid for on Saturday. It cost us a field goal and a possession. So yeah, I may be leaning toward the point where you never try to see us return one again. Just fair catch it and try to keep it off the ground."

In the most explosive age of innovation in the history of football, Kirk Ferentz chimes in by threating to never set up a punt return again.

The thing is: He might be on to something.

Iowa has now given up two fake punts for first downs this season, and a staggering six fake punts since 2010.  Each of those six fake punts has followed a basic formula: Line up in a spread punt/shield formtion, run the gunners and guards downfield to draw away defenders, then run for a first down while nobody's looking.  Ferentz, who has been critical of college punt return rules that allow players to go downfield on the snap of the ball, has found no answer beyond continued complaining about how he prefers the NFL punt rule.

Iowa's typical punt return setup is to line up a defender on each lineman, keep two additional players deep to help blocking, and half-heartedly run 1-2 players at the three-person wall in front of the punter.  Every player but those two turns and runs with his assigned lineman at the snap, and Iowa is left with one or two players against three blockers and the punter/ballcarrier.  That's math made easy for any special teams coach.

Here's how it played out against Michigan State. Sparty used the 'shield' formation that nearly every college football team now employs, with seven across the front, a three-person wall in front of the punter, and the punter deep.  Iowa lined up man-to-man across the front with a single rusher behind the line, two blockers 10 yards deep, and a return man: 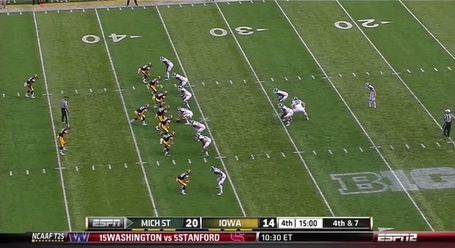 On the snap, Iowa does what Iowa does, and it opens the door for Michigan State. Six players across the line dropped deep, man-on-man with Michigan State tacklers.  Two rushed the shield, with just one getting even remotely close before MSU's punter took off. 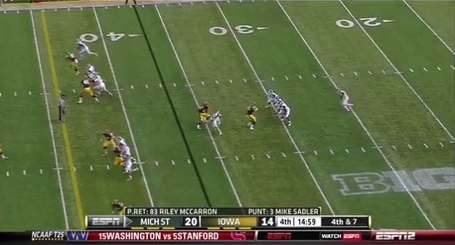 It's now two defenders on four blockers, with the rest of Iowa's return team not even paying attention to what is happening.  We know what happens next. 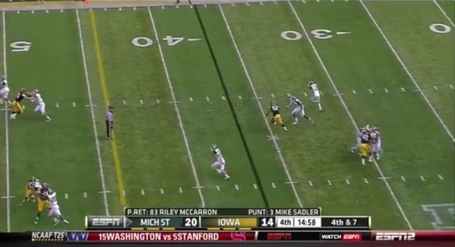 Two Sparty blockers swallow up Macon Plewa, and Quinton Alston is left to reverse direction, get around a blocker, and chase down Mike Sadler.  Downfield, Iowa's man-to-man scheme means blocking made easy for Michigan State.  This play was successful before it even began.

In 2008, Iowa played Northwestern at Kinnick.  The Hawkeyes took a 17-3 lead late in the first half, and stopped Northwestern at its own 23 with 1:14 left to play.  Ferentz took a timeout and sent out Andy Brodell to return the punt, hoping for field position to set up one more score.  Brodell fumbled the return, Northwestern recovered, and the Wildcats cashed in with a touchdown three plays later.  Iowa eventually lost that game by five points.

In 2009, Iowa was down 14-7 against Indiana late in the first half.  The Hawkeye defense stopped the Hoosiers at the Indiana 46 with less than a minute to play.  Ferentz again sent out his return man -- this time, Amari Spievey -- with instructions to "make a play."  Spievey fumbled the return bck to Indiana at the 12 yard line, and the Hoosiers had a 21-7 lead at halftime.

The next year, at Big Ten Media Days, Ferentz told a reporter (I'm almost certain it was Morehouse, but I can't find the article or video) that the Spievey fumble changed his philosophy on punt returns.  Iowa now taught its returners to focus on receiving the ball and not conceding a fumble; any additional yardage was gravy.  In 2011, Micah Hyde attempted a return on just two of 17 punts received in October games.  Over the course of the 2011 season, Iowa received 62 punts.  Half of those were touchbacks, out of bounds, or downed by the opponent without a return.  Hyde fair caught 18 and returned 12 (one was blocked).  Iowa netted 97 yards on 30 received punts, or 3.2 yards per returnable punt (and 1.6 yards per attempted punt).

The 2012 season was not significantly different.  Iowa forced 58 punts.  Of those attempts, just 16 were returned for 122 yards.  Iowa returners fair caught 14 kicks, and 28 were touchbacks, out of bounds, or downed by the opponent.  In the 9-6 loss to Iowa State, Iowa forced 8 punts and attempted a return on exactly none of them.  In the end, Iowa averaged 4.4 yards per returnable punt, and just 2.5 per attempted punt.

Obviously, Iowa's performance against Western Michigan this season -- five punts returned for 192 yards and two touchdowns -- was outside the norm.  Iowa clearly saw something it liked against one of the worst teams in FBS football.  But if you take that game out of the equation, Iowa has actually been more conservative than ever.  The Hawkeyes have forced 34 punts in their other five games this season.  Fifteen of those 34 were touchbacks, out of bounds, or downed by the opponent.  Fourteen of the nineteen returnable punts were fair caught.  The five attempted returns have netted 35 yards.  That's less than two yards per returnable punt, and one yard per attempted punt.

There's one thing for certain: Ferentz is not going to get more aggressive in punt return.  He's terrified of the rule, he abhors big plays against his special teams, and he hates giving the ball back to the opponent with good field position through a fake or fumble even more.  The question, then, is whether the routine momentum changes through opposition fakes is worth the upside.  Unless the opponent is Western Michigan, the answer to that question is pretty clearly in the negative.  Iowa's going to fair catch almost every punt as it is.  If that's the case, we might as well take out the possibility of a fake.

A constant interior rush against the spread punt formation could both eliminate the fake and create an occasional block.  At the very least, telegraphing that the rush is coming on every attempt could make some defenders stay home and buy the returner an extra second or two.  A 'punt safe' formation would at least take care of most of the fakes (I say most because Northern Illinois' fake punt was against Iowa's punt safe formation, and it still worked).  Either way, if losing a handful of yards per game in punt returns is the price to pay for getting rid of crippling fakes, then so be it.