Share All sharing options for: Iowa Football Coaching Carousel 2013: Nothing to See Here

It is January 15, 2013. Reports widely confirm that Soup Campbell's office is empty, CoachingSearch.com had him interviewing at Missouri last week, and Campbell himself has confirmed his departure to our own Planned Sick Days:

Iowa Athletics refuses to confirm that Campbell has left the program.

D.J. Hernandez, the former Miami graduate assistant, has been hired in some capacity by Iowa. His Twitter account has been updated to confirm it: 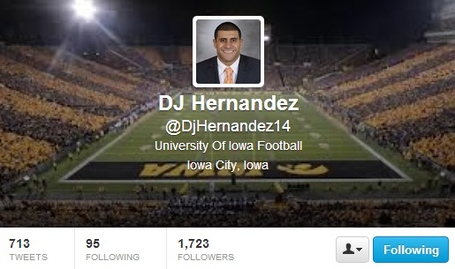 Iowa will not confirm the hiring, nor his position.

Speaking of Raih, reports surfaced yesterday that the longtime Iowa graduate assistant has taken an administrative position on Kliff Kingsbury's staff at Texas Tech. Raih spent three seasons in Iowa City, initially as an assistant quarterbacks coach to Ken O'Keefe before taking the tight ends spot. A three-year graduate assistant stint is rare; a fourth year is practically unprecedented. This does open the offensive graduate assistant spot, potentially for Hernandez.

No confirmation yet from Iowa Athletics, of course.

I understand not having a press conference every time an assistant leaves or arrives. I don't understand not issuing a statement to announce changes, especially when the coaches themselves are confirming the rumors. There is no explanation beyond Iowa's general public relations incompetence; as we all know, the ability of Iowa Football to deny the widely-observed reality is not a new phenomenon. At some point, one would think Kirk Ferentz is going to have to address the staff turnover. That day has not yet come, and we're not holding our breath for today, or tomorrow, or the rest of the winter.