It may not be much of a comfort to anyone, but Iowa was actually very fortunate to lose to Purdue on a last-second field goal. Or to put it another way, Iowa was lucky to be in the game at all. If Purdue could have just gotten out of its own way on a couple of occasions, they would have won by two touchdowns or more. Every time it looked like the Boilermakers were going to go ahead decisively, they managed to make an egregious blunder -- a fumble, a penalty, a missed field goal -- that kept Iowa inexplicably and unjustly still in the game. If we look at the win probability chart for the game, we can see exactly where these moments occurred (WP here refers to Iowa's chances of winning): 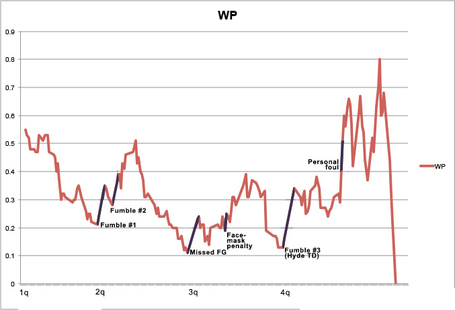 On five occasions, Purdue's mistakes increased Iowa's chances of winning significantly. Of these, the most significant was the third fumble, where the ball rolled, as if impelled by magic, right into the path of Micah Hyde, who took it in for a touchdown. That single play increased Iowa's chances of winning in the Advanced NFL Stats model from 16% to 34%. Given Iowa's offensive struggles on the day, it's hard to imagine they could have come back from a 24-10 deficit to tie the game without that fumble.

Luckily for the Hawks, Purdue did make all those mistakes, which led to a very interesting and controversial end of game situation. Iowa's chances of winning had risen all the way to 80% when they got a first down at the Purdue 42 with under a minute to play, but three plays later they had managed to move the ball just seven yards. With 21 seconds left to play, Kirk Ferentz was faced with three alternatives, none of which was very appetizing:

Iowa chose to go for it, which cuts against Ferentz's reputation for conservatism*, and we all know how it turned out: Iowa's defense allowed Purdue to move into field goal range far too easily, Paul Griggs made a 46-yard field goal, game over. But was going for it the right move?

Heading into that fourth and 3, Iowa had a WP of .68. If they had converted the fourth down to the 32, their WP would have gone up to .87. If they failed to convert, their WP would go down to .43. Alternately, if they had punted the ball to the 10 yard-line, their WP would have dropped to .5 (reflecting that the game would have most likely gone to overtime, which favors neither team). Just looking at how close the WP values are for punting and failing to convert, it's pretty clear that going for it is the preferred option here. It turns out that the break-even probability to go for it (rather than punting) is just 16%. In other words, if Iowa felt it could get those three yards 16% of the time or more, then they should have gone for it. If you assumed Purdue had a higher chance of getting the ball in field goal range and making the kick, then that might change things, but you would have to be pretty darned sure that they were going to do it. The upside for Iowa of getting that first down was so large that you would need to assume an equal upside for Purdue if Iowa failed -- in other words, that Purdue's WP would jump to around .87 if Iowa failed to convert. Purdue moved the ball pretty easily down the field, but I certainly wouldn't have put their chances of doing so (and making a long field goal) at 90%.

* Coach Ferentz was actually pretty good on making the right gambles. He smartly went for it on fourth down twice and converted once, leading to a touchdown, and he made the right call here. He did have a chance to go for it on 4th and 4 from the Purdue 38, and punted, which was probably a minor mistake, but overall he did a great job. All of which goes to show that good decision-making is no substitute for quality play.

In the end, If Iowa's offense had managed just three more yards or their defense had stopped Purdue from moving the ball 15+ yards on either of their plays, the game would have turned out differently. It was a very reasonable bet to make, it just didn't turn out well. The real problem was that Iowa's drive stalled in exactly the wrong spot on the field. Ten yards further back and the choice to punt would be obvious. Ten yards further up and the field goal would have been the way to go. The Hawks just found themselves in the heart of no-man's land against a stiff wind, and took the best of three bad options.

Of course, there was one other alternative: Iowa could have sent Mike Meyer out to make a 52-yard field goal into the wind. That would have been a tough kick without the wind, so I understand why the coaches shied away from that option. Just for the sake of argument, though, how confident would Iowa have needed to be that Meyer could make it for the field goal to be the better option? Making the field goal would have bumped Iowa's WP up to .95, while a miss would be just as bad as the failed fourth down conversion mentioned above -- .43. If we assume that Iowa had a 50% chance of converting that fourth down, then the average WP of that decision would be .65. A little arithmetic shows, then, that Meyer would have needed to make the kick 42% of the time or more for the field goal to be the superior option.

This actually raises an interesting question: did Iowa make a mistake by not choosing to defend the endzone that would have given them the wind in the fourth quarter? It's not clear in the play-by-play, but it appears that Iowa chose to receive the opening kick and Purdue chose the goal it would defend. If this is the case, then they might have given themselves a better chance on a last-second field goal by choosing differently after the coin flip. It probably wasn't a huge deal, though. There was a chance Iowa would have needed to make a crucial field goal at the end of the second or third quarters, too, and there's no reason to assume the game would have proceeded in an identical fashion had Iowa chosen differently to start the game. Still, given the frequent necessity of kicking field goals as time expires, it does seem like a prudent insurance policy to arrange the wind in your favor for the fourth quarter, at least on days when there is a strong and predominant wind (such as on Saturday).