The Lickification of Iowa Football

Why Iowa must dominate Indiana on Saturday.

Share All sharing options for: The Lickification of Iowa Football

So far, I hate this season.

It's not necessarily because of Iowa's record, though. There are two factors that have made this season, up to this point, nearly unbearable. First of all, I don't know who to blame. When any person gets angry at sports, it only makes sense to direct that anger at someone. The immediate reaction is generally to blame the player, like so:

"FUUUCK YOU VANDENBERG, WHAT THE HOLY FUCK KIND OF ASSHOLE PASS WAS THAT?"

If this continues, you can either keep coming up with new ways to insult the offending player and his teammates, or you may come to the conclusion that the problem is coming from above. So you re-direct your vitriol to the next person up the ladder, like so:

"HEY GREG DAVIS, YOU DONKEYFISTING CUNT ROLL, IF YOU CALL ONE MORE 3 YARD OUT ON 3RD AND 8, I WILL SHIT IN YOU!"

Once again, you can only threaten that so many times before you start to wonder if you've got the wrong man again. Perhaps you need to climb a little higher. It gets more difficult, though, as the next man up has been around for a long time. This means it gets harder to assign immediate blame, but sometimes you can't help it:

"YEAH THAT'S IT, FERENTZ, YOU FUCKING SCROTUM QUICHE, PUNT IT AGAIN FROM INSIDE THEIR 50!"

And so it goes.

Fans get mad. It's to be expected. I was shouting my dick off at the television in 2009 even when we were 7-0. But this year is different. This year when I tell Vandenberg and Greg Davis and Kirk Ferentz to go fuck themselves, I feel like I really mean it. I'm totally serious when I say I don't know who to blame, though, and that might be the most infuriating part about it. I read through the comments on here and it seems like everyone is pretty clear on who they think the culprit is. We have Greg Davis apologists and haters and Ferentz apologist and haters and Vandenberg apologists (they're out there) and haters. I simply don't know who to hate, and that's almost the worst fucking thing about this shithole season.

My wife recently told me that my gameday behavior has gotten out of control. Normally I would tell her she just doesn't understand football, but instead I took a good hard look at it and decided that she was right. And it all comes down to one core reason. This team is simply not fun to watch. Even the win against Michigan State was fucking painful to watch for 2 and half hours. And that, my friends, is a very dangerous problem.

Remember the other Iowa team that yielded subpar results mixed with a style of play that made games nearly unwatchable? 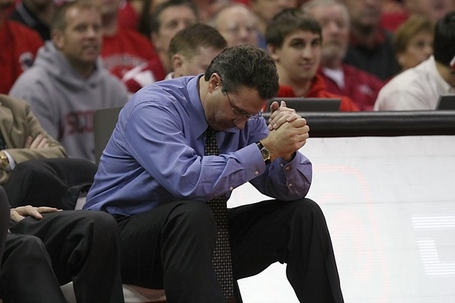 Maybe it starts with a bad hire.... 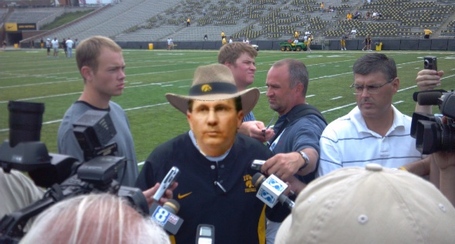 Now, one person can't bring the entire Iowa football program to its knees, right? Maybe, maybe not. But let's say the "problem" spreads to the rest of the staff. 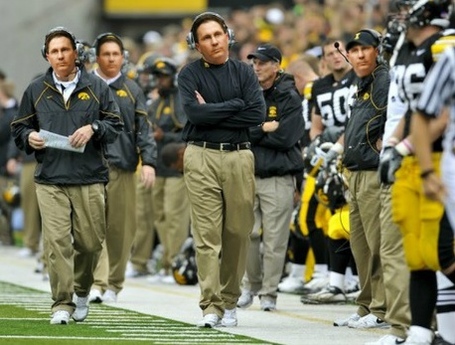 And since players are an extension of their coach, this problem is going to spread to the quarterback next. 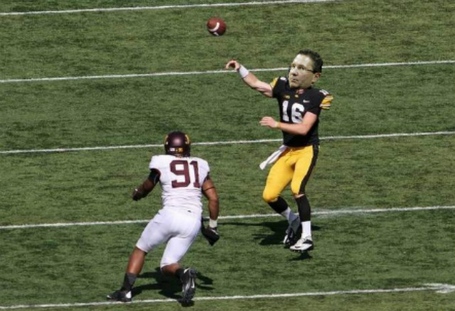 The quarterback is the field general. The leader. When he's broken, the team is broken. 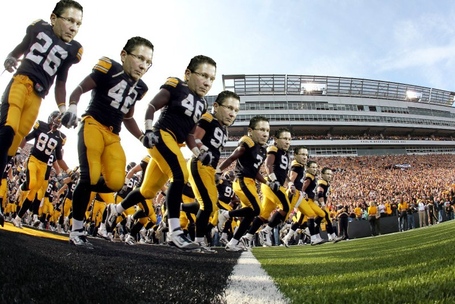 And when the team is broken, you start to lose the fans. 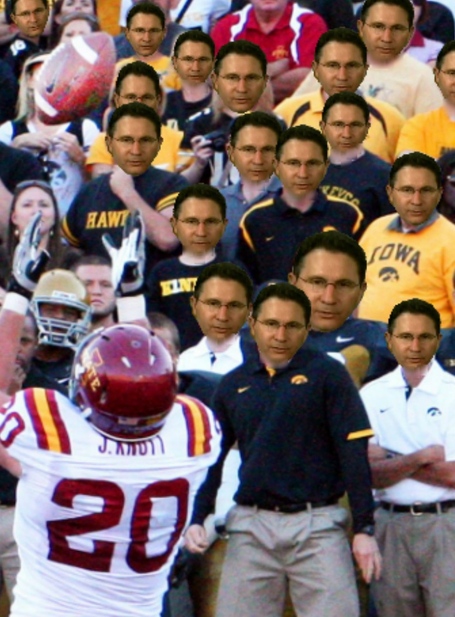 Even the young fans. 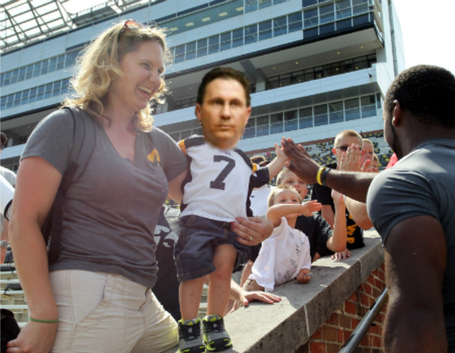 And everything spirals out of control. 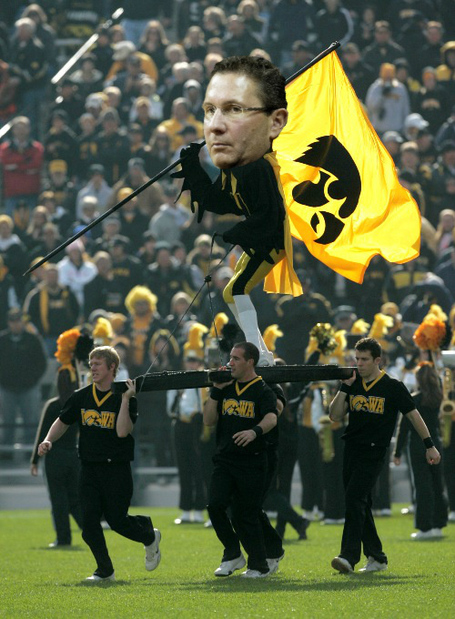 At this point, maybe you're thinking, "HEY, WAIT A MINUTE! This season hasn't been that bad! We're .500 in the Big Ten, we beat MSU and we crushed Minnesota. Remember that game, you fucker? That game was AWESOME! REMEMBER THIS PLAY? REMEMBER HOW AWESOME IT WAS?"

But even the sun shines on a dog's ass some days. 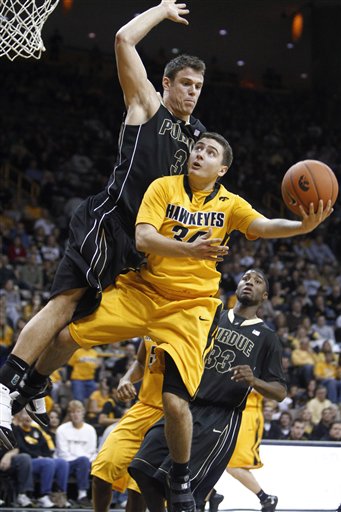 Luckily we're not there yet. This team has been brutal to watch, but the wheels have not yet come completely off. This weekend, they could. I’m not calling this a must win game. Partly because I think that term is stupid and completely overused, but moreso because I think it’s actually MORE than that. If the Iowa offense goes out and dumps buckets of shit all over itself for 3 quarters and the defense gives up huge plays, it won’t even matter if they somehow come back and win. I hate watching an inept team. I hate watching the other team complete 15 yard passes over the middle like it’s no big deal. If Iowa completed a pass like that I would have to assume it was divine intervention. I hate watching 3 yard outs on 3rd and 7. I hate punting from the opponent’s 38 yard line. I hate back-shoulder throws that land in the 9th row of seats. I seriously can’t watch that shit anymore. You know why? Because it reminds me of the Lickliter offense. It reminds me of passing the ball around the perimeter until there’s 2 seconds left on the shot clock and having someone jack up an off-balance 25-footer with a hand in their face. It’s unfuckingwatchable.

That's why Iowa needs to do more than just beat Indiana. They need to destroy them. They need to go up early and hang 40 points on them. The quarterback needs to be sharp. The wide receivers need to focus. The offensive line needs to steamroll everyone in their path. The running backs need to not tear any ligaments. The defense needs to play inspired and hungry and they need to swarm to the ball. This team needs to entertain us and they need to do it now. The Lickification of Iowa Football is a very real threat and it's a very slippery slope. 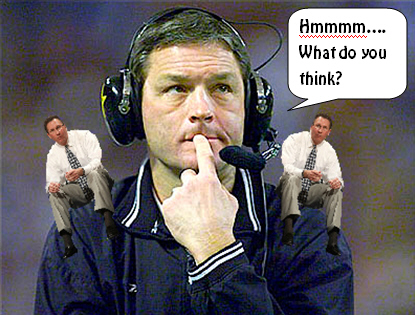 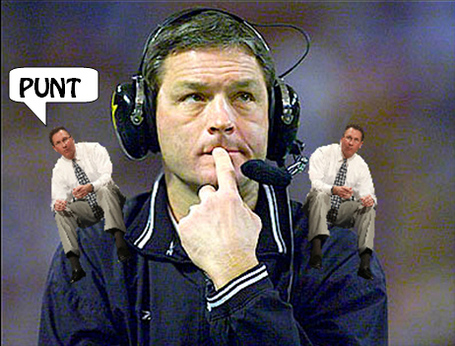 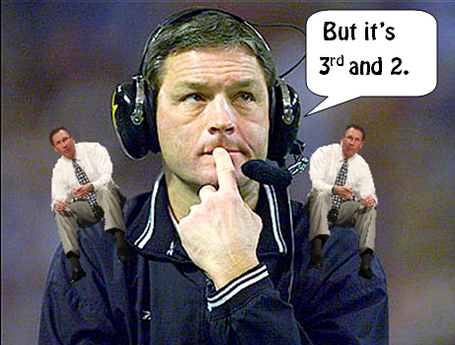 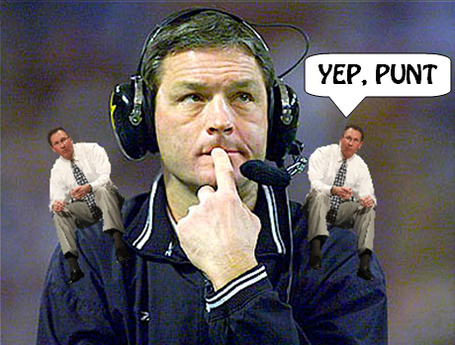