Something good, something bad... a little bit of both.

The pieces continue to fall into place for Iowa basketball's 2014-15 schedule.  As usual, Iowa's in a non-conference tournament this November -- this year it's the 2K Classic and while it doesn't involve a trip to a resort in Cancun or the Bahamas, it does involve a trip to the most famous basketball arena in the world (Madison Square Garden) and a solid set of opponents (Texas, Cal, and Syracuse).  But we didn't know who they would be playing until a few weeks ago:

2014 2K Classic first round matchups at Madison Square Garden: Texas versus Iowa and Syracuse against Cal, per release.

We also found out some TV and date information for the upcoming season:

Times and TV information out on ACC/Big Ten Challenge. Iowa-North Carolina at 6:30 Dec. 3 on ESPN

Two Iowa hoops game on ESPN Super Tuesday, both on the road. At Wisconsin Jan. 20th and at Indiana March 3rd.

And now we have the full (or almost-full) schedule, courtesy of Hawkeye Sports.

We'll get to the conference slate in a bit, but I'm more interested in discussing the schedule that Iowa has more control over, which is the non-conference slate. 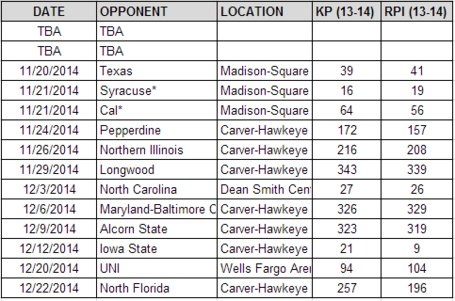 Now, this is not a complete schedule.  This only covers 11 opponents (I listed both Syracuse and Cal but, again, Iowa will only play one of those teams) and we know Iowa will play more than that in the non-conference portion of the season.  Those remaining two games will be tied to the 2K Classic as "preliminary" opponents -- think the games versus Abilene Christian last year or Gardner-Webb two years ago.  They have no bearing on the neutral site tournament itself and they probably won't be very good.  But they may not be particularly terrible, either.  Here's a breakdown of the preliminary opponent teams for the 2K Classic over the last three seasons. 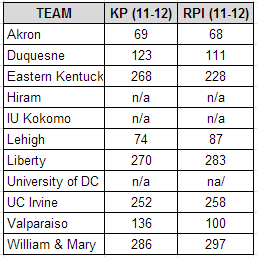 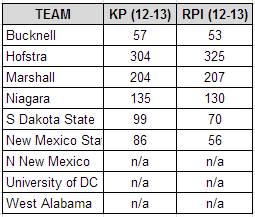 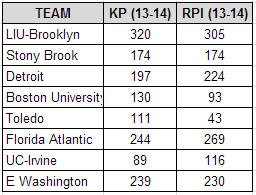 There's always a few crap teams in there, like Hofstra or LIU-Brooklyn, but there have also been a lot of perfectly decent non-conference mid-major teams that rank in the RPI 100s or so.  (They hit the jackpot two years ago and wound up with a trio of future NCAA Tournament teams -- Bucknell, South Dakota State, and New Mexico State.)  Playing those teams wouldn't be so bad.  If Iowa can avoid the 1-2 absolute dogs that are likely to be part of this preliminary field, that would be nice.

In fairness, the level of control Iowa is able to exert over their non-conference schedule is somewhat limited.  They were selected to play in the 2K Classic, but they can't control whether they play Texas, Syracuse, or Cal. (Well, they can exercise some level of control over whether they play Syracuse or Cal, but you know what I mean.)  The North Carolina game is part of the Big Ten-ACC Challenge, the match-ups for which are dictated by the Big Ten, the ACC, and ESPN.  Iowa plays Iowa State on an annual basis as part of a long-term contractual arrangement between the two schools.  Iowa is playing UNI this year because they have a short-term contractual agreement to play Drake and UNI in alternating years in the Big Four Classic; this year it's their turn to play UNI.

So in the games that the Iowa athletic department actually had control over the schedule, they set up games with the following opponents:

This is... not great.  Longwood was one of the absolute worst teams in Division I last year (4-24, RPI: 341).  Maryland-Baltimore County (9-21, RPI: 319) and Alcorn State (12-19, RPI: 308) weren't much better.  This should not have come as any surprise, though, because none of those teams were any good the year before.  Or the year before that.  Or the year before that.  Or... well, you get the picture.  Those three teams have been RPI 300 teams in each of the past five seasons.  Over that span, Longwood has an average RPI of 322, Maryland-Baltimore County has an average RPI of 323, and Alcorn State has an average RPI of 326.  (Northern Illinois' recent history isn't much better; while they were semi-frisky last year en route to a 15-17 record and a 201 RPI, their five-year average RPI is still a dismal 290.)  These teams were not good a year ago and have not been good for quite some time.  Past results may not perfectly predict future outcomes, but I feel comfortable in relying on the strong commitment to sucking that these teams have exhibited over the past five seasons.  They're almost certainly going to suck again this year.

Of course, this is nothing new for Iowa basketball. In case you've forgotten, this is what Iowa's non-conference schedule looked like a year ago:

Look at all those sickeningly-sweet cupcakes, loaded up with obscenely large RPI figures.  In fact, non-conference schedules like this have become all-too-common over the last few years.  It was one thing to load up the non-conference schedule with the scrapings from the bottom of the Division I barrel when Fran first arrived at Iowa; he inherited an Iowa team weak in talent, confidence, and any experience of winning basketball games.  Establishing a winning mindset was an important first step and if that meant scheduling a bunch of crap teams, well, so be it.

But this Iowa team isn't the sad-sack outfit that Fran inherited five years ago.  This team has talent.  It has experience.  It's won games.  Quite a lot of games, in fact -- 20+ wins in each of the past two seasons.  This team has tasted the postseason -- gorging on the NIT in 2011-12 and 2012-13 and getting a brief sampling of the NCAA Tournament in 2013-14 -- and wants more.  Schedules like this actively hurt that ambition.

To be clear, there is some definite quality on this non-conference schedule.  Iowa State's resurgence over the past four seasons has again turned them into a high-quality non-conference opponent, as they so often were in the 1980s and 90s.  Texas and (potentially) Syracuse could provide some excellent opportunities for Iowa to claim a high-profile non-conference win.  (And even a win over Cal would likely be a solid addition to Iowa's portfolio come March.)   The B1G-ACC tilt with UNC could also be a big opportunity for Iowa, especially since it's in Chapel Hill; if Iowa can score the upset and UNC lives up to their usual standard, that could be a tremendous win for Iowa.  Even UNI could wind up being a very solid non-conference opponent if they manage to improve on last year's middling results.  But the gems in this non-conference schedule are surrounded by too much dross.

The reason we harp on these schedules -- and, in particular, the continuing presence of absolutely awful teams like Maryland Eastern Shore and Longwood -- is because This Shit Does Matter.  We know that RPI is a flawed metric.  We also know that the NCAA does not give a shit about those flaws and continues to give it considerable importance during the NCAA Tournament selection process each March.  Thus, it becomes important to know how to work the RPI formula to your advantage.  At this point, Iowa is either incapable of doing so -- or doesn't understand the importance of doing so.  I'm not sure which scenario is more depressing.

Statsheet has a nice explanation of the RPI formula:

There's always a counter-argument to this hand-wringing about Iowa's lousy RPI numbers that says if the Hawkeyes just took care of their own business and won more games, then this wouldn't be an issue at all.  There's something to that, certainly.  Losing 12 games in regular season and conference tournament play -- which is what Iowa has done each of the last two season -- is certainly a problem and the sort of thing that's going to move you into bubble status.  If Iowa wins just 2-3 more games in each of those seasons, they aren't sweating Selection Sunday quite so much.  That's all true.  However, there's also no reason that Iowa can't work the RPI formula better in order to give themselves more of a cushion if they do experience a few more losses than anticipated.

They should also be motivated to work the RPI formula better to boost their RPI ranking because RPI plays a role in determining how teams are seeded, too.  Getting an invitation to the Dance is the most important consideration, but getting a better seed sure doesn't hurt, either -- there's a real advantage to being a 6- or 7-seed as opposed to being an 8- or 9-seed and goosing your RPI numbers can help a team reap that advantage.

Unfortunately, so long as Iowa keeps scheduling so many teams that are absolute RPI kryptonite -- aka, teams in the 300s of the RPI rankings -- they're not going to be able to see that advantage.  This is a better schedule than a year ago -- there are more potential RPI top 50 and top 100 opponents and slightly fewer pure crap opponents -- but it still seems to be unnecessarily harming Iowa's RPI numbers.  (And this complaint is purely RPI-based; it says nothing about the fact that opponents like this may not do much to adequately prepare Iowa for tougher games later in the season or induce fans to show up at Carver and buy overpriced concessions.)