Who would you choose?

If you're on the Twitters, you may have seen this floating around:

It's a pretty irresistible way to kill some time if you love basketball.

So we figured: why not create an Iowa hoops-specific version?  With thanks to @Ballislife for the idea, here we go: 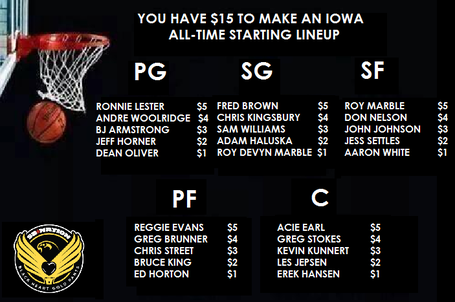 Ronnie Lester: Career stats don't  fully tell the story of Lester's greatness; he was an integral part of some of the best Iowa teams of all-time, as well as being a two-time first-team All-Big Ten player AND a two-time All-American.  Oh, and Magic Johnson once called him the best player he ever played against.

Andre Woolridge: Dre was also a two-time first-team All-Big Ten player, as well as an All-American -- and a man who we still believe was screwed out of Big Ten Player of the Year honors in '97.  He owned Iowa's all-time mark for assists (575) until Jeff Horner came along, and probably would have put the record out of sight if he'd been able to play all four years at Iowa (his 5.9 career apg rate is easily best in school history).

BJ Armstrong: BJ led a few good Hawkeye teams of his own and picked up a pair of second-team All-Big Ten honors of his own.  He's also top ten all-time in assists and steals, and top-five in scoring.

Jeff Horner: Horner is Iowa's all-time leader in assists (612) and earned third-team All-Big Ten honors (and honorable mention All-America plaudits) in 2006.  He also made (262) and attempted (713) more three-pointers than anyone in Iowa history.

Fred Brown: "Downtown" Freddie Brown may not be well-known among younger Hawkeye fans, but he was one of the most prolific scoring threats to ever lace 'em up for Iowa (27.6 ppg, 662 points in 1971).  Put it this way: he's a member of the 1000 points club at Iowa... and he only played two seasons.  He earned All-Big Ten (second team) and All-America honors in 1970.  And he had a sweet, sweet afro.

Chris Kingsbury: Kingsbury doesn't top many of Iowa's career records charts and he "only" earned second-team All-Big Ten honors (in 1995), but stats and awards are only a small part of the legend that was Kingsbury. The King still has the records for most three-pointers made (117) and attempted (297) in a single season, but again numbers alone don't tell his story.  If you saw him play or heard stories about him, you know why he's here.

Sam Williams: Williams kind of falls in the same "unheralded great" category as Brown, but he was another guy who scorched the nets while he was at Iowa (25.3 ppg, 632 points in 1968; almost 1200 points in two seasons).  He also earned All-America honors in 1967-68, as well as first-team All-Big Ten recognition those same years (and was named Big Ten MVP in 1968).

Adam Haluska: Haluska was the last Iowa player to earn All-America consideration (in 2007), as well as the last first-team All-Big Ten player from Iowa until RDM this year.  Haluska was one of the most efficient perimeter scorers in Iowa history, as well as a good all-around player.

Roy Marble: Iowa's all-time leading scorer?  Perhaps you've heard of him.  He earned second- or third-team All-Big Ten consideration in 87-89.  He was insanely consistent: he scored in double figures every season at Iowa (11.5, 14.9. 15.4, and 20.5 ppg) and nearly scored 500+ points in three of his four seasons.  He wasn't half-bad at rebounding or grabbing steals, either.

Don Nelson: More famous as a coach, but Nellie was a heckuva player, too.  He averaged a double-double every season at Iowa and scored 20+ ppg his final two years here, which helped him earn All-America and All-Big Ten nods in 1961-62.  Nellie could flat-out ball, y'all.

John Johnson: Another entry in the "old but not forgotten" class.  Johnson put together the most prolific scoring season in Iowa history (27.9 ppg, 699 total points in 1970) and might just own the Iowa scoring records if he'd actually played all four seasons at Iowa.

Jess Settles: Ah, the ageless one.  Sure, the fact that he played forever (seemingly) is one reason why his name is scattered all over the top ten in various statistical categories (points, rebounds, steals, made field goals, three-point attempts, etc.), but the other reason is that he was really good.  If injuries hadn't diminished his last few years at Iowa, he'd probably rank higher here.  As it is, he still earned multiple All-Big Ten nods and was an honorable mention All-America (1996).

Aaron White: Dunk L'Orange is the only active player on here, but he's had himself a very strong career so far his per-game numbers are very solid), culminating in some third-team All-Big Ten love after this most recent season.  He's also got a great nickname and been part of countless highlight-reel plays.

Reggie Evans: Reggie Evans was basically Godzilla on the boards (11.5 rpg, which is elite in the modern era), which he parlayed into second-team All-Big Ten honors in 2001-02.  He has two of the three greatest rebounding seasons in Iowa history (416 total, 12.8 rpg in 2001; 378 total, 11.1 rpg in 2002) and cracks the top-ten all-time despite only playing two seasons at Iowa.  He was also the Most Outstanding Player in the 2001 Big Ten Tournament, which is probably still the high point of Iowa hoops in the last 15 years.

Greg Brunner: The Most Interesting Hairline in Iowa History was also a damn good player, as evidenced by his status as Iowa's all-time leading rebounder (990 total, 7.8 rpg) and his All-Big Ten honors ('06 first team, '05 second-team).  Also a good scorer and not half-bad at assists, either.

Chris Street: It's tough to quantify Chris Street, thanks to his tragically shortened career.  Despite his status as one of the most beloved players in Iowa history, he doesn't rank all that highly in statistical categories and he didn't earn any All-Big Ten (or All-America) honors, although given the trajectory of his career and the level he was playing it when he passed away, it seems almost inevitable that he would have received that recognition if he'd hadn't died.

Ed Horton: A steady performer who improved every year he was at Iowa, ultimately finishing near the top-15 in points (1372) and top-3 in rebounding (877).

Greg Stokes: Honestly, it was pretty close between Stokes and Earl for the top spot in the center category.  Which is no surprise, given their standing in various statistical categories (Stokes is #3 in scoring, #7 in rebounding, and #2 in blocked shots... albeit a fairly distant #2).  Stokes was also second-team All-Big Ten in '83 and '84, and first-team All-Big Ten in '85.

Kevin Kunnert: Not well-known, but a good player nonetheless.  Kunnert earned some All-America attention in 1973, as well as second-team All-Big Ten honors in 1972-73.  He scored 1100 points in three seasons -- and also topped 900 rebounds.  In fact, he owns the highest career rebounding average (12.7 rpg) in Iowa history.

Erek Hansen: No All-America or All-Big Ten love for the lanky South Dakotan, but he was Big Ten Defensive Player of the Year in 2006 and he ranks third all-time in blocked shots (212).

Alright, those are the players.  Who ya got?