While he may not have been the most efficient scorer, Mike Gesell did add a couple nice things to his game this year that should prove to be positives for his development going forward.

Share All sharing options for: 2013-2014 SEASON IN REVIEW: MIKE GESELL

Mike Gesell is one of the players on this roster that I think a lot of people are letting a freak end-of-season collapse paint him in a negative light for next year. People are already talking about Trey Dickerson coming in and starting right away, and while that may be a possibility (no one knows what the starting lineup will be come November), let's just hold on a minute, shall we? First, Dickerson has yet to play a single game above the junior college level, and second, Mike Gesell has two years of experience starting at the point guard spot at this level, and he's been pretty good himself.

What I think we've all come to realize, is that Gesell is not exactly a lights out shooter. He's more of an average shooter from the floor, and should probably be expected to put up an eFG% in the neighborhood of 48% moving forward. But, what we've also seen is that he can get his points when Iowa needs him to. It may not always be the most efficient display of scoring, but he is capable of giving Iowa double-digit points on any given night. In addition to that, he also took the next step that we all dream of a point guard taking from season one to season two: he upped his assists and he cut down on his turnovers. He also showed the ability to blow by his man and get himself in the paint this year, which was a very welcome sight. I'll go over all that in a bit, but I just wanted to get that right out of the way. Gesell had a rough year shooting the ball (in March, especially), but he brought other things to the table that were just as valuable to this Hawkeye squad.

The Season in Review

Gesell started the season off ho-hum. He did a little bit of scoring, but the team did not really need him to be a consistent offensive threat during the non-conference portion of the schedule, and he was fine to take the occasional shot while running the offense and finding the open man. And even when it came time to start playing Big Ten teams Gesell was actually pretty good. That is, until the calendar flipped to March. 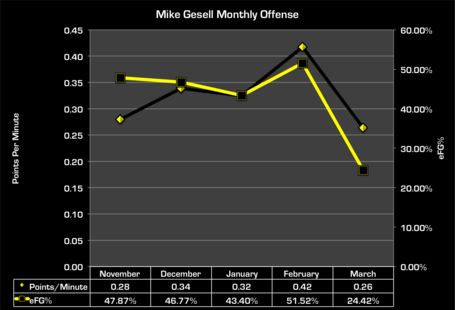 As you can see, his January was pretty par for the course, and his February was freaking spectacular, but that March, woof. And looking at his assists and turnovers, we get a somewhat similar picture, too. 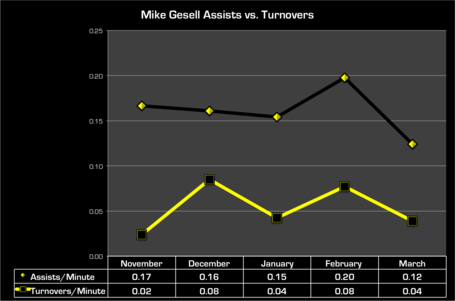 This chart makes his February look even more amazing, as Gesell scored with relative ease and was also getting the ball to his teammates in a position to score. The turnovers spiked a bit in February, but that was still probably the best month of his young career thus far. Again, we have March, though. And while we could excuse his drop in assists as resulting from the fact that his teammates couldn't hit water falling from a boat in March, there is nothing nice we can say about his shooting; it was just downright terrible in the final five games of the season. 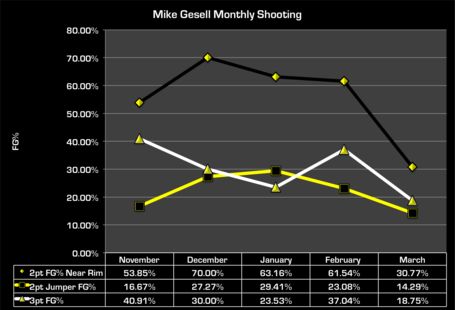 Every shot in Gesell's arsenal absolutely deserted him in March. I mean, almost everyone has a stretch where they shoot 14% on their long twos, but 31% on shots near the rim? Wow, that's some serious bad luck. And going 3 for 16 in the month of March from downtown is some crappy luck as well.

But let's not focus on the month of March. It was bad for Gesell, just like it was bad for the rest of the team. And there is nothing we can really point to besides bad luck for Iowa's starting point guard during that five game streak. It happens. Instead, January and February gave us a bigger sample of games, and Gesell manned the point very well for Iowa during those two months. In fact, those two months were good enough to make his overall conference stat line this year look much better than last year. And in conference play, Gesell did the opposite of what we saw Jarrod Uthoff do against Big Ten teams this year, in that he actually put up 1.5 of his win shares against the harder portion of the schedule, compared to just 0.9 win shares against the non-conference part of the schedule. He may have shot about 3% worse in Big Ten play, but his assists didn't fall off and his turnovers only went slightly up. He went from adding about 11% worth of a win's value every 40 minutes in non-conference play, to adding about 13% in conference play; that's a slight increase over last season, despite shooting worse. All in all, I call that a successful season. 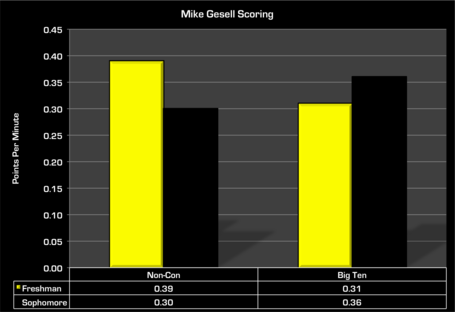 If we look at Gesell's points per minute over his career thus far, he had a fairly typical freshman fall off, but showed improvement in his sophomore year, despite his shooting slump to end the season. This year, Iowa didn't really need his scoring abilities all that much at the beginning of the year, but it was nice to see him show that he's a willing scorer against tougher competition if Iowa needs him to be. 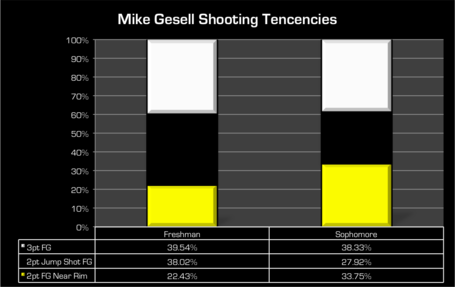 One of the very positive developments of Gesell's game this year was him demonstrating an ability to get by his man and get to the basket more often. Gesell showed that he was capable of breaking his man down off the dribble and getting into the lane, and he was able to do so against Big Ten defenses. That's a trend that I hope carries over to next season. 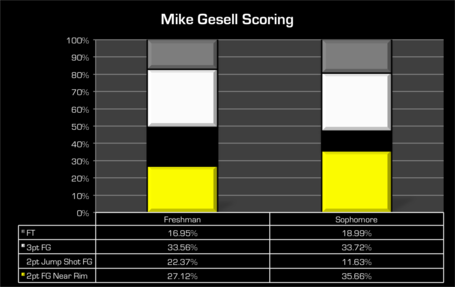 WIth his change in shooting tendencies, he also saw his percentage of points near the rim go up and his points from long twos go down. That's a good thing, but... 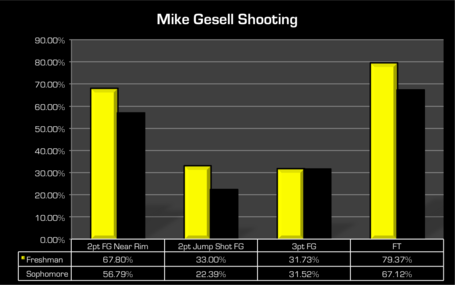 Gesell had trouble finishing near the rim more than he did in his first year on campus (Thanks, March!). That drop off was the main reason his shooting dipped to lower than his freshman season. His two point jump shots were down too, and that also didn't help, but if he continues to shoot closer to the rim at a higher rate, his shooting will most likely be better next season. Basically, the process was sound, but the results just didn't pan out.

As for those free throws, I have no idea what happened there. I'm hoping that's a statistical anomaly and he shoots better from the line next season. I don't see why he shouldn't. 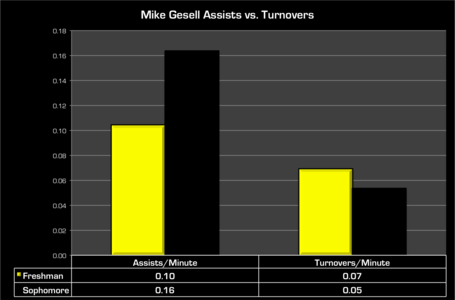 This is where Mikey G. made the biggest jump in his game. His assists per minute this year were a career high and his turnovers per minute were a career low. That's what you like to see out of your team's starting point guard. Kenpom put his 28.6% assist rate at 106th in the country this year, while his turnover rate dropped from 20.5% last year to 15.6% this year. 15% wasn't good enough to be ranked by Kenpom, but it's basically middle-of-the-road.  For much of the season, Iowa didn't need Gesell to be a scorer, but they did need him to be a facilitator and he showed that he was definitely up to that task.

First and foremost, I think we would all like to see Gesell shoot the ball a little better next year. He's not going to be a Nik Stauskas-like shooter, but getting his eFG% up to something like 48% or so would be adequate and definitely within his reach. Honestly, though, his process looked better than the results show this year. If he continues to take a third of his shots near the rim then his shooting is likely to regress upward from that alone. However, it's also not hard to picture Gesell shooting 33-35% from three point range next year, and that would obviously also help his shooting go up. But when it comes to scoring, it's hard to tell if Gesell's points per minute will go up next year or not. Gesell has the talent to put up over 0.40 points per minute during the course of a season, but will Iowa need him to do that? If his points per minute is still in the mid 0.30s next season, it's probably because he's scoring when Iowa needs him to, but the Hawkeyes still have enough options that he doesn't need to be a main one.

Of course, he also brings value to this Iowa team by being able to distribute to his teammates in scoring position and by facilitating the offense without handing the ball to the other team. If his assist rate can at least stay at this past season's level and he can chip away at those turnovers even more, that would be a welcome sight. As for defense, he's shown two years in a row that he can pick the other team's pocket. In his freshman year, Kenpom had his 2.8% steal rate at 350th in the country and last year his 3.1% was good for 150th. Yes, part of the problem down the stretch for Iowa's defense last year may have been their penchant for gambling, but Gesell showed he could force turnovers during his freshman year as a part of a good defensive team. Essentially what I'm saying is that let's all hope for another high steal rate from #10, and a better overall team defensive performance from the Hawkeyes.

Overall, I think Gesell had successful season this year. After struggling as a freshman in Big Ten play, he showed this year that he was capable of being a very good Big Ten starting point guard. He's not going to set the world on fire with his shot, but he does plenty of other valuable things for this team. So while many of us are excited for the arrival of Trey Dickerson (myself included), let's also enjoy what we have in Gesell. He's a fine player and he's going to be fun one to watch for two more years.

Up Next: Adam Woodbury