After taking yet another step toward reaching his full basketball potential this year, Olaseni's further development is key for how far this Iowa Hawkeye team can go next year.

Share All sharing options for: 2013-2014 SEASON IN REVIEW: GABE OLASENI

As a baseball fan, one of the things I enjoy about the sport that is unique to other major sports is the vast minor league system that is in place. Like every other sport, there is an annual draft, but unlike other sports, there is also an international signing period. Every year, major league front offices utilize their scouting departments and hand young international players from all over the world (but mostly Latin America) pretty large sums of money to come play in their minor league system in hopes that they will become eventual major league contributors. Much of the time these players are still in their teens and still require a lot of development in order to one day play against the best in the world. Sometimes the gamble pays off and sometimes the player is an absolute bust. And by now you're probably wondering why I am talking about baseball in a post that is supposed to be about Gabe Olaseni. Well, I like to think of Olaseni as being like that toolsy prospect your favorite baseball team signs and hopes blossoms into a future all star. He's got all the tools to be a great player, but he's still learning the game. Fortunately for us, he's shown improvement every year and definitely hasn't been a total bust.

Abodunrin Gabriel Olaseni, or "Gabe", as we all better know him, is fairly new to the game of basketball. As a 6'2" 14 year old, Olaseni stopped playing soccer and picked up a hoopyball, pretty much changing the entire course of his life. Getting such a late start on the game can be a bit of a hindrance to some players, but with a tall athlete like Gabe, it only gives people more to project on. When he first arrived on campus he probably should have redshirted his freshman year (can you imagine two more years of him?), but Iowa didn't really have that option, seeing how Andrew Brommer and Devon Archie were the only other centers on the roster. In his freshman campaign, though, Olaseni immediately proved to have a knack for blocking and altering shots and for pulling down rebounds in short stints on the floor. It was his offense, on the other hand, that still needed some polishing. And unlike those minor league prospects who have all the tools to become a perennial MVP with a baseball bat, but end up doing nothing but whiffing on curveball after curveball, Olaseni has shown improvement in his offensive game every single year that he's been at Iowa. Essentially, he's given us no reason to believe that the sky isn't the limit for the Hawkeyes' big Brit.

The Season in Review

Thanks to Gabe's raw athleticism, we were expecting things to continue to progress this year. Excitement and expectations were difficult to temper even before the season started, as Fran McCaffery came out and called Olaseni the most improved player on the team for the second straight year. We immediately saw some positive signs during the non-conference portion of the schedule. For one, Olaseni proved to be able to sustain his rebounding and blocked shot numbers in increased time on the court and even better, he averaged 0.41 points per minute against non-conference teams which was an increase from 0.29 as a sophomore. Surely, though, he would see a bit of a drop off once Big Ten caliber big men started coming to town, right? Yeah, not quite. Instead, Gabe picked the conference portion of the schedule to hold his coming out party. After putting up effective field goal percentages of 40% and 50% in November and December, he came back with 55.56% in January and 64.29% in February. What was an even more pleasant development, was the fact that big #0 wasn't just getting it done shooting from the field, he was also a foul-drawing machine. 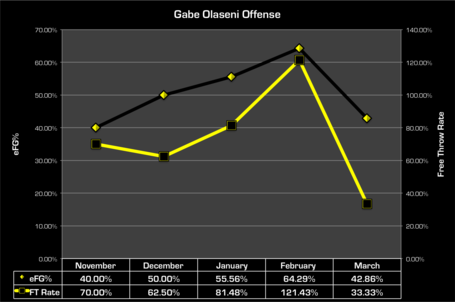 Ignore March for now. Instead, look at January and February. Olaseni was converting from the field at an efficient rate and picking up fouls on his defenders left and right. I mean, look at that February. He attempted 34 free throws that month compared to 28 field goals. He ended January with 0.43 points per minute and topped that in February with 0.50. This was offense the likes of which we had ever seen out of him. This was what we had dreamed our toolsy prospect was capable of, but we were never 100% sure that he could put it all together.

Olaseni's play was so good that Fran had no choice to but to give him more minutes. 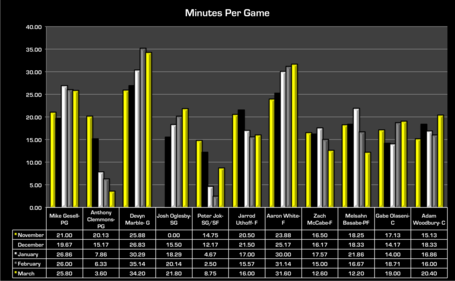 He went from playing sparingly in year one, to 11 minutes per game in year two, and in year three had progressed to the point that he ended the season averaging 19 minutes on the court a night.

But let's now talk about that end to the season. As you could tell by the first chart I posted, much like the rest of the team, March wasn't particularly kind to Olaseni on the offensive end. His shots stopped falling at such a high rate and he stopped getting to the charity stripe. He was still taking 71% of his shots near the rim (though he did take 80% in January and February), the problem was that he just wasn't cashing in on them like he had most of the season. 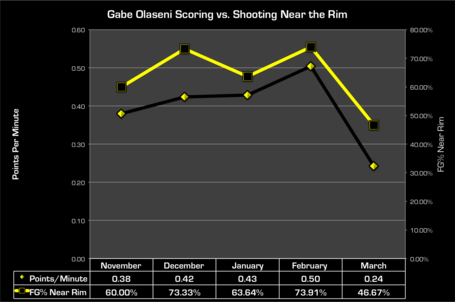 Since Gabe's offensive value is tied up in how well he shoots down low, it's not surprising that his points per minute follows closely with his shooting near the rim. However, getting fouled and making his free throws could have helped offset that in March, but as we saw with the other chart, he just wasn't getting whistles in the final month.

Yet despite becoming infected with whatever poor shooting disease was going around the team in the month of March, Olaseni had a breakout season this past year. As previously noted, he proved capable of continuing to be an outstanding rebounder and shot alterer for longer periods of time on the court. His offensive rebounding rate was 6th best in the nation, according to Kenpom, and his blocked shot rate was 64th in the nation. The blocked shot rate wasn't the best of his career (though it wasn't far off), but his offensive rebounding rate was easily a career best for him. And speaking of career bests, Olaseni also blew away his previous high in offensive rating, going from a Kenpom listed 108.6 last year to 120.2 this year and a set a career high in win shares, upping last year's 1.5 win shares to 2.6 this season. He also put up a career high free throw rate this season by 20 percentage points, and though his 50% eFG% this year was slightly behind last year's 52.1% (but in more attempts), his true shooting percentage of 56.8% was slightly better than last year's 56.2% because he knocked down 73% of his free ones this year. And one final thing to note, was the fact that Olaseni's usage rate (an estimate of the number of a team's possessions a player is responsible for ending while on the court, whether it be a field goal or free throw attempt or a turnover) went from 14.1% last season to 19.5% this season, all while cutting down on his number of turnovers (another career best!). What that tells us is that Gabe was a bigger part of the offense this year, as he was responsible for more scoring attempts than in seasons past. The fact that he was just as efficient as he's ever been, despite playing a much bigger role in the offense makes me extremely excited for next year. 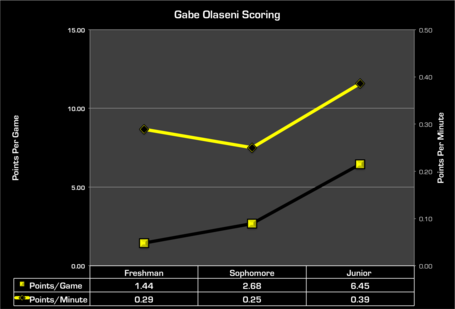 Gabe has pretty much been the poster boy for positive linear career development thus far. He went from an offensively-challenged freshman who only played in 18 games all year and averaged 5 minutes per game, to a junior who played about 20 minutes per game and showed some genuine offensive ability. 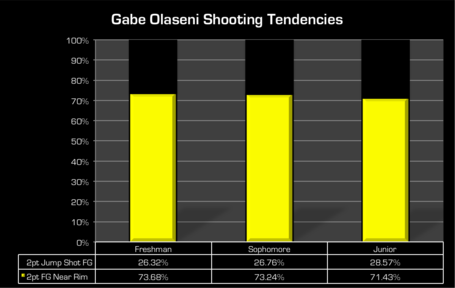 Gabe has been consistent in his shot selection throughout his career. Basically 3 out of every 4 shot attempts comes near the rim. Although, he did seem to start experimenting more with a longer range jumper this year; usually from the baseline. 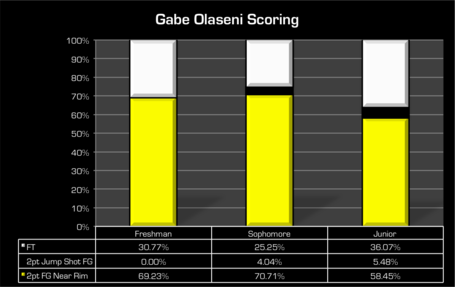 Here we see just how much of Olaseni's offensive value came from the free throw line this year. His percentage of points coming from shots near the rim went down mostly because of his increased presence at the charity stripe and his increased ability to knock them down. 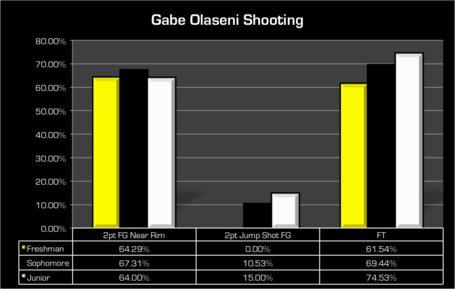 When we look at shooting, we see that Olaseni is fairly consistent around the rim. His ability to convert from a little further out has also gotten better year after year, while his free throw shooting percentage this year was probably higher than we all ever expected it to get. I'm interested in whether or not he can sustain a +70% free throw shooting percentage next season or if he goes back into the high 60s. 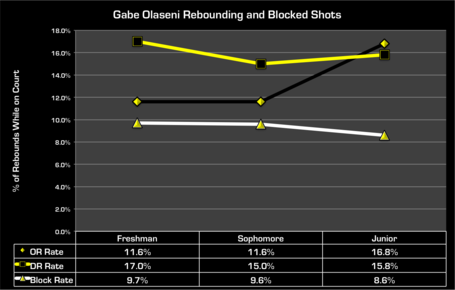 With one year left in the black and gold, Gabe Olaseni has the opportunity to sink his draft stock or send it skyrocketing. He's kind of a poor man's Joel Embiid (clearly not as good and without the same ceiling) in that both of them started playing basketball later in life and both have some pretty amazing athletic abilities that have clearly translated well to the hardwood. No matter what happens next season, though, I think Gabe at least gets a look in the NBA D-League as an undrafted free agent. He has height, defensive talent, and raw athleticism that allows him to do things like this:

(Courtesy of PSD, once again.)

But if he explodes again next season and can do it from start to finish, he has a chance of busting onto the draft board. DraftExpress currently has him ranked as the 57th best junior in the country, but that list contains names that are jumping ship for this year's draft, meaning that he should move up on the top senior list next year. What would help him take that final step? Well, developing a more consistent post game would be one thing for him to do on offense. He's the king of cleaning up on the offensive glass and finishing alley-oops, but he still seems inconsistent at times when making post moves and trying to finish on little jump hooks further away from the basket. At times he flashes brilliance, and other times he still looks raw. But showing improvement in that aspect of his game, in addition to continuing to crash the boards, blocking shots, and playing all around good defense would make him at least a second round draft pick.

Honestly, I don't know what to expect from him next year. I don't really expect him to take a step back, but I am interested to see just how much of a step forward he can take in his senior year. Olaseni is a real wildcard for next year's team. This squad already looks like it should be pretty competitive next year, but Olaseni taking another step forward could mean the difference between Iowa being a middle-of-the-pack team or the Hawkeyes being a top-of-the conference team. The sky's the limit for the Hawkeyes' center from across the pond. He has all the athleticism in the world, he just needs to keep polishing that athleticism so it continues to turn into true basketball talent.

Next Up: Jarrod Uthoff