I don't particularly care how, just win this game for the seniors.

Share All sharing options for: PRE-GAME FRANALYSIS: IOWA VS. ILLINOIS

Here's your statistical preview for the Illinois game. I recommend using it to supplement Pat's Franimal Planet preview, which will be up later. 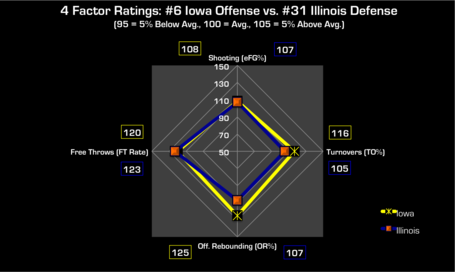 Iowa's offense continues to hold steady at 6th in the nation with an OE+ 15% above the national average. It's a good thing that this isn't the unit that hasn't been failing the Hawkeyes in recent games because Illinois' defense is no slouch. Sitting at 9% above average in DE+, the Illini defense matches up well with Iowa in terms of shooting and keeping their opponents off the free throw line. The advantage for Iowa in this game comes in not turning the ball over and grabbing their offensive misses and turning them into second chance points.

Illinois is most likely going to do their best to keep Iowa from breaking out in transition. If the Hawks are able to get out and run, this will most likely help give them the advantage in shooting and free throw rate, as layups have a higher conversion rate and fouls tend to happen more in transition. Iowa has a decent advantage on this side of the ball, but they should have a much bigger one if they can play their typical brand of run-and-gun basketball.

When Illinois Has the Ball 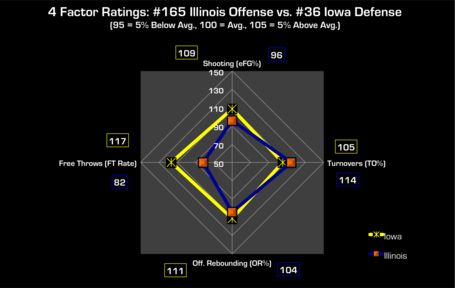 If any offense can alleviate Iowa's defensive woes it' this Illinois one. I mean, besides Northwestern's 8% below average tire fire of an offense, Illinois' 1% above average is the second worst in the Big Ten and #165 in all of Division I. Iowa's defense, of course, continues to slide down the rankings, and has been nothing to write home about recently either. After a second half against Michigan State where the defense yielded 1.43 PPP, Iowa's defense moved from #32 to #36 in the country. Also, their streak of allowing an offense to score average over 1.00 PPP has now been extended to 10 games. Bleh.

Luckily for Iowa, Illinois can't shoot and they sure as hell can't get to the free throw line. They can kind of grab offensive rebounds, but even that has seen a drop off in Big Ten play. The one thing they are good at, though, is keeping possession of the ball. The fewer turnovers they have, gives them that many more opportunities to put the ball in the cylinder. And, with the way this team shoots, they need all of the opportunities they can get.

(For a closer look at personnel, UMHoops has a nice preview from before their game with Illinois earlier this week. It also includes a nice shooting chart for Kendrick Nunn, who looks to be very annoying for years to come.) 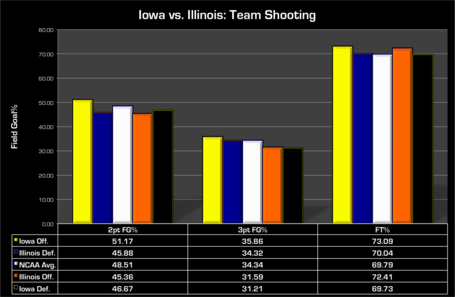 Iowa's offense has a distinct advantage in shooting from the floor, but the Illini are able to hang better at the free throw line.

Meanwhile, on defense, Illinois closes the gap. Although, it should be mentioned that Iowa's defense looks really good on this chart, but thanks to the recent 10 game defensive collapse, their 2 point FG% is now up to 50% in Big Ten play, while the the defensive 3 point FG% is up to 35%. Yikes. 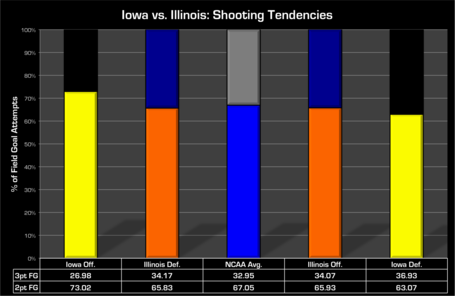 As we all know, Iowa will look to push the pace and get into the paint. Illinois, on the other hand, is going to be more perimeter-oriented. Business as usual, in other words. 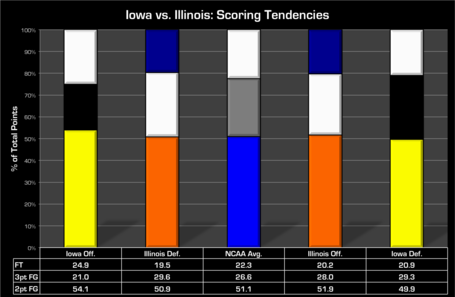 The last time these two teams played, Iowa turned it into a track meet. 71 possessions was not in Illinois' best interest, despite hanging with Iowa fairly well at home. The Illini have actually won 3 of their last 4 games, and 4 of their last 7. In their last 4 victories, they have won by slowing the game down to an absolute halt. In those games, the final possession total has been 57, 57, 59, and 56. Also, in those wins, their opponents have scored 55, 49, 49, and 46 points. It will be difficult to get Iowa down into the 50s (and to limit this offense to 40 something points), but they will try to keep it as low as possible, and the low 60s would probably be their aim against the fastest team in the Big Ten.

Now, while Illinois' defense has been one of the best in the Big Ten this season, I'm not particularly worried about this game. I know I shouldn't take anything for granted this season, but I just can't fathom Iowa losing to a team with an offense as bad as Illinois on Senior Day. So, while I would love the Hawkeyes to just absolutely run the Illini out of the gym in Marble, Basabe, and McCabe's final game in Carver, I really just want a win. For the sake of Fran's (and our) mental health, just please win, and send these guys out of Carver with a victory.