FRANALYSIS: IOWA MELTS DOWN IN THE SECOND HALF

Iowa won the first half in East Lansing, only to come apart at the seams in the second half.

Share All sharing options for: FRANALYSIS: IOWA MELTS DOWN IN THE SECOND HALF

Iowa had the lead at halftime. They then went on to lose by 10 points. 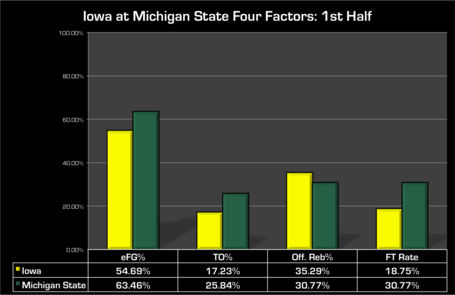 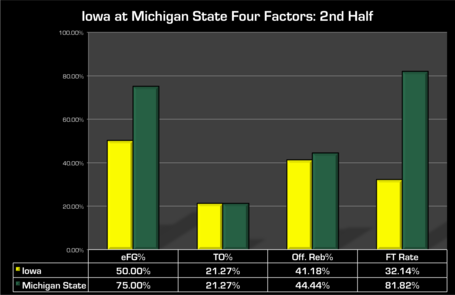 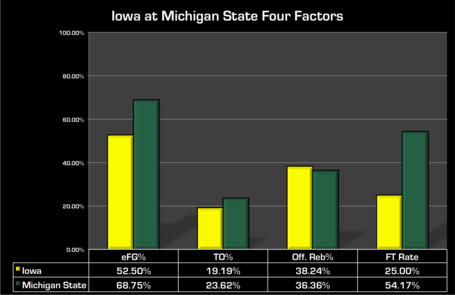 Iowa didn't shoot particularly bad from the field in this game. Unfortunately, Michigan State didn't either. The Spartans were able to build upon their 63.46% first half eFG%, making 75% from the floor in the second half. Just like the last time these two played, Michigan State hit 10 three pointers (5 in both halves), only this time they did it on just 17 attempts, rather than 29. It's really hard to win a game when the other team shoots 58.8% from long range. Oh, and it's also difficult to win a game when the other team averages 1.43 PPP in the second half.

Looking at the bigger picture, Iowa won the turnover category just slightly. That's mainly because they only turned the ball over on 17.23% of their possessions in the first half, while Michigan State gave it away once every four times down the floor. The second half was different, though, as both teams turned it over on 21.27% of their possessions.

With that being said, it was how Iowa started off the second half that began the meltdown:

The Hawkeyes opened up the second half by going scoreless for a little over four minutes. Instead of putting the ball in the basket, they gave it back to the Spartans on 4 of their first 6 possessions after halftime. That allowed Michigan State to go from being down by 2 points, to being up by 7 points. After that full 9 point swing, Iowa was able to briefly pull within 2 points of tying the game at the 12:23 mark, only to see Michigan State begin to blow the doors off.

Iowa did win the battle, overall. Too bad this category didn't matter all that much in this game.

Yeah... Michigan State, the team who ranked #10 in Big Ten play in free throw rate coming into this game, finished with a much higher free throw rate than the best team in the Big Ten. Moving on. 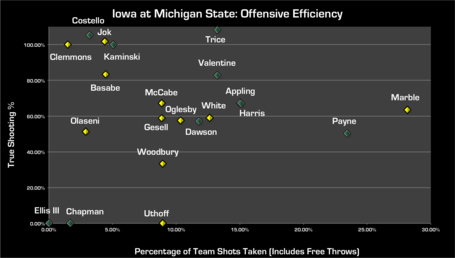 This chart is painful to recap from a defensive standpoint, so I'm going to focus on the offense and leave it up to you to peruse it how your pain tolerance sees fit.

Like so many losses this year, Devyn Marble attempted to put the team on his back, but could only do so much. He went off for 16 points in the first half on 7-10 shooting (2-4 from three point range). Exactly 1 of those 10 field goal attempts was a layup, and he missed that lone attempt. The other 9 shot attempts were either mid-range or three point jumpers, and he made 7 of 9. He cooled off a little in the second half, only scoring 8 points. He finished the game with 24 points (9-17 shooting), 5 assists, and just 1 turnover. Maybe this is a homerish pick on my part, but he's my vote for Big Ten Player of the Year.

The rest of the team was either streaky or non-existent. Josh Oglesby started the game looking like he was feeling it from long range, but he disappeared as the game went on. Aaron White was quiet in the first half, but woke up for 10 points in the second half (albeit too little too late). Mike Gesell had only 7 points and 4 turnovers, Jarrod Uthoff scored 0 points on 0-6 shooting, and Adam Woodbury and Gabe Olaseni were silent most of the game. Zach McCabe was able to put up 8 points for the Hawkeyes, but picked up a technical foul for throwing Travis Trice to the ground and fouled out as a result. In general, it wasn't a great game for Hawkeye players not named Devyn Marble.

The numbers projected Iowa to lose this game to Michigan State, so I'm not totally heartbroken by this loss. I am a little irritated that the Hawkeyes got straight up dominated in the second half, and that the defense continues to be a serious issue. I remain cautiously optimistic, however, that this team can put together a very solid run in the tournament. In order to do that, though, they are going to have figure something out defensively.They just can't afford to keep having teams go off on them like this and expect to survive come tournament time. 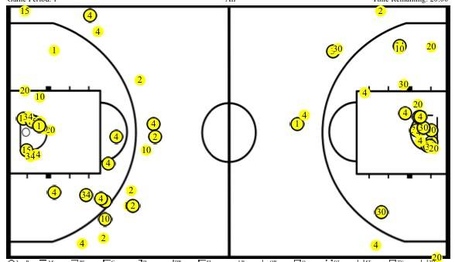