Besides Wisconsin, I can't think of a team I want Iowa to beat more than Michigan State right now.

Here's your statistical preview for the Michigan State game. I recommend using it to supplement Pat's Franimal Planet preview, which will be up later. 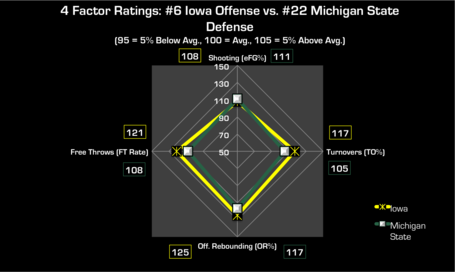 Both sides of the ball look to be great matchups in this one. Iowa has an offense that rates out 15% above the national average in adjusted offensive efficiency (OE+), while Michigan State's defense has been 11% better than the regular D-1 team in DE+ this season. The Hawkeyes are a good shooting team, but we all know they can go cold from the field at times. However, they usually are able to help make up for that by getting to the free throw line, and this scenario is exactly what happened the last time they played Michigan State, when they finished with a 40.63% eFG% and a 89.58% free throw rate. So it should come as no surprise that Michigan State has the slight advantage in contesting shots, but Iowa has the advantage at getting to the free throw line.

As for turnovers, Iowa struggled a bit with them in the first half of the last game against the Spartans, but it all evened out in the second half. Thus, I wouldn't expect Iowa to have a more than normal amount of turnovers during this one. And on the offensive glass, this is a battle between the two best teams in conference play in offensive and defensive rebounding rate. Even without Adreian Payne (one of the best defensive rebounders in the nation) last time, the Spartans limited Iowa's second chance opportunities in the second half to just 18.18% of their missed shots. But Hawkeyes did have a 40% offensive rebounding rate in the first half. Basically, I'm saying this should be a good battle.

When Michigan State Has the Ball 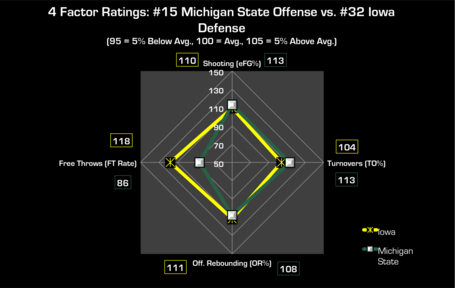 Iowa has yet to keep a team under 1.00 PPP since the month of January, and, as a result, their defense has taken a tumble to #32 in the nation with a 110 DE+. Michigan State has lost three of their last four games recently, and in two of those games the offense was held below 0.90 points per possession. To be fair, those were against two very good defensive teams in Nebraska and Illinois. But still, if you're rated this highly on offense, that probably shouldn't happen. Anyway, despite those games, the offense still has a +12% OE+ on the year.

This Spartan team excels at shooting the ball and not turning it over. They are fairly good at offensive rebounding, but have very few players who can draw fouls with any regularity. The main thing that helped them win against Iowa last time was three point shooting. They were only 4-13 in the first half, but hit 6-16 in the second half and overtime. I've mentioned how Fran's teams are susceptible to good three point shooting because of the whole 3 > 2 thing, so this should probably be what worries Iowa the most in this game. The Spartans like to shoot from downtown, and they have hit basically 40% of their threes in Big Ten play (#2 in the conference). So, again, I would reiterate that Iowa needs to be prepared to close out on the white and green shooters in this one. 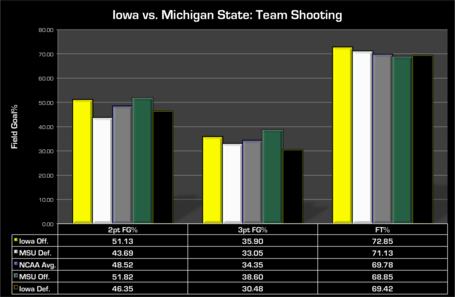 Michigan State is the better shooting team from the floor, mainly due to their three point shooting. Iowa does shoot better from the free throw line, though.

On defense, you can see that Michigan State is holding their opponents to 43.69% from two point range. That's because they have been the 35th best team in the nation in block rate, and #1 in the Big Ten during conference play. Meanwhile, Iowa's opponents have failed to connect on their threes more often than normal this season, although that number has gone up to 33.7% during their conference schedule. 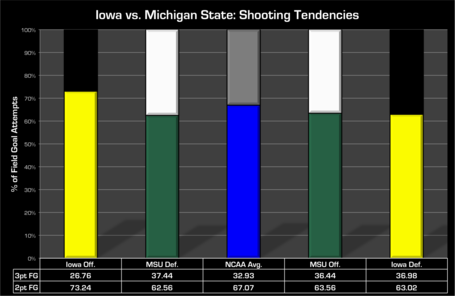 The offenses play stark dichotomies to each other, as Iowa likes transition layups and getting the ball in the paint, while Michigan State prefers shooting from downtown more than the regular D-1 team.

Looking at the other side of the ball, you can see Iowa's attack is different from the norm of what Michigan State has faced this year, while Michigan State's shooting profile is very similar to Iowa's average opponent. 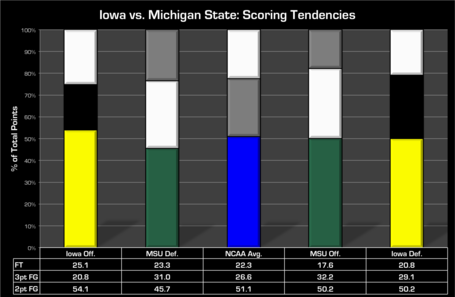 Unsurprisingly, Iowa gets most of their points from two pointers and free throws, while Michigan State relies on threes more.

Overall, the numbers like Michigan State at home in a close one. Interestingly enough, the projected PPP are basically what each team had in the last game they played each other. The possessions, however, are much, much different. Michigan State was a banged up team last time they played Iowa, and they seemed to make a conscious effort to slow down Iowa's transition game. They did this so much so that the game only had 60 total possessions in regulation time. That's ridiculously low, and the game ended with 68 after including one period of overtime. I'm curious to see if Izzo decides to try to slow Iowa down in a similar manner this time around too. Michigan State isn't a blazing fast team in terms of tempo, where they sit middle-of-the-pack out of the entire country. But they are quicker than the norm in terms of average possession length on the season according to Kenpom, and they only take 3% fewer of their shot attempts in transition than Iowa does, according to Hoop-Math. So that explains why the numbers project 71 possessions. But it certainly didn't happen that way last time, of course.