It may have been closer than we would have liked, but a win in the Big Ten is nothing to be discounted this year.

Occasionally I like to post a chart showing the amount of points both teams score in each of the ten minute quarters of a game. I like to do this because sometimes it is very interesting to see at what point in the game teams score most of their points. This is one of those games where I find the chart to be particularly interesting: 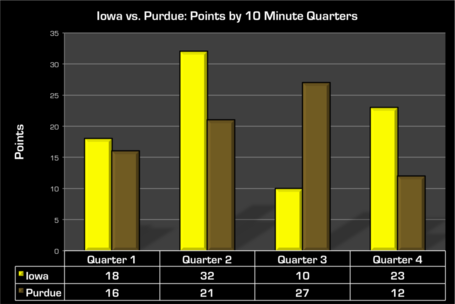 Iowa started the game off slow. Unfortunately, the chart above doesn't quite capture that fact completely. Iowa may have scored 18 points in the first ten minutes of the game, but they also had only 12 points eight minutes into the game. What the chart does capture, however, is that Iowa clearly took the offense out of neutral and put it in drive to end the first half. From then until halftime, Iowa scored 38 points in the final twelve minutes of the first half and 32 in the final ten. The defense wasn't great to end the first half, but it wasn't a huge deal because Iowa's offense exploded.

Then, halftime happened. Iowa came out of the locker room flat, scoring only 10 points in the first ten minutes of the half while yielding 27 to Purdue. The Hawkeyes even trailed the Boilermakers 60-64 at the 10:00 mark, blowing a 13 point halftime lead. Purdue would have that lead for about two more minutes, before an Aaron White three pointer put Iowa up by one; a lead which they would never give back, as the defense finished strong, holding Purdue to just 12 points in the final quarter of the game. 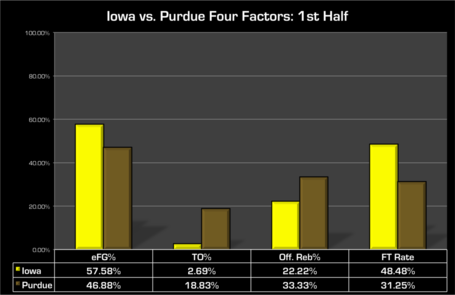 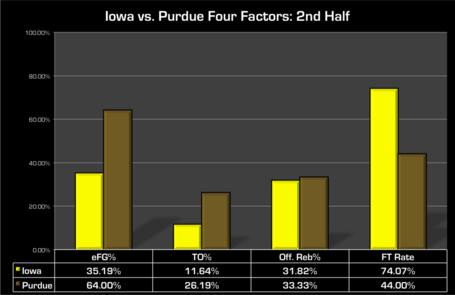 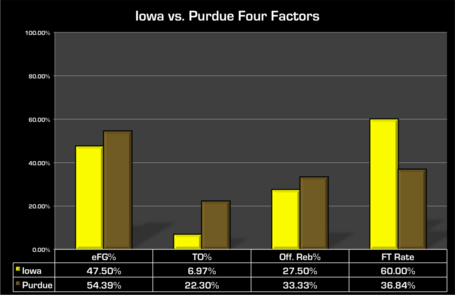 Iowa didn't put on the greatest shooting performance of the year. Most of that happened in the second half, but part of that was how they started the game, too. To give you an idea of just how much Iowa's offense went off to finish the first half, it should be noted that they had an 18.18% eFG% and 0.70 PPP when a Gabe Olaseni field goal gave the Hawkeyes a 12-11 lead. Up to that point, Iowa was 2-11 from the field, but was able help offset a terrible shooting by getting to the line 8 times (making 6 of them). However, once that Olsaseni field goal fell, Iowa opened the offensive floodgates for the rest of the half. They finished the half 16-22 from the floor (77.27% eFG%) and 6-8 (again) from the free throw line. Once halftime rolled around, Iowa had built their eFG% up from 18.18% to 57.58% and gone from 0.70 PPP to 1.34. Meanwhile, Purdue was at 46.88% and 1.00, respectively.

That all went to hell after halftime, though, and Purdue actually outscored Iowa in the second half 39-33. Iowa's offense could only muster a 35.19% eFG% and 0.96 PPP, while Purdue put up a 64% eFG% and 1.13 PPP. Iowa was able to stop the bleeding, holding Purdue to only 12 points for the final ten minutes of game time. But, really, Iowa won this game thanks to their twelve minute explosion in the first half. If they hadn't gone off like that, this could have been another gut-punching loss.

Turnovers, or more accurately, takeaways, played a crucial role in this game. Iowa's pressure defense seemed more relentless and effective in this one, and it led to 12 of Purdue's 16 turnovers being forced steals. Since Iowa was outshot by the Boilermakers and they were unable to keep A.J. Hammons away the offensive glass, the 16 empty possessions that Purdue had thanks to losing the rock was extremely important to this Iowa victory. Because of the huge disparity in turnovers, the Hawkeyes had 10 more scoring attempts than Purdue did (including free throw attempts). They also outscored Purdue 18-4 in points off of turnovers. So yeah, this category was kind of important.

We've all heard about how inconsistent A.J. Hammons has been this year. He's got all the talent in the world, but sometimes he just disappears. A lot of his inconsistency has had to do with him getting in foul trouble early, but that didn't happen on Sunday. Hammons didn't pick up his fourth foul until there was only 1:55 left in the game. Because he was able to avoid racking up fouls early, he played 36 minutes and abused Iowa's bigs on the boards, sucking up 14 missed shots; 5 on the offensive side of the ball and 9 on the defensive end.

This category is slightly inflated (like usual) because Iowa shot 8 free throws (making 7!) in the final minute of game time. Even without counting those 8 free throw attempts toward the final total, Iowa's 46.67% free throw rate would still be more than Purdue's 36.84%. The Hawkeyes missed the front end of some one-and-one's in the second half, and Matt Painter even had his team foul Mike Gesell down two with 0:41 left. That's normally not a fouling situation, since getting a defensive stop still gives you plenty of time for a final shot. However, Gesell has struggled from the line this year, and the logic makes some sense. Luckily, Gesell made both free ones, and Iowa went closed the game 7-8 from the stripe. 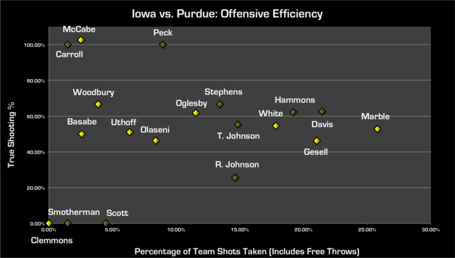 Considering Iowa's 47.50% eFG%, it should come as no surprise that nobody for Iowa really pops off the chart. Devyn Marble put up another MVP-like performance against Purdue, scoring 21 points on 9-18 shooting and going 2-4 from the line. The veteran Hawkeye had 0 turnovers, 5 assists, and 4 steals. He was also able to bank home an impressive layup while falling away from the left side of the basket and being fouled by A.J. Hammons at the same time. That big shot came with 2:39 left in the game, and that basket, plus the subsequent free throw, increased the Hawkeyes lead to five from two.

Aaron White had a double-double, with 15 points and 10 rebounds (4 offensive boards). White was back to his foul-drawing ways, scoring 8 of his 15 points from the free throw line. He also threw down one of his usual dunks, and even made the huge three pointer that I mentioned earlier. He didn't shoot particularly well from the field (3-9), but he did fill the box score with 2 assists, 1 block, and 2 steals.

Mike Gesell continued to get his points at all costs, even if that meant making only 3 of his 11 field goal attempts. Fortunately, Gesell made 8 of his 11 free throw attempts, and also had 3 assists and 2 steals of his own. So, that helps. And, additionally, Josh Oglesby continued to shoot pretty well, putting up a 61.80% TS% (includes going 3-4 on his free throws), on the way to 11 points and 3 steals himself. Not bad.

This game gave us all more anxiety than it probably should have, but nothing seems to come easy in the Big Ten nowadays. As evidence, I present to you this past weekend: Illinois beat Michigan State, Indiana beat Ohio State, and Penn State made things very interesting against Wisconsin. And, while Michigan didn't really struggle too much with Minnesota, they did just about lose to this same Purdue team last Wednesday. My point being: nothing comes easy in the Big Ten this year. At this point, a win is a win as far as I'm concerned. And I'm sure Iowa probably feels the same way. 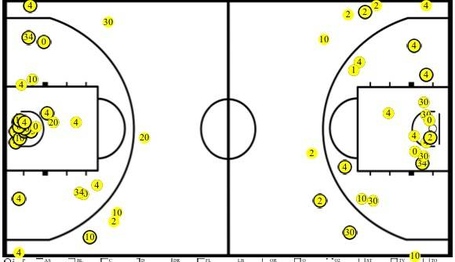